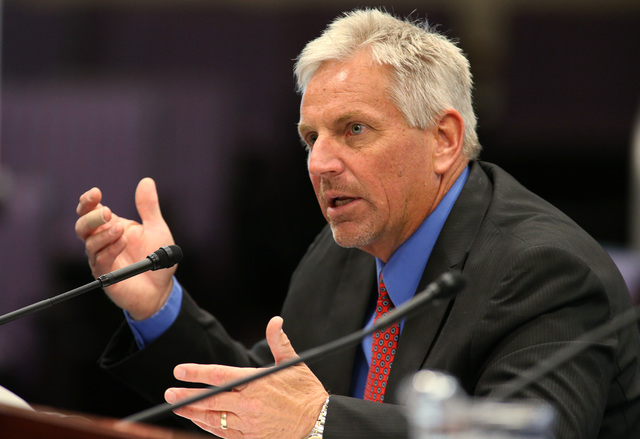 CARSON CITY — With drought gripping Nevada and much of the West, the state’s top water official and a state senator said it’s time to inventory how much water there is and who owns what by tidying up the books on water rights that pre-date state law.

“Clearly if we’re going to establish a water inventory … we have to understand what water is available, what is permitted,” state Sen. Pete Goicoechea, R-Eureka, told members of the Assembly Government Affairs Committee during a hearing April 22.

At issue are so-called “vested” rights initiated by putting water to beneficial use before state law was enacted setting regulations for surface water use in 1905, artesian groundwater in 1913 and percolating groundwater in 1939.

“We have to address those pre-statutory claims if we’re ever going to know who has those water rights,” Goicoechea said, adding that, it’s difficult to determine whether water resources within a particular basin are over-appropriated or if water is available.

Senate Bill 485, which the Senate passed unanimously, would require anyone who claims a pre-statutory water right to submit proof to the state engineer within 10 years, by 2025. Goicoechea and State Engineer Jason King conceded the task could take longer.

If no proof is offered by the deadline, water claims would be extinguished.

King said his office has about 8,800 vested claims on file. “I know there’s more out there,” he said.

Having claims on file would make the process easier when pre-statutory water rights are adjudicated by a court, King said. “If people don’t do their due diligence, than it’s deemed to be abandoned. That’s the whole purpose of this bill.”

State water law is based in part on a pecking order — those who hold the oldest water rights have first dibs. It also requires that water be put to beneficial use. Another “use it or lose it” provision says if water isn’t put toward its permitted use, it can be issued to someone else.

King and Goicoechea conceded finding proof of water rights could be difficult because some might have been passed down through the generations, scribbled on affidavits or other documents not recorded.

Still, the more time that goes by, the more difficult the task will become, they said.

“If we don’t put the pressure on to get it started, we’re never going to get there,” Goicoechea said.

Nevada is the driest state in the nation, receiving about 9 inches of precipitation annually. Excluding the Colorado River, the state gets 4.5 million acre-feet of surface water from runoff and another 2 million acre-feet from groundwater in 256 water basins around the state, according to the state engineer’s office.

One acre-foot is enough to supply two average Las Vegas Valley homes for more than a year.

In contrast, the Columbia River at The Dalles in Oregon averages a water flow of 200,000 cubic feet per second.

To put it in perspective, the amount of water passing through that river gauge every 16 days is equal to the entire annual surface and groundwater supply in Nevada, the state engineer said.