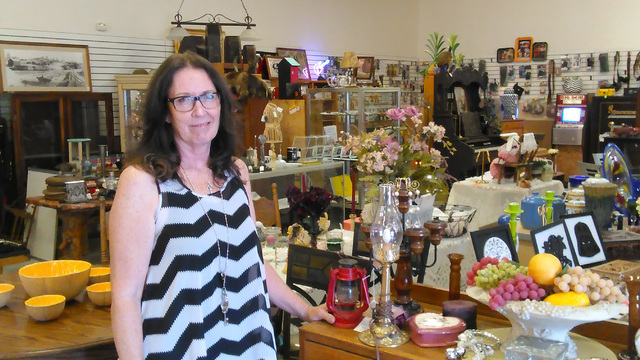 Nye Emporium owner Diana Spencer-Saum opened her 850 S. Lola Lane location in May. Business has exceeded her expectations and she plans to host a grand opening later this year. Selwyn Harris/Pahrump Valley Times

Nye Emporium is described as a business that features a unique way to shop.

Owner Diana Spencer-Saum, a 20-year resident of Pahrump, said the 4,500 square-foot facility is sure to have something of interest for virtually everyone, including antiques, art and collectibles.

We also carry furniture, jewelry, sports memorabilia, vintage items, and so much more, she said. We have a lot of glass and collectibles from Coca-Cola and Pepsi. I also have a lot of Native American items such as wood carvings.

Consignment shops operate by offering to sell an item provided by a vendor.

Once a sale is made, the shop takes a percentage of the sale, while the vendor pockets the rest.

Consignment shop owners also pay the sales tax on the transactions as well as maintain the item.

At times, some shop owners perform repairs on the item, if necessary.

Out of the handful of consignment shops in the Pahrump Valley, Spencer-Saum said her shop stands apart from the rest.

She noted that several of her vendors are actually on site to answer questions from prospective customers.

I do have a couple of vendors who are here with their booth because they have a specialty type of item that Im not familiar with, she said. They can be here and explain to the customer, if they have antiques, or especially an item where a certain expertise is required. Most of our vendors are not here, but they just come in and drop off the items and thats it.

Although many consignment stores have a time limit on how long the items will be displayed, Spencer-Saum said she doesnt necessarily adhere to that method.

I dont really have a time limit at this point because things have been moving pretty well out the door, she said. Items have been coming in and the prices are set at such a reasonable price that the items go.

Additionally, she said that she not only welcomes competition from similar shops, but she actually embraces it.

Competition is good and there are other consignment stores that I refer people to all of the time if theyre looking for something that I dont have. Its a different type of consignment store and everybody has their own way of doing things. I have referred my customers to other people and Ive had customers who have been referred to me so it goes both ways.

At present, Spencer-Saum has roughly 10 vendors she is doing business with, which is enough for the time being.

As far as vendors coming in, I do have a waiting list, she said. I have filled up all of my vendor spaces and right now I just made a spot for the 11th, and I am trying to get available space together for people who have a handcrafted items.

She has plans to host a grand opening perhaps later this year.

I havent come up with a date yet, because I want to make it a big event, so its going to take some planning, she said. As far as the response from people coming in, the feedback that I have gotten has been great.

Prospective customers need not worry about driving to Nye Emporium.

Spencer-Saum noted that many of her items can be viewed via social media, at www.nyeemporium.com.

I dont have every item online but I do try to post the new inventory of things that have come in each week, especially if its something unusual. The entire month of July I have been doing a customer appreciation day and I have been giving things away each Sunday.

At present, business hours at Nye Emporium have been flexible.

Im pretty much open every day but I will be changing my hours and adding more days because business has picked up quite a bit, she said. I need to have those extra days in order for people to bring items in. Since we opened, everything has been great and everyone has been super nice.