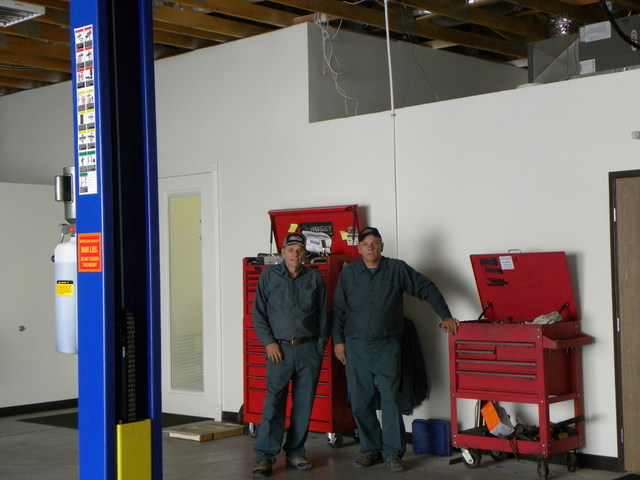 When the Broadhead family gets into a project, they do it in a big way. This will be the fifth business for the Broadhead clan. The newest venture for Chad and brother Jabez “Rosco” Broadhead is an upscale automotive repair shop at 2340 E. Postal Road, behind the post office and across the street from Twisted Sisters Boutique.

Chad said, “We looked this town over for something that would equal the ambiance people would find in a dealership. It had to be clean and comfortable for the customer … some place where they want to come in.”

The space is the former location of Jerry’s Xtreme Machines.

He said the project has been ongoing for a few months with cleaning, painting and remodeling the waiting area and office. “We set a date two months ago to open not realizing Monday was a holiday,” Chad said.

The brothers have installed a new lift system and the bays are as clean and shiny as the signage over the front dors.

“Our family has been in the car repair business for 60 years,” Chad said. Rosco just recently closed a shop on Homestead Road and said that space is going to be used as a warehouse for parts. “We have another family member closing a shop in Utah and all of his parts are being trucked to Pahrump as well.

Chad said he did a lot of research and set out to see what other repair shops in town were doing and how they treated their customers. He said, “I deliberately installed a new radiator in my truck and belts and even the serpentine belt. Then I took my truck to four different shops here to see what I would get back after telling the shops I’d replaced the radiator and asked them to see if anything else was wrong.

He said three of the four told him he needed a new serpentine belt, which is an expensive installation.

“I don’t want to name them, but I can say this. We aren’t going to say it needs fixing if it doesn’t. We will also never give a customer a quote and not perform that service. If we do see something wrong, we will get the customer involved, not just make the repair without permission.”

Rosco said it can be something as simple as an oil change. These new vehicles, especially diesel, can require some expensive lubricant. I’m not going to do that oil change if we can’t get the right lubricant. He gave an example of running an oil-change special at another shop and the vehicle owner was not happy when he was adamant about the inexpensive oil change and refused to sign a waiver.

“We could get the oil but it was a $120 oil change. If I would have changed his oil with what we were using in the special it would have voided his dealership warranty. Not going to do that.”

Between the Broadhead boys they have 60-plus years of experience. “We are qualified to work on cars from A to Z,” Chad said. “We can fix any make, any model, domestic and foreign.

The shop owners said if there are parts to be ordered, they will stick to local suppliers. “It’s important to keep what revenue we can here. Some of the suppliers are big corporations but a percentage of what the individual store makes stays here,” Chad said.

The location offers a fenced, locked storage lot if a vehicle is waiting on a part. “Customers don’t have to worry about security. We’re close to the Nevada Highway Patrol office and Nye County Sheriff’s Office isn’t far away,” said Chad.

“This isn’t going to be a fly-by-night business, here one day and gone the next. We’re getting set up for retirement here. I’ve made a lot of money in Pahrump and spent more than I made. We’ve poured everything into this to give good, professional service to Pahrump. We offer lower hourly rates than some places, too.”

He said all of the Broadhead businesses have contributed to local charities like Girl and Boy Scouts, through the church and “anything to do with kids.