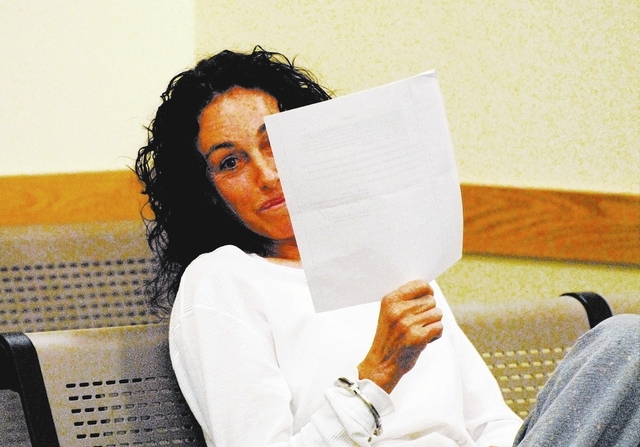 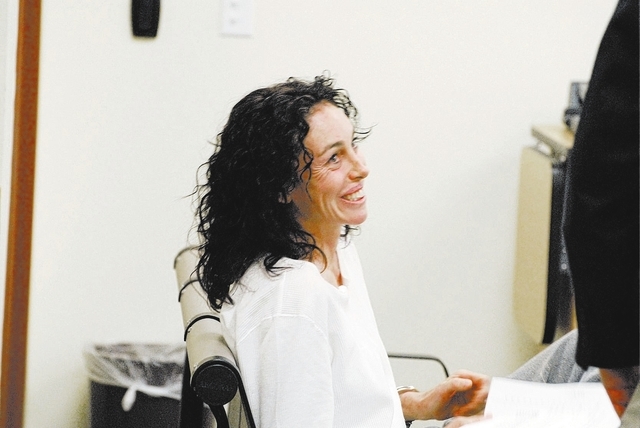 Former Hollywood madam Heidi Fleiss was arrested early Tuesday morning after police say she was driving under the influence of marijuana just more than a day before a scheduled court appearance on charges related to a marijuana grow operation discovered at her Pahrump home earlier this year.

According to the Nye County Sheriff’s Office, detectives stopped Fleiss, who was driving a 2010 Toyota FJ Cruiser, on State Route 160 after a records check revealed her registration was suspended and she did not have a valid driver’s license.

A declaration of arrest in the case notes Fleiss nearly backed her vehicle into the arresting detective on scene before exiting the car.

During a search of her vehicle, police reportedly discovered four ounces of marijuana and about $10,000 in cash, which they seized in connection to Fleiss’s arrest.

Justice of the Peace Ron Kent deemed there was probable cause for the arrest during Fleiss’s first appearance on the charges late Tuesday morning in Pahrump Justice Court.

Fleiss’ attorney Jason Earnest explained to the court that while his client was arrested on a charge of possession of an illegal substance with intent to sell, his client was in no way a drug dealer.

The attorney explained he believed the specific charge was related to the amount of marijuana found in her vehicle, not an actual sale. Additionally he stated the money found in the vehicle was not from drug sales, but rather money she planned to pay him as a retainer to represent her in court on another case where she has been charged with opening or maintain a place for the use, sale, or gift of a controlled substance.

Fleiss was charged in the other marijuana case last month after Nye County Sheriff’s deputies reputedly discovered 392 marijuana plants growing at her Pahrump home in August.

“In regards to this case, you read the deck sheet (declaration of arrest) and what the sheriff’s office says they’re going to do and what the DA does is going to be a little bit different. It’s important to point out that they’re alleging her with possession with intent to sell only because she had four ounces, which is a quarter-pound of weed. It’s a lot to you and me, but not a lot in regards to what we see come through here. She was also alleged to have $9,000, almost $10,000, on her. Judge, I’m telling you with a straight face she was coming to meet with me at 11 o’clock to pay my retainer, which was that, and then also talk about how we’re going to handle tomorrow’s court date,” Earnest said.

He asked that the judge look at the new charges for what he said they truly are, a DUI case, not a drug sales case.

“She is not a drug dealer. She is not. She is somebody with a substance abuse problem who addressed it and then relapsed. She is somebody that has a such a huge upside, such a huge IQ, but is ravished by this drug addiction. There are some issues that we have, I’m not going to speak for the state, I expect them to file the DUI charge, I expect to file for possession of marijuana, I wouldn’t be surprised if they file an unlawful use once the lab comes back. I would be shocked and amazed though if this DA or any of the DAs over there look me in the eye and file a possession with intent to sell given the facts and circumstances. She was completely compliant with Det. (David) Boruchowitz with the stop,” the defense attorney said.

As Kent reviewed Fleiss’ court records, he noted Fleiss has a history of speeding and other traffic related offenses dating back to 2006.

“I do note the defendant has had numerous contacts with the criminal justice system dating back to 2006, speeding, insurance, possession of controlled substance not for purpose of sale, speeding, safety belts, speeding, speeding 2010, another speeding, reckless driving in 2011, speeding in 2011, more speeding in 2012, maintain a place to use, sell, gift narcotics, that’s an open file, and the lady was summoned into court and was not arrested. And then yield to right of way in 2013 and that’s an open case,” the judge said. “What disturbs me is you’re operating a vehicle without a license, registration or insurance and have a history of traffic infractions.”

Fleiss acknowledged she sometimes speeds, telling the judge it was likely because she wasn’t used to driving through areas where there was little to no traffic in her way.

“Can I just mention one thing about the driving? In Los Angeles there’s so much gridlock you’re lucky to go 35 miles per hour. Here with these open roads, I’ve just never seen anything like it. You just go and it’s hard to get used to,” she said.

Although Fleiss and her attorney asked the judge to release her on her own recognizance from jail, Kent said this was simply one driving infraction too many and set her bail at $22,233 bond or $1,750 cash.

The judge then advised Fleiss to go and get her license so she can avoid being charged with driving without a license again in the future.

“It will feel so much better to do that,” she agreed.

Fleiss is scheduled to be back in court for a pre-trial hearing on both this case and the marijuana grow house case on Jan. 16, 2014.

Earnest told the court it was likely his client would be able to bail out of custody as early as later that day.