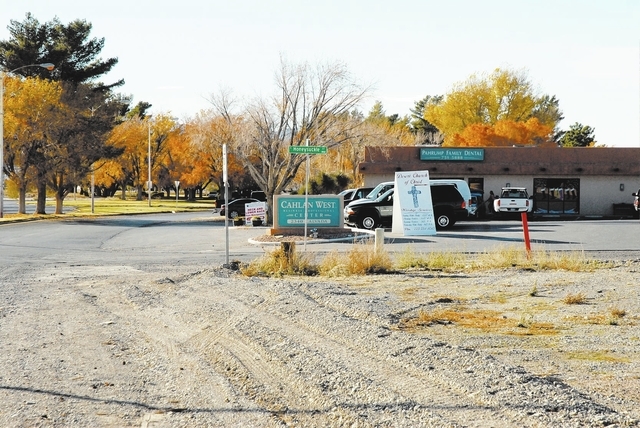 The county is looking at building sidewalks along one block of Calvada Boulevard from Highway 160 to Mount Charleston Drive. An additional road reconstruction project is also awaiting a report on available funds.

The Regional Transportation Commission Monday discussed that project and a request to realign Manse Road for the Adaven development as part of the road improvement project.

The RTC already decided to repave a one block section of Calvada Boulevard, which leads up to the county complex on the Calvada Eye, with 14-foot lanes, also a bike lane, curb and gutter. The sidewalks would extend walkways from Highway 160 around the corner.

Commissioner Dan Schinhofen had concerns about flooding at the Highway 160 intersection with Calvada Boulevard, especially after the deluge from July 28.

The RTC previously talked about extending repaving 150 feet beyond the intersection with Mount Charleston and Honeysuckle Drive, as it begins to deviate around the Calvada Eye.

But Don Skalicky, road supervisor, said the $66,000 cost of the curb and gutter, when combined with $87,000 it would probably cost to pave sidewalks on both sides of the street would put the total cost of the Calvada Boulevard improvements at $515,000. Fanning said that’s $70,000 over what the RTC previously approved.

RTC member Cameron McRae made a motion to just build sidewalk on the south side of the street all the way to the Calvada Eye as an option for discussion at a future meeting. There are businesses on the north side with driveways leading onto Calvada Boulevard.

Making improvements for the county complex was clearly the intention for bumping this paving project up to the top of the list.

Commissioner Frank Carbone said the sidewalks would feed into possible walking trails around the Calvada Eye. Nye County previously applied for a state grant for the walking trails but was unsuccessful. He said the county complex will see more traffic once the One Stop Shop is opened.

“If we want to make it a first class facility or compound, we have to figure out a way to tie it all in,” Carbone said.

McRae said he couldn’t recall any road improvements being made to that section of Calvada Boulevard since Preferred Equities Corporation came to Pahrump in the 1970s.

On the other matter, the Capital Improvement Plan Advisory Committee had moved Manse Road up to the top of the list of roads for reconstruction using impact fee money. Fanning said Adaven (Nevada spelled backwards), which was formerly known as Mountain Falls South before a bankruptcy, had plans to start building homes on the south side of Manse Road by the end of this year. But in reviewing the economy recently, it postponed its plans. The company has a development agreement on file with the county.

“They know they have a development agreement that expires in 2029, so they don’t want to pull out of anything. They still want to go forward and they still want their project to be viable. However with the downturn in the economy they don’t look at anything happening for two or three years,” Fanning said.

Adaven wanted the county when Manse Road is repaved from Hafen Ranch Road to Jane Avenue, to move the road 40 feet south to line up to where the company would do curb and gutter work. The county plans to reconstruct a section of Manse Road between Hafen Ranch Road and Fox Avenue with impact fee money; he said there are funds to continue the improvements all the way to Homestead Road. It would include two, 15-foot travel lanes and two five-foot wide bike lanes.

Lacy said the development agreement with the company could always be renegotiated.

McRae, a former county commissioner until 2002, said he’s always supported participation by developers in road paving projects. McRae said if the county didn’t have to give up anything he’d support changing the development agreement.

RTC members said the road needs attention immediately without waiting for the company to start building. Mountain Falls South was originally supposed to have 5,160 residential lots before the construction boom collapsed.

“That’s a crappy ass road that needs to be redone,” McRae said.

“I live over there, I understand the need to fix it. I don’t see the need to use taxpayer money and do it again in three years,” Lacy said.

Schinhofen wanted the road reconstruction, if possible, by July 2014.

Fanning said there’s other problems to sort out first on Manse Road, like utility lines, the district attorney’s office has been asked to work with Utilities Inc. of Central Nevada over a collapsed sewer line and there’s two wells in the way. He said there were plans to start on the Manse Road reconstruction last summer before the flooding problem and the sewer issue. Fanning said he’ll ensure there’s no right-of-way to purchase.

“Manse Road certainly needs to be done, there’s no doubt about it. It’s in horrendous shape. We spend more money on it than to re-treat this road and get another 15 to 20-year life cycle,” Fanning said.

“I want the road done as soon as we can get it done, if that means without Adaven, without moving it over, then I’m good with that. I’m also concerned if they could pave and we could do three lanes now, I would prefer to do three lanes,” Schinhofen said.