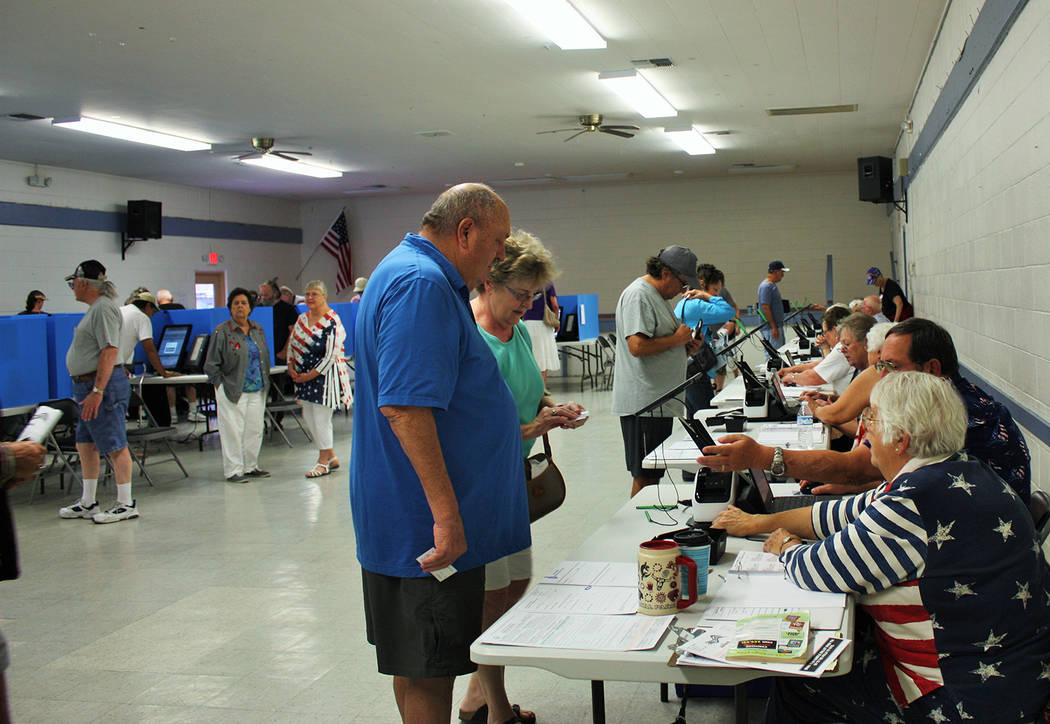 Robin Hebrock/Pahrump Valley Times The Bob Ruud Community Center was bustling with activity on Tuesdaym June 12 as Nye County residents cast their ballots in the 2018 Primary Election. Friendly volunteers are shown helping a voter sign in and receive his voter card. 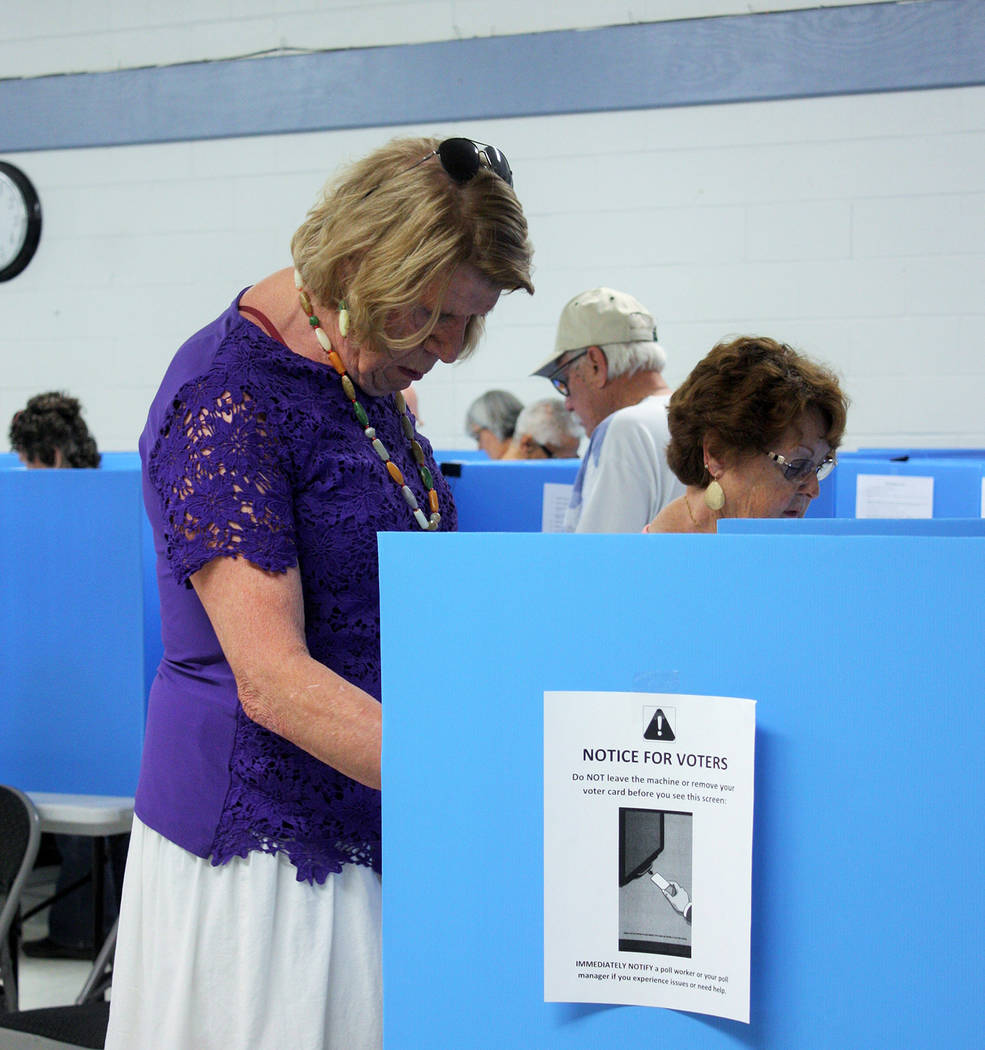 Robin Hebrock/Pahrump Valley Times For many, taking part in the election process is serious business and voters could be seen carefully casting their votes throughout the June 12 primary. 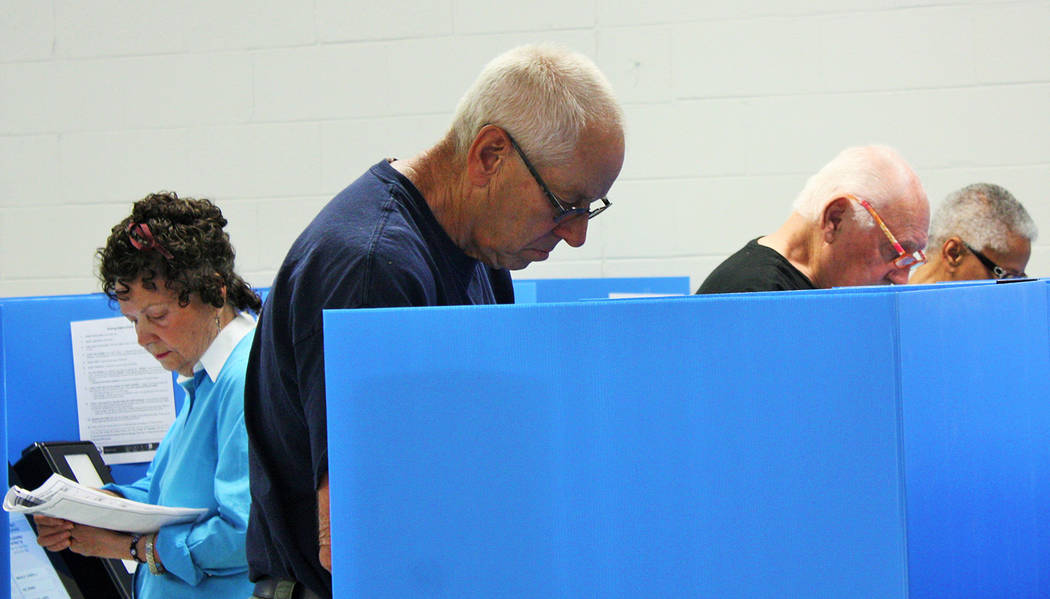 Robin Hebrock/Pahrump Valley Times In the background, a voter refers to her sample ballot before voting while those around her focus on their own ballots. 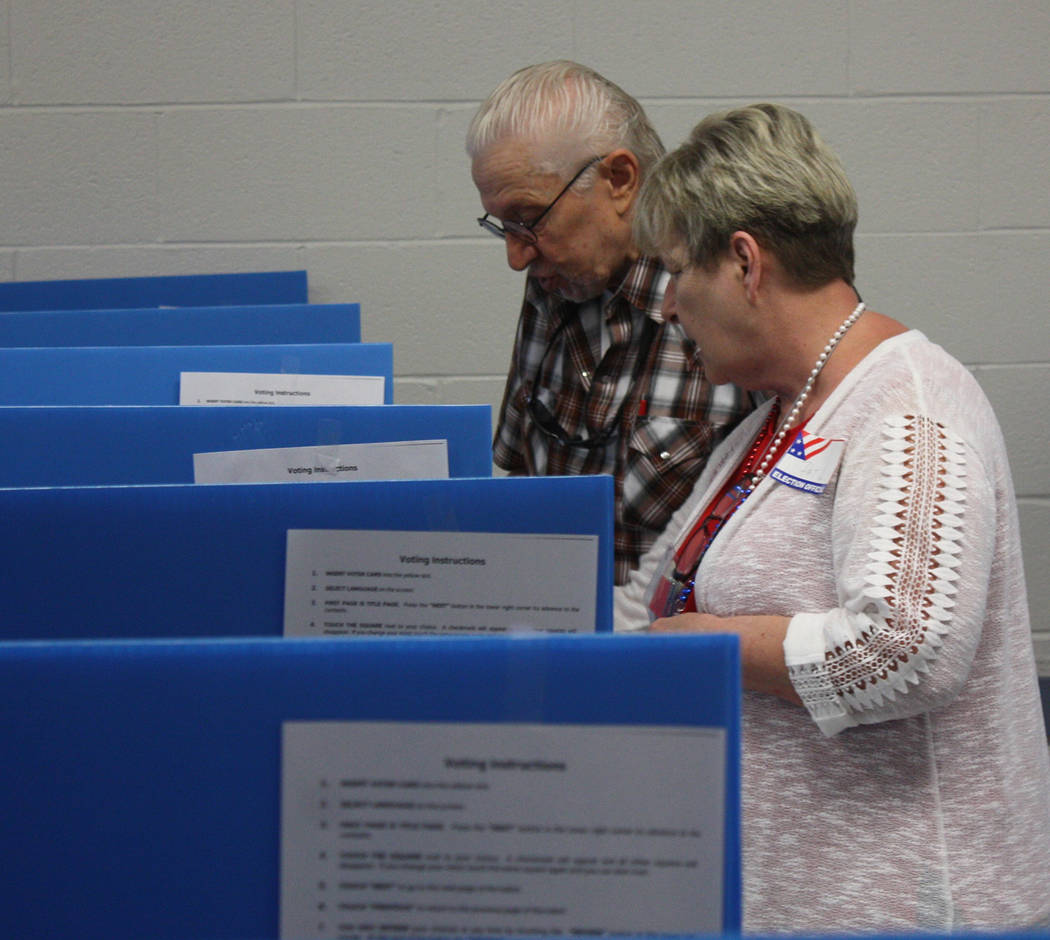 Robin Hebrock/Pahrump Valley Times An election site workers is pictured assisting a local gentleman in getting to know the new Nye County voting machines, used for the first time this primary election. 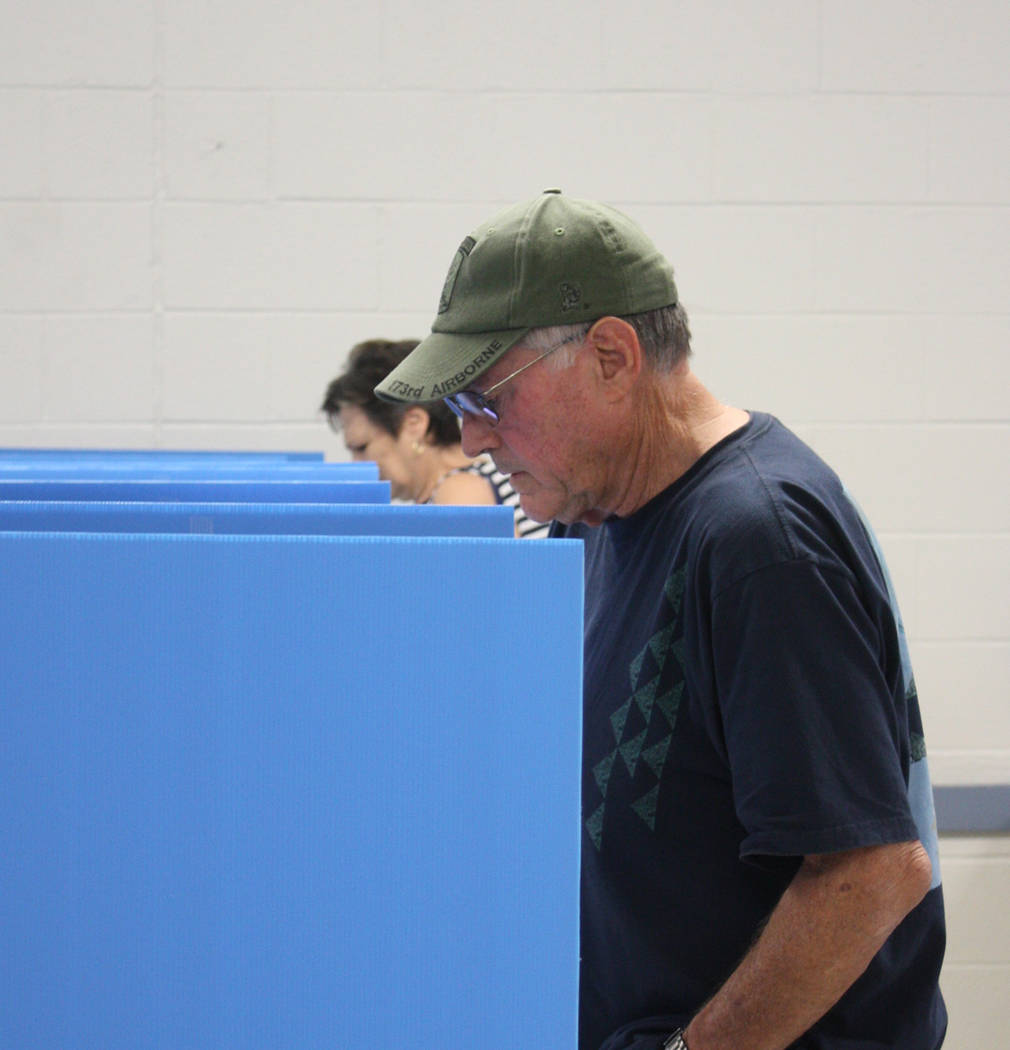 Robin Hebrock/Pahrump Valley Times Another view of residents expressing their voice in the election. 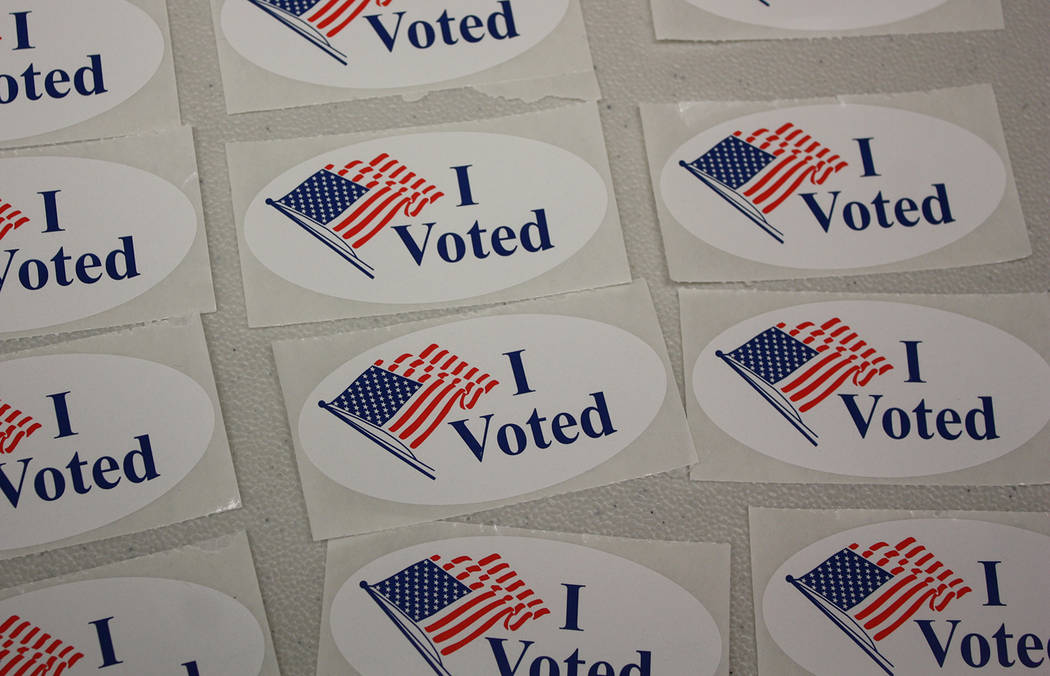 Robin Hebrock/Pahrump Valley Times "I Voted" stickers were proudly displayed by thousands of the voters who made their opinions known through the 2018 Primary Election.

The 2018 primary election took place yesterday, Tuesday, June 12 and Nye County residents are learning who managed to battle their way to the top in pursuit of an array of different elected posts. The toil is not at an end, however, as many of the primary winners will have to fight it out in the 2018 General Election as well.

Undoubtedly, one of the most furious struggles in the Nye County primary campaign season was that between Nevada Assembly District 36 incumbent James Oscarson and businessman Dennis Hof. The two were no strangers to each other, having fought over the Assembly seat in 2016 as well.

This district includes portions of Lincoln and Clark counties in addition to Nye County. The statewide results as of 9:30 p.m. showed Oscarson was in the lead with 42.26 percent of the vote or 598 votes while Hof was showing 35.83 percent or 507 votes.

However, only a small portion of the votes in this race was in so the ultimate result is still entirely up in the air. The third Republican in the primary, Dr. Joseph Bradley, surprised many by bringing in 310 votes or 21.91 percent. Whoever ultimately scores the District 36 victory will move on to the general election to square off with Democrat Lesia Romanov.

Locally, Nye County results were only the votes cast by mail-in ballot, absentee votes and early voting numbers were reported as of 9:30 pm.

In the race for commission District 5 incumbent Dan Schinhofen and Debra Strickland were nearly neck and neck, with 243 votes to 248. District 5 contender Dwight Lilly had 179 votes reported by 9:30 p.m. and Leo Marchetti showed just 44. Whoever secures the highest percentage of the vote in this race will be declared the winner, as no Democrats or third party candidates registered.

The Nye County Commission District 4 primary included four Republicans and the race was a close one as of press time, with Leo Blundo, Ron Boskovich and Tina Trenner all running a close race. Blundo was marginally ahead with 209 votes while Boskovich was showing 197 and Trenner 185. The fourth candidate, Walt Turner, had just 77 votes. The winner of this contest will head to the general election where they will face off with Democratic candidate Richard Goldstein.

The Nye County district attorney’s race also had a fairly narrow gap between the candidates but incumbent Angela Bello was holding a lead of roughly 200 votes, with 1,522 cast for her and 1,383 cast for her opponent Chris Arabia. Whoever takes this race will be challenged by Democrat Nicholas Del Vecchio in November.

Though not traditionally a race that draws a large amount of attention, the Nye County treasurer’s post included well-known county faces and therefore, a bigger interest. Current Nye County Commissioner Butch Borasky and former Nye County Manager Pam Webster each decided to pursue the seat, along with John Prudhont and Mary Dawn Zlotek. Webster was holding a lead as of press time with 1,025 votes to Borasky’s 722, Prudhont’s 720 and Zlotek’s 421. As Independent American Lance Schaus has filed for treasurer as well, this race will continue to the general.

Though the results were not final, the public administrator’s race was something of a blowout by 9:30 p.m. with sitting administrator Ginger Stumne holding a commanding lead of 2,009 votes to opponent Oren Hampton’s 746. This race will also be determined by the primary.

With the widest pool of contenders in a Nye County-specific primary, the Nye County Sheriff’s election was a major point of interest for voters. As many might have expected, incumbent Sheriff Sharon Wehrly and former Sheriff Tony DeMeo were far ahead of their competition as of 9:30 p.m.

Wehrly was leading with 1,773 votes while DeMeo trailed her slightly with 1,452. The other eight candidates had varying amounts of votes, ranging from only 18 for Tasha Pfaff to 769 for David Hiebert. As a nonpartisan race, if no single candidate secures more than 50 percent of the vote, the two top vote-getters will advance to the general.

The nonpartisan Pahrump justice of the peace race was another with a large group of candidates, six in total and the situation with this office is similar to that of the sheriff’s race. Lisa Chamlee was ahead of the pack with 2,112 votes while former Nye County Commissioner Frank Carbone had 1,011. Randy Jones followed with 575, Warren Pawliuk had 427, Richard Hamilton claimed 135 votes and Robert Martin pulled in 109. If Chamlee is able to garner more than 50 percent of the total vote she will be declared the winner. Otherwise, the top two vote-getters will head to the general.

There was a single Nye County School Board of Trustees seat available in the primary and four contenders trying to secure it. By press time Mark Owens was leading at 272 votes to Donald Rust’s 138, Ray Grant’s 97 and John Norvell’s 93.