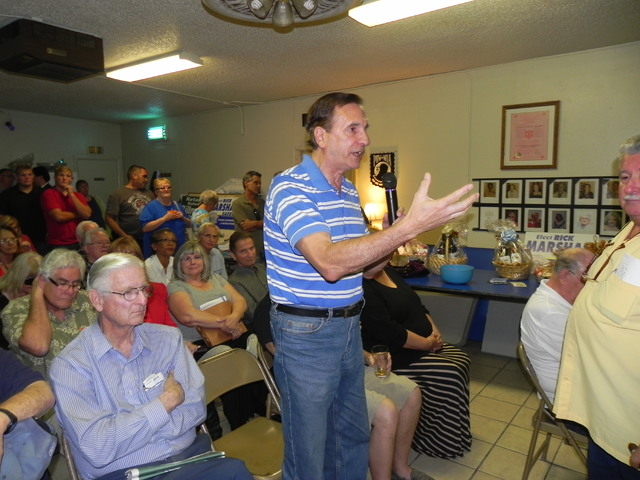 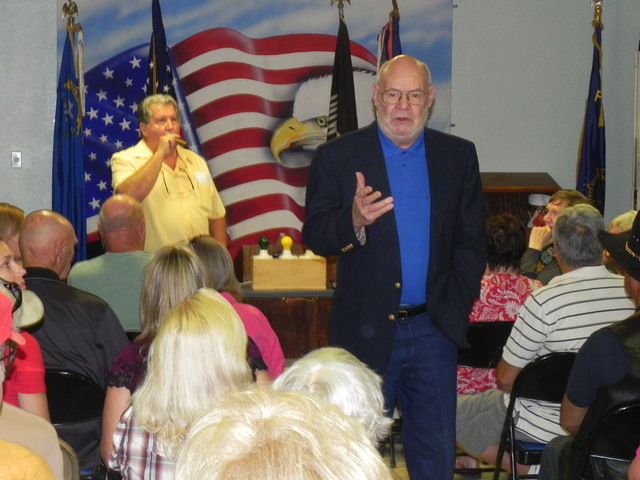 The main bout of the evening may have been the sheriff’s candidates debate, but the under card generated some excitement at Veterans of Foreign Wars Post 10054 on Thursday night.

“I’ve spoken to maybe a half a dozen deputies who tell me it’s up to them to remember when to show up for trial,” opponent Angela Bello said. “They get subpoenas almost a year away. Oftentimes they remember to show up but they don’t check the status of the case. So what happens, you have officers showing up for court, the case has long been dismissed and taxpayers are paying $200 in overtime in these payments for these police officers.”

“That’s completely incorrect,” Kunzi said. “What happens is we call every officer. If the case gets settled every officer is called and told.”

“I’ve been called a liar again,” Bello said. “I can tell you I have in fact talked to numerous officers who’ve told me that and either they’re lying or I’m lying and I can tell you it’s not me. I’m telling you as God is my witness they have told me there are no pre-trial conferences.”

“If it’s a major case we have a parade of deputies in my office every single day working and prepping for hearings and trials,” said Kunzi, who is finishing his first term.

When asked about her recent move to Pahrump a month ago, Bello said there have been many Nye County district attorneys over the years who weren’t from Pahrump. She mentioned having been in Las Vegas for over 40 years.

Kunzi was asked why he lost re-election as Mineral County district attorney. Kunzi said he was asked by Mineral County Commissioners to work out a settlement with the U.S. Army over possessory use tax.

“The problem was the state came in and told us the tax had to be raised from about $250,000 to $1.5 million,” Kunzi said. “The settlement we did end up getting the county about $600,000 per year. The problem was the assessor had a lot of problems with it and she made a lot of issues with it. That’s part of the politics but it’s been very good for me, it enabled me to work for the attorney general’s office for 12 years and quite frankly that was 16 years ago and I was elected four years ago with that same issue.”

Kunzi said he favors a grand jury but not as it’s suggested.

“A lot of these groups that are screaming for a grand jury is so someone can go out and subpoena an individual’s bank records, they have no evidence they committed a crime and they basically say, ‘look who he’s paying and you’ll find the corruption.’ That is not the America I believe in,” Kunzi said.

Bello said what a grand jury can do is determined by statute, the district attorney can’t call for a grand jury. It’s up to the district court or the taxpayers’ petition. County Commissioner Dan Schinhofen said he wished one of his opponents, Rick Osborne, had implemented his proposal for performance-based budgeting when he was county manager. Osborne said it identifies programs that can be cut in line-item budgets.

“It would’ve cost at least $40,000 to have someone come in and show us how to do that,” Schinhofen said. “I can show you what I’ve done for the last four years, he’s telling you what he might do.”

The incumbent pointed to cutting $5 million and laying off 61 employees over his four-year term to stay within the budget.

County Commission candidate Bob Howard charged the commission has squandered Payment Equal to Taxes built up from the U.S. Department of Energy for the Yucca Mountain project. He suggested donating 40 acres of a 170-acre Park-and-Ride he’d like to see at the Clark County line for a veterans’ cemetery.

“It would make the children more aware of what the election process is and why they need to be involved,” Winn said.

Merlino said she went to Pahrump Valley High School and talked to an anxious group of students but only two showed up.

“I will not be touching any ballots, any tally, anything else. However I will be standing there on election night to make sure everything is OK,” Merlino said.

“I would invite everyone to come watch. I invite you to come watch our testing, our programming, you can watch our absentee count, you can watch anything you want to. On election night I set up about 15, 20 chairs, I have about four or five tables and I have four people show up. You’re welcome to come watch anything you want. You can even observe at the polling place, all you have to do is let me know you’re going to be there, I will set you up in a chair, you can sign up and we will give you a little tag you’re an observer. You can’t disrupt any election process,” Merlino said.

“You can go watch some of it, you’re not going to see anything here because the actual counting of the absentee ballots and things like that always happens in Tonopah. So why not take a three-hour trip up there?” Winn replied sarcastically.

Merlino said her clerks in Pahrump are preoccupied with courts 95 percent of the time. Her staff in Tonopah has more time to do other things, like voter registration and county commission minutes.

“Right now it’s the best place for those workers in Tonopah to handle the election and the absentee ballot, not only that we have a lot of mail-in precincts. They’re in the northern part of the county so I think they have the right to come into Tonopah to watch that process,” Merlino said.

In closing, Merlino, the only countywide official from Tonopah reached out to the Pahrump crowd.

District Judge Robert Lane replied to comments during the campaign by his opponent, attorney Lillian “Lil” Donohue, about a court case against people who owned horses in the Calvada subdivision.

When asked what they would do for the security of the courtroom, Lane said he has asked commissioners to approve metal detectors without luck during his 14 years on the bench.