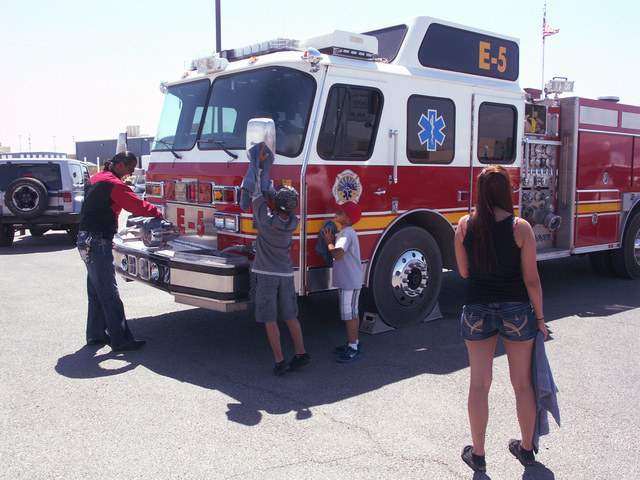 For parents who need a safe and fun venue for their kids during the summer, help is on the way.

The Pahrump Valley Youth Activities (PVYA) program is gearing up for another run.

With summer vacation several weeks away, many parents of elementary and early middle school aged kids have few options about how the youngsters spend their time.

Signups will take place at the Saddle West resort on May 22, from 6-to-9 p.m.

The program can accommodate more than 100 kids.

The organization joined KNYE radio’s Karen Jackson for a recent car wash fundraiser for the program, which raised more than $2,500.

Pahrump resident Rodney Camacho was one of a handful of volunteers who participated in the fundraiser last Saturday.

The married father of two boys has been involved in past PVYA events.

While taking a break from wiping down cars and trucks, Camacho gave his assessment of the program.

“It’s similar to how a Boys and Girls Club is run. We take care of kindergartners all the way up to 14- and 15-year-olds. Each day they get a breakfast and lunch as well as a snack during the day,” he said.

Though much of the activities are fun and games, Camacho said there are ample opportunities for kids to educate themselves at the same time.

“There are both indoors and outdoors. Outdoors can be any type of sports while indoors it’s mostly educational. There are movies, games and arts and crafts. It changes every day, so you never know what’s going to come up,” he said.

For just a few years, the Pahrump Boys and Girls Club appeared to be the perfect solution for parents, but the organization was forced to close in 2010 due to the economic downturn and a lack of proper funding.

As a result, PVYA president Tom Metscher said parents need to act quickly to get their child signed up for the program — either in person or online.

He said the fee covers all of the amenities the program provides for the full nine-week duration.

One caveat Metscher noted was the program accepts cash only.

“It’s $100 per child and we certainly advise them to download the document online so that it’s pre-filled and they can bring that with them. We are going to sign up 150 people. Saddle West is opening up their bingo showroom so we should get everybody registered quickly. There are limited spots just like in the past,” he said.

Local business owner Tom Saitta held the fundraiser at his car dealership a week ago Friday and Saturday.

“The car wash was phenomenal. Karen Jackson and our mutual friend Lorraine Harper went into work Saturday and normally they don’t work Saturdays. They were live on the radio for four hours touting this wonderful program. After the show, they both came down and had their cars washed, and I couldn’t believe the generous donations they both made. They are dear friends of mine,” he said.

Jackson arranged to have one of the town’s fire trucks pull up to be washed, much to the surprise of the volunteers who looked both stunned and amused when the gigantic red vehicle arrived.

“I knew Tom Saitta was out there drying the vehicles, so I called Fire Chief Scott Lewis to see if he could send in a fire truck. He told me that he had Engine 5 returning from a call and it could use a thorough cleaning. I told him I knew where it could get washed,” Jackson said with a laugh.

More than 100 cars were washed during the two-day event.

The PVYA program is entering its fourth year.