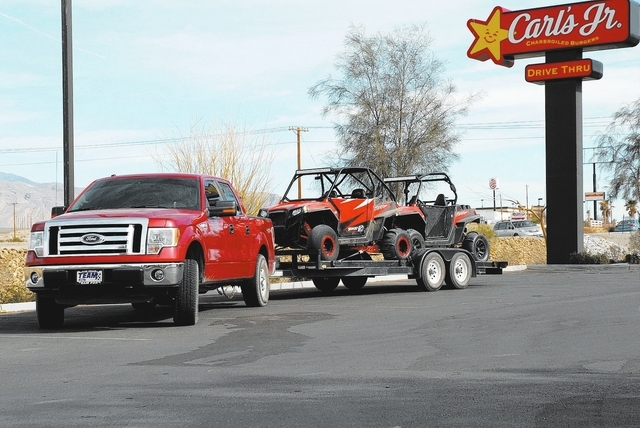 Local motorists can count on seeing at least one or two of them during their daily commute in town.

Quads, ATVs or simply Off-Highway Vehicles (OHV) are a common sight along roadways in the Pahrump Valley and town officials would like to see the owners comply with local laws and ordinances while at the same time grant riders a little more leeway in getting to their respective destinations.

Previously, many local residents use what’s known as “Toy Haulers” to transport their OHVs to their desired riding destination.

This month, the Pahrump Town Board approved a letter of support for owners to actually ride their OHVs on Nye County roadways in order to get to their favorite spots.

The letter will be forwarded to county officials for their approval.

“The state sent out a law that says they can be used on regular roads. We just have to identify what roads and where. The Tonopah Town Board did that at their last meeting and we adopted it from them so we want to see what they put together,” he said.

The NRS refers to off-highway vehicles with a displacement of 70 cubic centimeters and above.

Riders may not use their OHVs to run errands around town.

Schinhofen said that owners will have to adhere to specific regulations as they pertain to the NRS.

“They can pretty much share the roadway but they have to be licensed and have certain safety equipment like lights. As it is now, they drive on the side of the road, kicking up dust. Now they will be in the road. I don’t necessarily see this as a bad thing. It’s a bit more regulation, but people don’t seem to mind that because of the safety aspect,” he said.

Pahrump Town Board member Robert Adams authored the item during a recent town board meeting.

Adams said riders who wish to comply with the law must first have their vehicle inspected.

He also said local residents shouldn’t expect to see quads tooling up and down State Route 160 anytime soon as the NRS prohibits OHVs along interstate highways.

Riders, however, can cross interstate highways to reach their destination.

“A person driving an off-highway vehicle on a highway may only travel to or from the private or public area. If you try to go down 160 on an OHV right now, you can surely expect to get a ticket. Even with the new law you can still get a ticket. One of the reasons I moved to Pahrump was so I could ride my OHV from my house,” Adams said.

The town board member also said once everything is finalized, signage will be installed along various roadways informing riders of the NRS.

“We did figure out how many signs we need and it comes to about $1,200 and there’s going to be a grant application process. When it comes to running the town, it’s not going to be a lot of money. With Pahrump there’s just so many streets that parallel 372 and 160, there’s no reason to put OHV signs along those roadways. You can get anywhere you need to go without getting on those two state highways,” he said.

While filling his fuel tank at a local convenience store, a traveler from Barstow, Calif., gave his thoughts on the NRS.

Sidney Woods said the law doesn’t really apply to him because he routinely hauls his OHVs to his desired spot, Dumont Dunes.

“It sounds to me like it’s more for the people who live here or just park their RVs at their park and go for a ride. I don’t own an RV so my toys are with me all of the time. I think it does make sense because not everyone has a fifth wheel to use and it’s so much easier to just ride from your home to the trails,” he said.

Adams also noted that some local residents have the erroneous impression that certain laws that apply to cars, trucks and motorcycles won’t apply to OHVers.

“I’ve had some people come to me and say they will drive their OHV because they can’t get a DUI. They have some crazy myth that if you are on an OHV, you don’t have to follow traffic laws but you certainly do have to follow them. A helmet is also required. The law also provides for licensed minors to be under direct supervision of an adult when riding,” he said.

Schinhofen, meanwhile, said the Regional Transportation Commission (RTC) will also be involved in the process.

“The RTC is the one who is supposed to decide what roads will be designated,” he said.

According to the town’s backup materials, there are potential benefits to the action, especially among rural communities.

Marysvale, a rural community in central Utah, is in the center of the Paiute Trail System for OHVs.

Before the Paiute Trail, the community had just seven business licenses in 1980. After opening the trail, there are now 21 businesses licenses, one being an 80-space RV Park with 90 percent occupancy spring through fall.

In a statewide example, a study by Arizona State University in 2002, showed a direct impact to the state’s economy of roughly $3 billion due to the OHV law.

The study also revealed that more than 36,900 jobs were created resulting in $1.1 billion of household income and $187 million in state tax revenues.

The Pahrump Tourism Advisory Board is just about ready to launch the OHV pages of Pahrump’s Base Camp to Adventure.

The maps have been approved by the BLM and the USFS.

With Pahrump extending its support, town officials believe marked OHV-friendly routes along the roadways will benefit both visitors and business owners in the community.