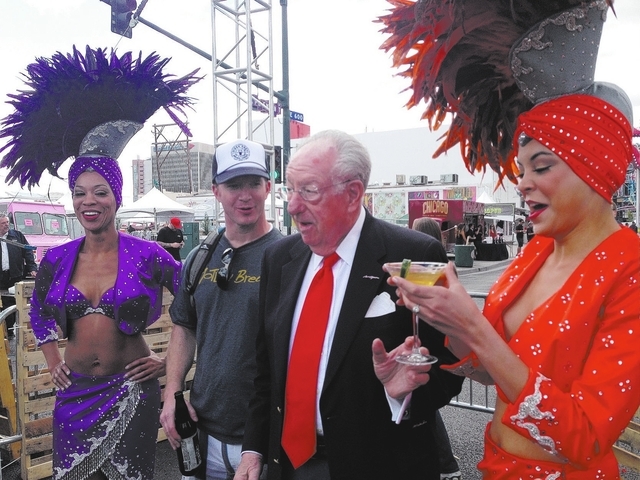 The tale of the Chicken Ranch and its associated drama has been told in the 1985 best- selling book “The Nye County Brothel Wars” by Jane Kasindorf. Here I will briefly discuss some highlights not in last week’s column.

The Chicken Ranch opened at 4 p.m. on Oct. 12, 1976. Sheriff J. Howard was one of the first visitors and promptly closed the place for violating a Pahrump ordinance forbidding brothels within the town limits. The owner, Walter Plankinton, was summoned by Nye County District Attorney Peter Knight, resulting in a $500 fine and 60 days in jail. Plankinton appealed on grounds the town charter had not been properly drawn.

In March 1977, Plankinton reopened the Chicken Ranch six miles to the south, beyond the town limits of Pahrump. He launched a $60,000 ad campaign to attract Las Vegas tourists. Opinion in Pahrump was divided regarding the presence of the new brothel.

Nye County District Attorney Knight then tried to close Plankinton down at his new location on nuisance charges and when that failed he tried to get him for advertising in a county where prostitution was illegal—namely Clark County. But Plankinton fought those charges in court and the brothel remained open.

On the night of June 10, 1978, the Chicken Ranch burned. When the housekeeper opened the door to what she thought was a prospective customer, she found a man with his face hidden by two wide strips of black tape. She started to scream and he punched her in the face. He then threw a fire bomb into the parlor.

Fourteen people ran for their lives, some narrowly escaping death. Yet no more than a few days went by when Plankinton was back in business with two mobile homes and two more on the way. Meanwhile Plankinton had accused the “Tonopah Mafia,” of trying to drive him out of business because, unlike other brothel owners in the county, he refused to “knuckle under.”

Elbert Lee Easley, described as an “accused arsonist, and assassin” in a Hustler magazine article, was arrested in California on charges of the double ice pick murder of a Modesto couple. According to Hustler, a search of Easley’s California residence turned up evidence suggesting he had been hired by Bill Martin, owner of the Shamrock Brothel in Lathrop Wells, to burn down the Chicken Ranch.

In addition to a telegram from Martin to Easley, there was testimony of Easley’s girlfriend to support the theory. Former Nye County Sheriff’s Lt. Glen Henderson was also involved in the Chicken Ranch fire, according to this version of the story.

Walter Plankinton was born in 1928 in the Bible Belt in Kansas and apparently had a conservative upbringing. His mother believed that going to a dance or a movie was a sin. During the Depression his family moved to Colorado, where he married his local sweetheart. He tried farming for a year, and made only $166. He got involved in various businesses and in 1976, after semi-retiring, he moved to Nevada.

Plankinton had run for governor of Colorado in 1970 and, after arriving in Nevada, for Nye County Commissioner “to give me something to do,” he was quoted as saying. He was, of course, defeated both times. It was while he ran for commissioner that he became interested in opening a brothel.

Glen Henderson was a resident of the Lathrop Wells area, now known as Amargosa Valley, at the time of the Chicken Ranch fire.

He was indicted in December of 1979 for conspiracy and perjury in connection with the June 1978 arson of Walter Plankinton’s Chicken Ranch brothel. He was described as a big man, 6-foot, 5-inches, who lived in humble circumstances 10 miles from Highway 95 in the Amargosa Valley.

He’d served in the army in World War II and had been a Maine Forest Ranger. He arrived in Las Vegas in 1952 from Los Angeles and worked on Fremont Street as a bartender and cook. After four years of bartending, he moved to Beatty where he was named a special deputy, serving until 1960.

Following that he was assistant security chief at the Nevada Test Site, moving to Lathrop Wells in the spring of 1976. He was named a sergeant in the Nye County Sheriff’s Office by Sheriff Don Tomany in spring 1976.

William Apfel, also known as Bill Martin, owner of the Shamrock Brothel in Lathrop Wells, and two employees were indicted in connection with the Chicken Ranch fire. Reliable sources reported Martin was associated with the Mafia and had been sent to Nevada to, in effect, cool off.

On April 29, 1982, Martin was free on appeal of his conviction when he was allegedly shot at close range in the eye and killed upon answering the door to his home near the Shamrock brothel in Lathrop Wells.

He was preparing to have dinner with his girlfriend, Beverly Nickel, a manager of Martin’s Coach House Bar, also located near the Shamrock brothel.

Martin was shot and killed by Gerald Joseph Aesoph. Nickel was forced to accompany Aesoph when he fled the murder scene by automobile. The California Highway Patrol and Inyo County Police arrested him after a four-hour standoff near Shoshone, Calif.

A preliminary hearing was held in Beatty Justice Court with Judge Bill Sullivan presiding. It was determined that there was sufficient evidence for the defendant to stand trial.

Aesoph’s lawyer was Las Vegas attorney Oscar Goodman, who later became mayor of Las Vegas. Aesoph was arraigned before District Court Judge William P. Beko in Tonopah on July 28, 1982, and was freed on a $500,000 bond. In addition to murder, Aesoph was charged with kidnapping, robbery, and burglary.

Aesoph disappeared before the case went to a jury.