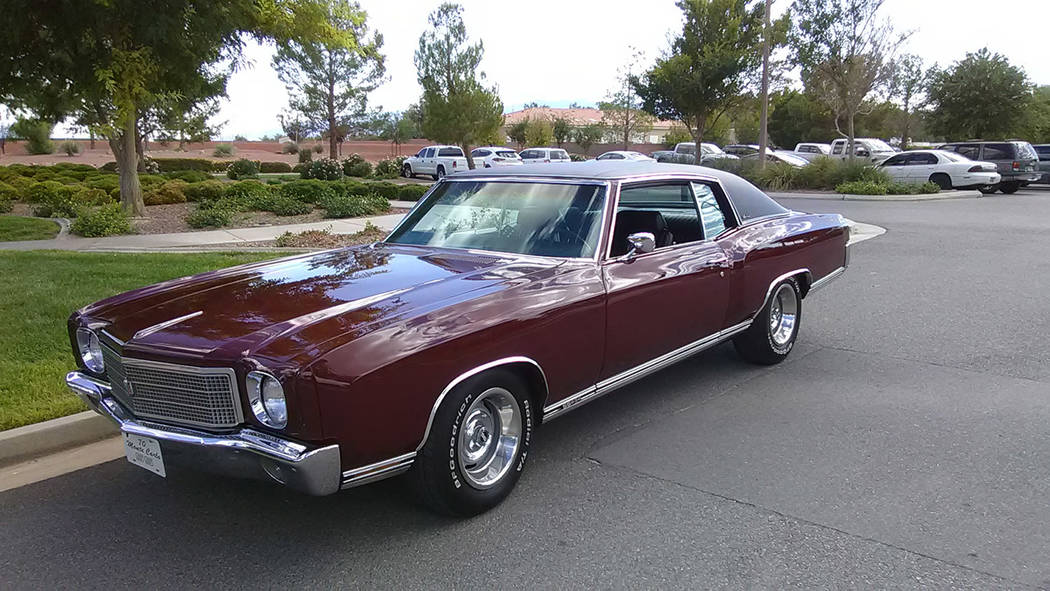 Selwyn Harris/Pahrump Valley Times This 1970 Chevy Monte Carlo SS, with a 454 engine is owned by Fire Chief Scott Lewis, who was at the car show for roughly 10 minutes before he had to leave on Saturday. 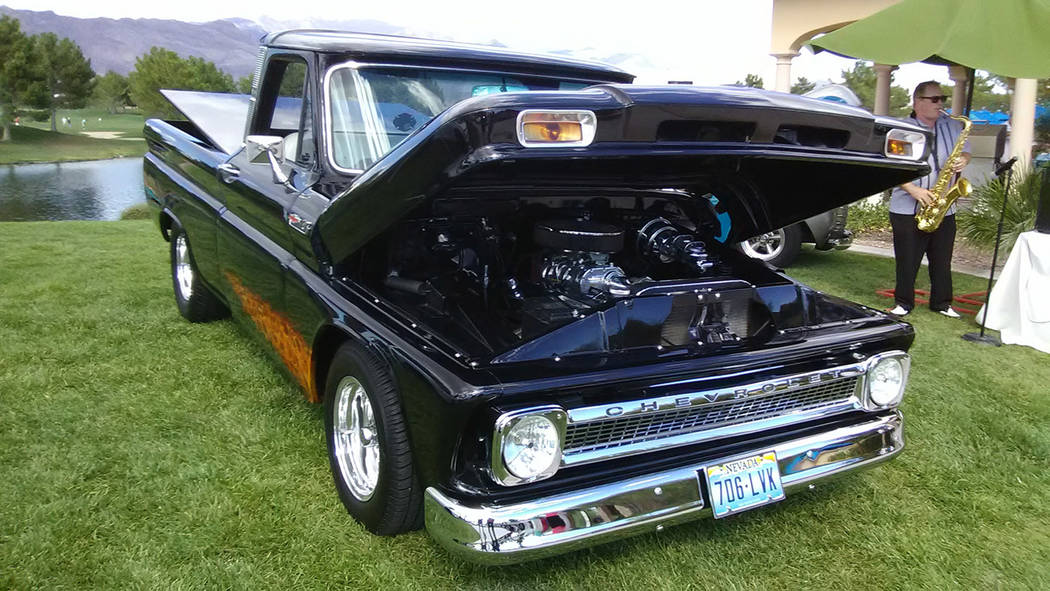 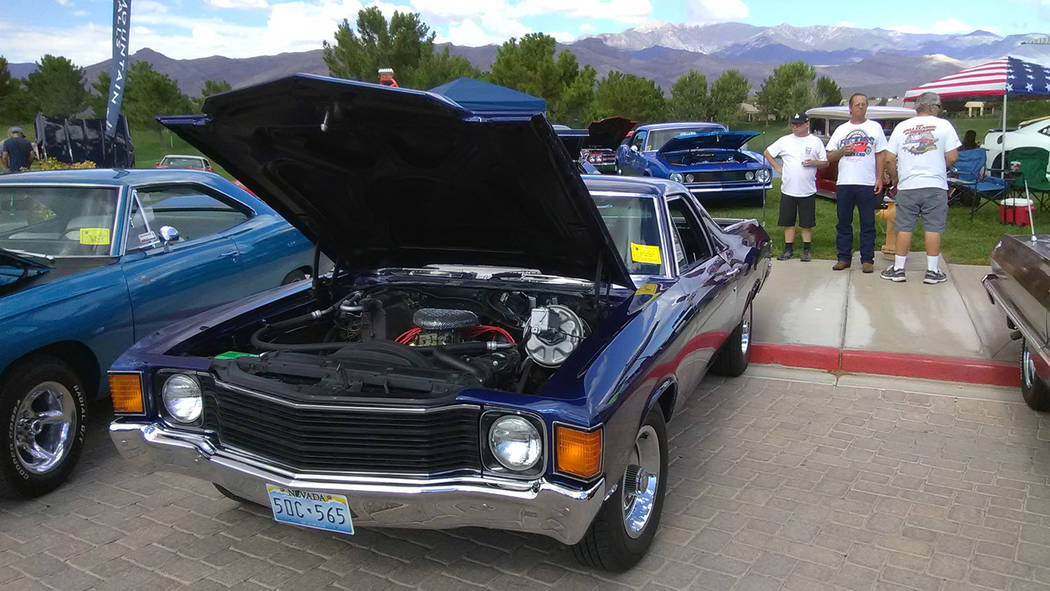 Selwyn Harris/Pahrump Valley Times 25-year Pahrump resident Don Hartwick attended the show with his wife Diane Maxey. Both showed off a fully restored 1972 Ford El Camino. Saturday was the first time both attended a car show as a participant. 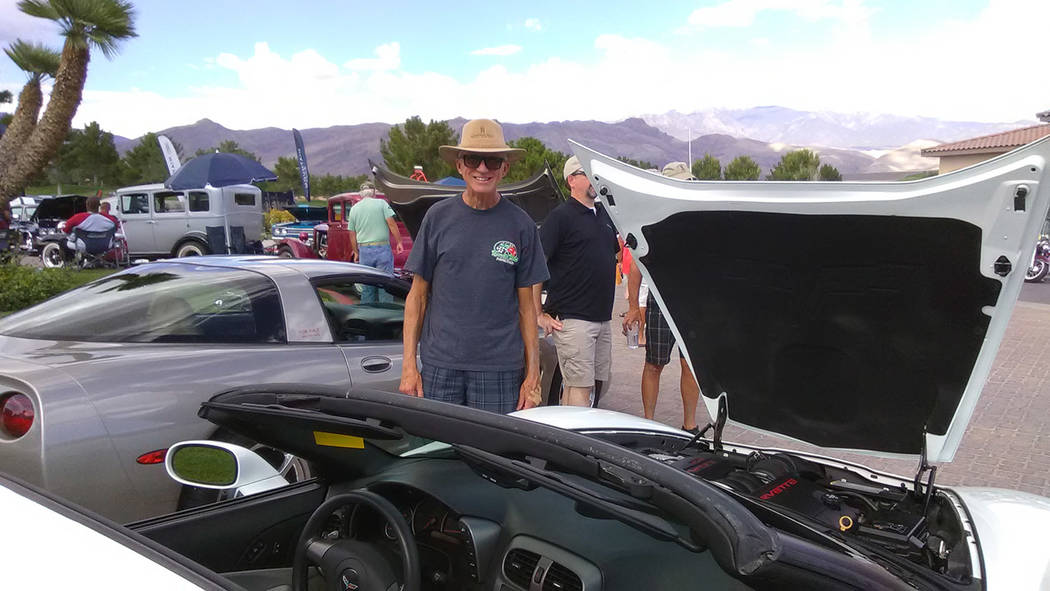 Selwyn Harris/Pahrump Valley Times Pahrump resident Robert Schoenhofen was showing off his 2007 Chevy Corvette. He called the car 'bulletproof,' due to it's tenacious engine and solid handling. 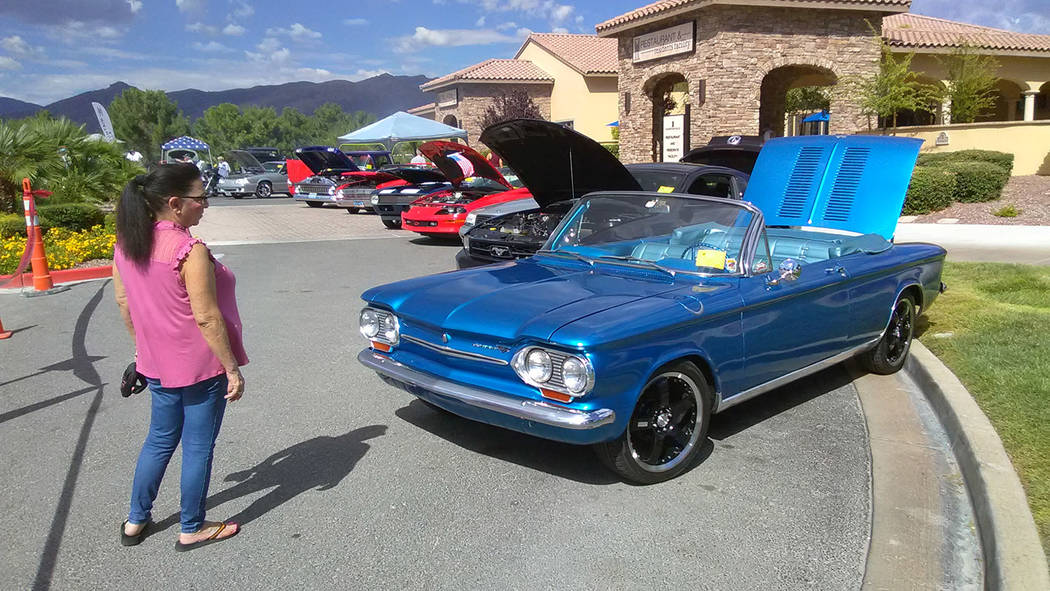 Selwyn Harris/Pahrump Valley There was no shortage of cars and car enthusiasts during Saturday's Hot August Auto Show at Mountain Falls. Several dozen classic American and import cars were on display throughout the afternoon. 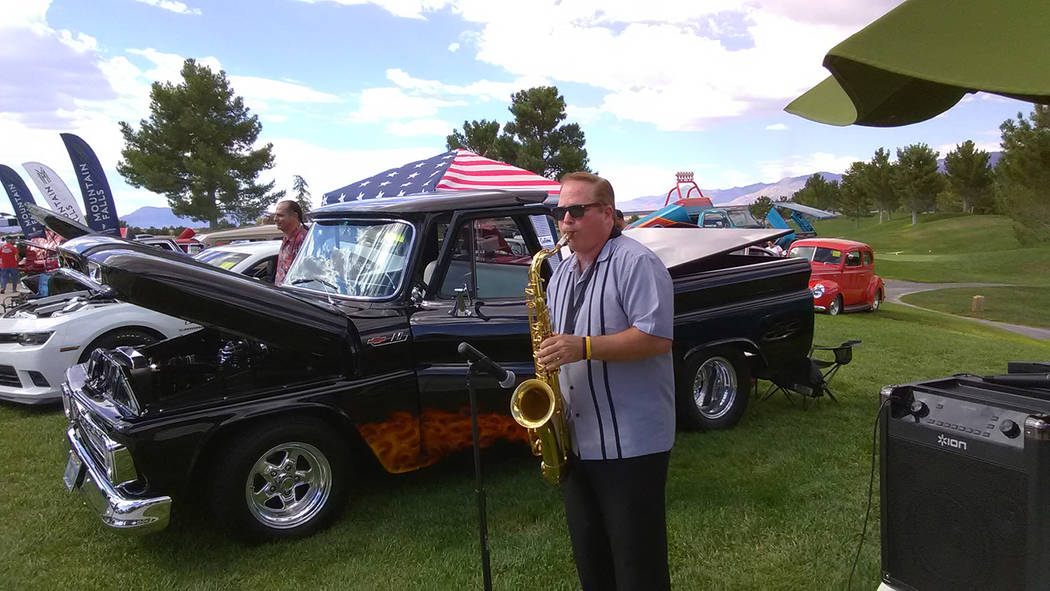 Selwyn Harris/Pahrump Valley Times Live entertainment was provided throughout the afternoon by saxophonist “Downtown” Michael Brown, of Sha Na Na fame. Participants were treated to a free barbeque lunch and a round of golf for two.

Mountain Falls was the venue for any and all classic or late model car enthusiasts, as the Hot August Auto Show arrived in town.

Automobile aficionados from Southern Nevada spent the afternoon gazing, gawking and admiring numerous makes and models of American cars and imports, sports cars, pickups and even a few motorcycles at the Aug. 26 event.

Participants also received a free barbeque lunch and a round of golf.

One person who made a visit to the show was none other than Pahrump Valley Fire and Rescue Services Chief Scott Lewis.

Though Lewis was not an official participant in the show, he brought out his newly acquired 1970 Chevy Monte Carlo SS.

“It’s an all original car, with all matching numbers,” he said. “I’ve been looking for one for quite a long time.”

Unfortunately for Lewis, he was not able to spend much time at the show.

“I was probably there for less than 10 minutes before I had to leave,” he said. “It was a lot of fun getting it out and enjoying the car community here in town. The Monte Carlo SS, has a 454 engine. It’s the biggest one that they made.”

“This is actually my fourth Monte Carlo,” he said. “It was like my original one, with the same color, same setup, and everything. I’ll try to visit other future car shows, provided I have the personal time to do so.”

Drove over the hump

Clairborne drove in from North Las Vegas on Saturday.

“This is my first time participating here,” he said. “I heard about it through the Las Vegas Cruisin Association. I have a 1964 Chevy pickup and it’s been driven everywhere. I just love going to car shows. I’ve been doing it my whole life. It actually took six trucks to build this one. The motor is a 355 supercharger. The front end is from a late model ‘72 Chevy pickup.”

Unbelievably, Clairborne also said he prefers to drive with his windows down, even during the summer months in Southern Nevada.

“I don’t have air conditioning in this truck,” he said. “I’ve had other classic cars with air conditioning and I just never used it. I just like to roll the windows down and cruise. I have owned this Chevy for 10 years.”

Saturday was the first time both attended a car show as a participant.

Both showed off a fully restored 1972 Chevrolet El Camino.

“We finally got it restored on Friday,” he said. “The car show popped up, so we decided to come out. We also come to Mountain Falls to have lunch once in awhile. Honestly, I never imagined it would be this big of a turnout.”

Maxey, meanwhile said she has wanted to own a Chevrolet El Camino.

“I have wanted an El Camino since I was in junior high school, so this is like a dream come true,” she said. “My husband and I picked the color out, which is a pearl midnight blue. When we first got it, the condition was horrible. It looked like a bumblebee going down the street because it was black and yellow. It also had rust. Everything we did to restore it was brand new. The rims are gorgeous. It has Chevy Chevelle rims. This is my first time and I’m certainly going to do it again, it’s been a lot of fun.”

Also attending the show was Pahrump resident Robert Schoenhofen, who was showing off his 2007 Chevy Corvette.

“It’s a stock Corvette, so it came as I ordered it from the dealer,” he said. “It has 105,000 miles and it’s bulletproof. It’s just been a great car. I wasn’t always a sports car enthusiast, but my brother was, and as I got older, I thought I’d like to pick one up. He had Corvettes all through the ‘60s. This is a wonderful event and we had great turnout.”