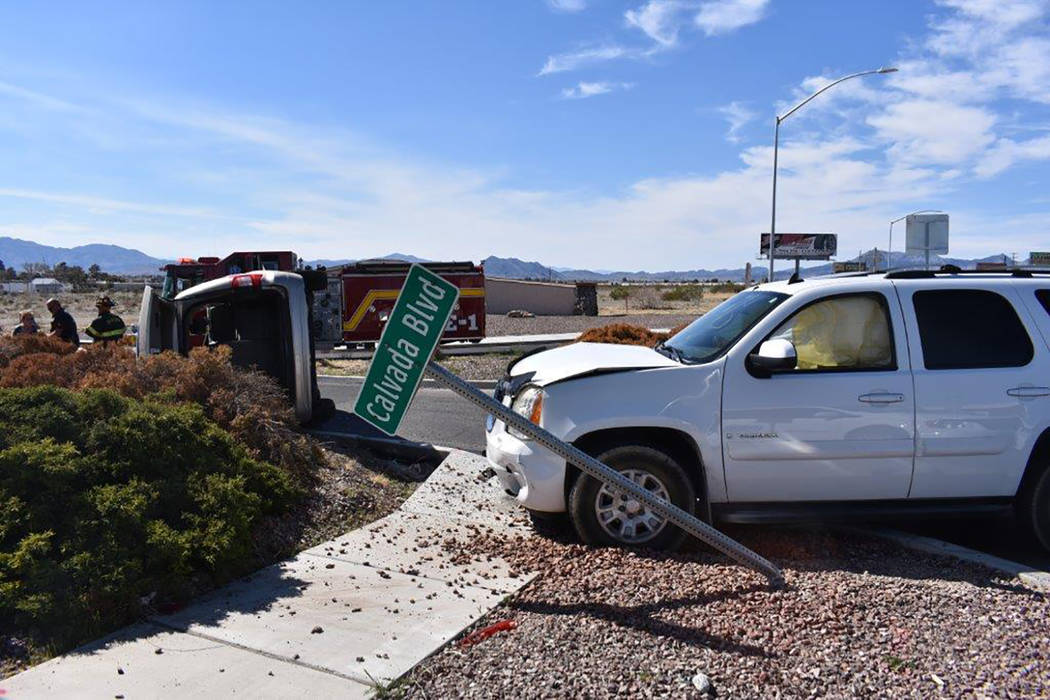 Special to the Pahrump Valley Times Two people were transported to Desert View Hospital after two-vehicle crash along Highway 160 at Calvada Boulevard last Friday. Pahrump Valley Fire and Rescue Services Chief Scott Lewis said crews two individuals were entrapped inside an overturned vehicle, prior to the arrival of rescue crews just after 3 p.m. 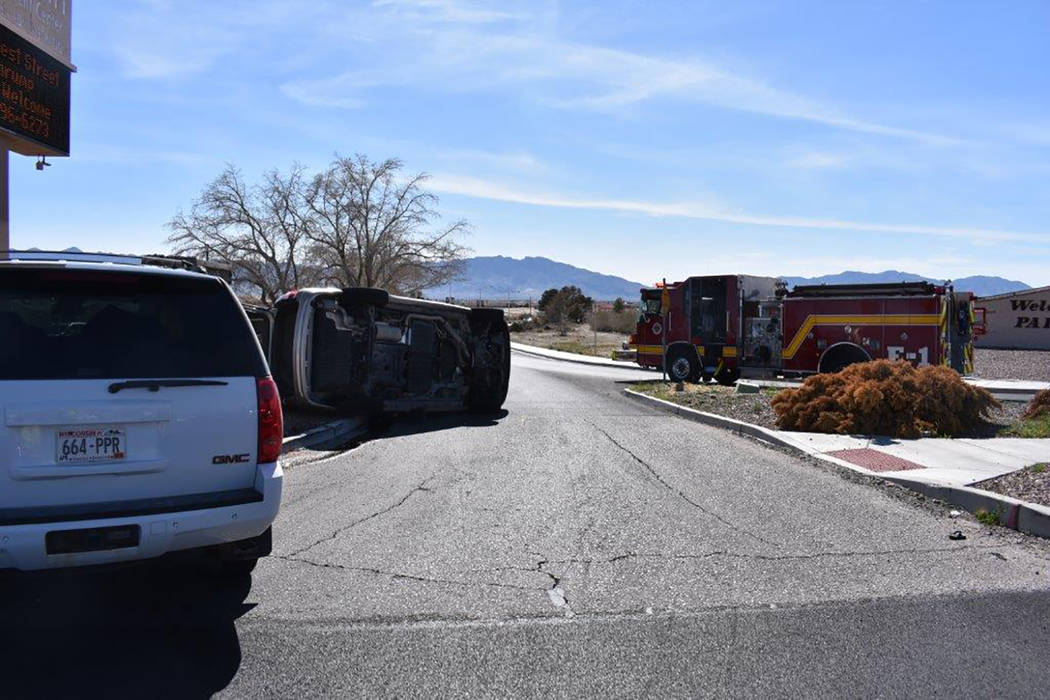 Special to the Pahrump Valley Times The intersection of Calvada Boulevard and Highway 160 was entirely blocked off while crews worked the scene of a two-vehicle crash last Friday afternoon. Two people who sustained injuries in the collision and transported to Desert View Hospital are expected to recover. 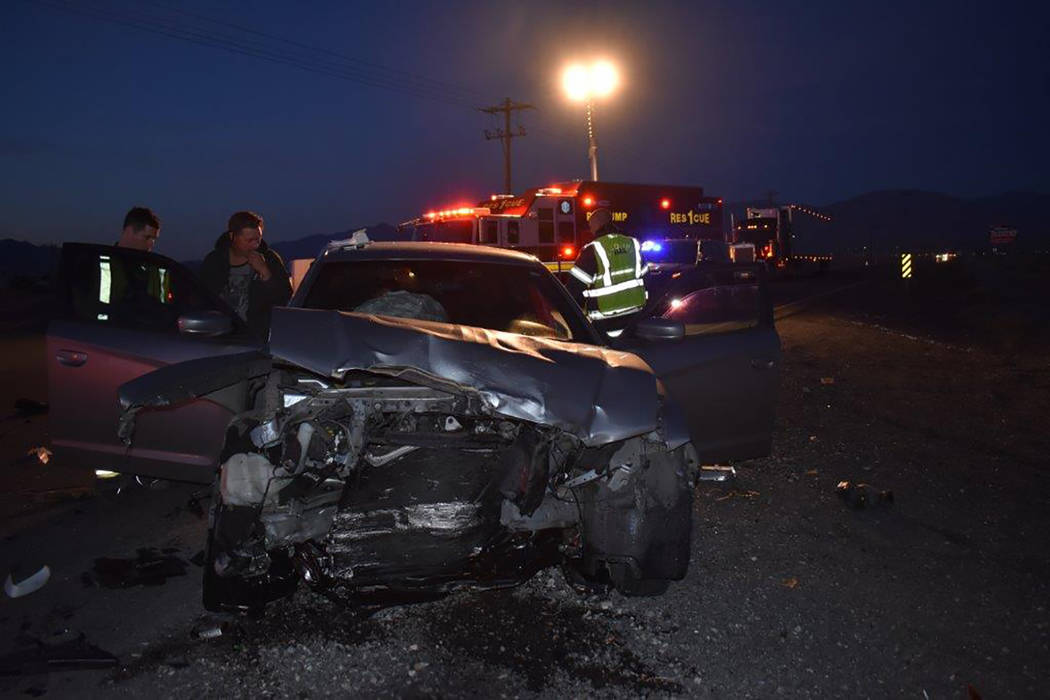 Special to the Pahrump Valley Times One person was taken into custody on a DUI charge, while another was transported to Desert View Hospital, after a two car collision at the intersection of Barney Street and Highway 372 on Sunday evening, just before 7 p.m. A total of four people were medically assessed on scene.

“Upon arrival, crews found a two-vehicle accident as reported, with significant damage to both vehicles, with one vehicle resting on its side and two people entrapped,” Lewis said. “The assignment was upgraded to a rescue, bringing additional medic units as well as the chief. Crews extricated the two patients without incident and both were transported to the local hospital.”

The following day, fire crews were summoned to Highway 160 and Bell Vista Avenue for another two-car crash just before 11 a.m.

Lewis said a total of five tourists en route to Death Valley were assessed for injuries.

At least two individuals complaining of abdominal pain were transported by ground to Desert View Hospital.

“The scene size-up revealed no entrapment, however, there were at least six persons from both vehicles who were medically evaluated,” Lewis noted. “That situation warranted a response from additional medics and an engine company to the assignment. One person met flight criteria due to injuries sustained following the impact. A landing zone for Mercy Air 24 crews was established on the highway, where patient care was transferred and that patient was flown to UMC Trauma in Las Vegas.”

One person was transported to Desert View Hospital, while another was taken into custody by NHP after a two-car collision at the intersection of Barney Street and Highway 372 on Sunday evening.

Lewis said crews responded to the scene just before 7 p.m.

“Upon arrival, we found a two-vehicle accident with significant damage to each of the vehicles,” he said. “There was also a substantial separation distance between the final resting positions of the vehicles, which is usually an indicator of a high-speed impact.

“The scene size-up and risk assessment found no additional scene hazards, or entrapment, however, there was one patient who displayed signs of trauma and that patient was transported to the local hospital. There were a total of four people assessed on-scene. Our heavy rescue apparatus remained on location to further assist Nevada Highway Patrol Troopers.”

Emergency crews responded to an early morning structure fire on the 3600 block of East Chablis Street on Sunday, April 1.

“The specific report was that of a kitchen fire,” Lewis said. “Upon arrival, crews found a mostly extinguished kitchen fire, however crews finished extinguishing the fire and ventilated the residence without incident. There were no injuries reported.”

Fire crews were summoned to the 9600 block of South Oakridge Avenue on April 2, following an unknown type of fire at midnight.

“Upon arrival, crews found a well-involved engine compartment fire on a commercial truck,” Lewis said. “That fire was quickly controlled and extinguished and there were no injuries reported. The investigation revealed the fire started as a result of mechanical failure of a charging system.”