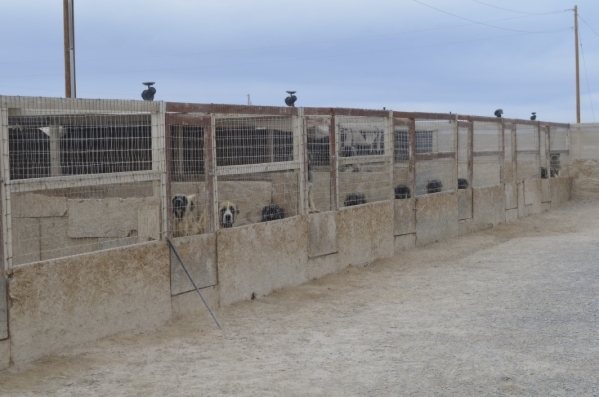 A Pahrump kennel owner has six months to find homes for 100 dogs that he has amassed on his property for the last several years.

The owner of Est-Alfa K-9 Security Service, Vasili Platunov, was given the extension to find homes for the dogs at the Nye County Commission meeting on Jan. 19.

Platunov had filed an appeal to the board after the Pahrump Regional Planning Commission’s denial of the conditional use permit, which would have allowed him to house 150 dogs on 2.3 acres located at 2790 E. Camellia St. in Pahrump. The county upheld the planners’ decision.

In November, the Pahrump Regional Planning Commission denied Platunov’s request after commission members heard testimonies from neighbors and looked at the kennel’s record.

Platunov currently has over 130 dogs on his property. He had violated his previous approval which allowed him to have 30 dogs, according to the report by the Nye County Department of Planning.

Platunov has dozens of kennels with Caucasian Ovcharkas, Turkish Kangal, Armenian Gampr and Georgian Nagazi that had been left there due to their age, behavioral issues or other reasons by their owners.

According to records, Nye County Animal Control hasn’t received any complaints about the property in a few years and Platunov has been in compliance with the inspections and other requirements.

However, many neighbors previously complained about noise and odor from the kennel. Prior to the decision by the RPC, the Nye County Planning Department received many letters from nearby residents who expressed their worries about a potential expansion of the kennel.

Paula Glidden, who lives on the southern end of the town, is among a group of local residents who opposed an application for a conditional use permit. At the commissioners’ meeting, Glidden once again aired her concerns about the number of dogs at the kennel.

“There’s regulations and there’s rules that we all get to live by. I believe he has broken them twice and I think he has gone way past what can be called excessive,” she said.

The decision by the county commission is final.