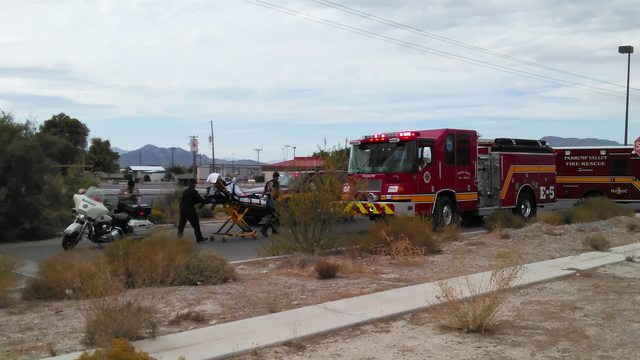 One person was transported to Desert View Hospital following a two-vehicle rear-end collision along Frontage Road just after 3 p.m. on Monday. One person was cited in the low-speed collision involving a Mercedes Benz and late-model pickup truck. Selwyn Harris/Pahrump Valley Times 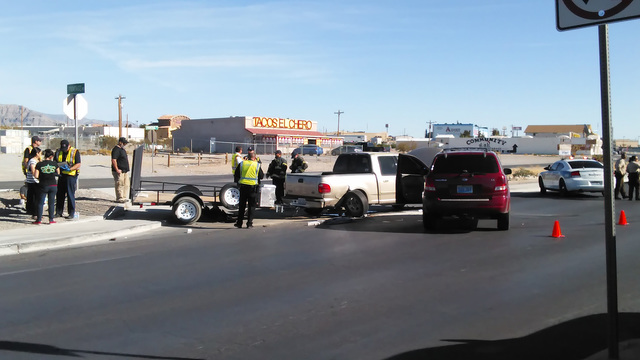 No serious injuries were reported following a two-vehicle collision on Highway 160 on Thursday near Panda Express. The crash caused major damage to both vehicles. NHP said the driver of the Ford pickup truck will be cited for failure to yield. Selwyn Harris/Pahrump Valley Times

On Monday, Oct. 10, a motorcyclist was flown to UMC Trauma after hitting a burro along a dark stretch of north Highway 160 just after 7 p.m.

“The address was amended to be north of Simkins Street and we found the accident in the area of Harris Farm Road,” he said. “It was a motorcycle versus a burro in the roadway. There were significant injuries to both the burro and the motorcycle rider. The rider’s injuries met the criteria for flight and Mercy Air-21 was brought to the scene. Patient care was then transferred to Mercy Air, who flew that patient to UMC Trauma in Las Vegas. Nye County Animal Control and the sheriff’s office had to euthanize the animal on scene.”

Also on Monday, one person was transported to Desert View Hospital following a two-vehicle rear-end collision along Frontage Road just after 3 p.m. One person was cited in the low-speed collision involving a Mercedes Benz and late model pickup truck.

On Sunday, fire crews were dispatched to the 1200 block of South Highway 160 for a two-vehicle collision just before 5 p.m, where one person was transported to Desert View Hospital.

On Saturday, fire crews were summoned to the area of south Warren Street for a report of a grass fire just before 1 a.m.

“Crews arrived and found a grass fire moving alongside the roadway,” Lewis said. “There were no immediate structure exposures and the fire was quickly controlled without incident. It is undetermined as far as the ignition source.”

“Upon arrival, crews found a refrigerator which apparently had been involved in an explosion,” Lewis said. “There was fire in the area of the appliance that was self-extinguished. There was also significant damage to adjacent rooms of the house. There were no injuries and that investigation is underway.”

“Upon arrival, crews found a large rubbish fire sandwiched between two structures,” Lewis said. “Residents and the fire department prevented the primary dwelling from catching on fire. One person sustained some minor burns and was evaluated on scene but refused further medical.”

A two-vehicle collision on Highway 160 last Thursday shut down all northbound traffic for up to an hour just after 3 p.m.

“We were dispatched to Highway 160 in front of Panda Express for a T-bone-type collision,” Lewis said. “Crews arrived and completed a scene size-up as well as risk assessment and found no additional scene hazards. However, there was a significant impact which caused major damage to both vehicles. All occupants displayed injuries consistent with airbag deployment, but none were transported from the scene.”

Three hours later Pahrump crews were summoned to a mutual aid assignment on Highway 160 at mile marker 30 in Clark County just after 6 p.m.