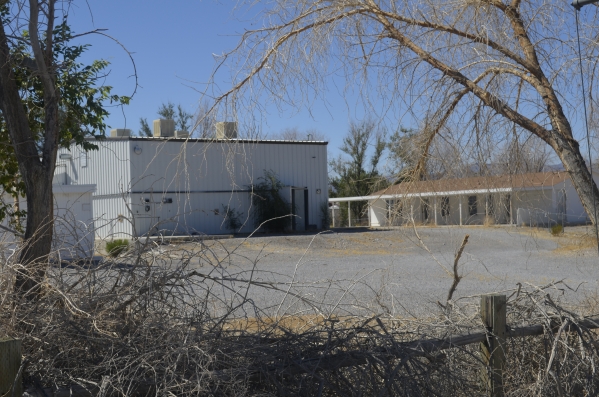 Despite numerous objections and concerns from local residents, Nye County commissioners granted a zone change and special use permit application under stringent conditions for another medical marijuana establishment in Pahrump on Tuesday.

The decision comes almost a month after the Pahrump Regional Planning Commission denied a zone change from the neighborhood commercial zoning district to the commercial manufacturing zoning district on 4.29 acres located at 6041 S. Hafen Ranch Road in Pahrump.

During the meeting, Pahrump resident Carroll MacDonald submitted a petition with more than 500 signatures asking to deny the zone change and special use permit for the facility that is situated near the Artesia and Cottonwoods neighborhoods and 1.1 miles from Hafen Elementary School.

“Please note that we aren’t against the business, however, we do believe it to be a bad location,” she said. “The location for this business is not appropriate for this residential area.”

Under requirements, there’s no separation for residences from growhouses. However, the minimum distance from a school is 1,000 feet and from community facilities such as playground, church, or park is 300 feet, all of which the facility meets.

Commissioner Dan Schinhofen noted that a new facility would boost the county economy.

“There’s 500 people, I represent almost 9,000 people,” he said. “It’s going to be at least 20 jobs, it’s a tax base, it’s a new industry. It’s requiring a lot of investment and it’s gotten us a lot of jobs in this community over the last year just in construction.”

Eisa Khoury, chief financial officer of the Denver-based marijuana dispensary MMJ America, addressed some of the concerns that were brought up by local residents.

“It’s obviously a very contentious issue, there are quite a few people that aren’t happy about this, but I think there’s some misinformation about this industry that a lot of people are just ignoring,” Khoury said. “First of all, we don’t grow in the ground, so that alleviates some of the issues…we don’t introduce chemicals in the soil, we don’t use chemicals, we use nutrients. And these nutrients are approved by the federal government and they are to be used for all vegetation to all fruits and vegetables that are being grown throughout this country.”

The facility would have a MicroCool fogging system that captures the odor and turns it into vapor and won’t contaminate nearby wells, Khoury said. In-usage sales won’t be conducted at the location, however the business is approved to sell to county and state dispensaries.

“The concerns that are there are very well understood, however, there are many, many items that can mitigate all your concerns,” he said. “You just have to have an open mind and allow people to explain how we do business, and hopefully, we ease the pain, and that these people understand what we aren’t doing. We are not here to hurt or harm anyone, we are going to employ people, it is going to produce taxes and so forth for the city.”

Applicant Scott Sibley said he had an approved special use permit for a facility on Homestead Road that had been purchased by another business. The property on South Hafen Ranch Road is currently owned by the Bank of America and is valued at $97,812 according to Nye County’s website.

While several nearby properties have been zoned neighborhood commercial, officials made a motion to change the property zoning to commercial manufacturing.

The conditions for a special use permit included usage of public utilities, seclusion with a wall around the property and education of residents on the matter. The business also can’t use a nearby well and septic tank.

The zone change of the 17,000-square-foot building and the outbuildings that formerly housed an assembly business was also urged by the real estate agent and the Bank of America, Commissioner Frank Carbone said.

“It’s been sitting there over a year with no activity,” he said. “And it probably would not be any activity because the building is too big for anybody.”

The business has to start operating by May 3, 2016 before its license expires.