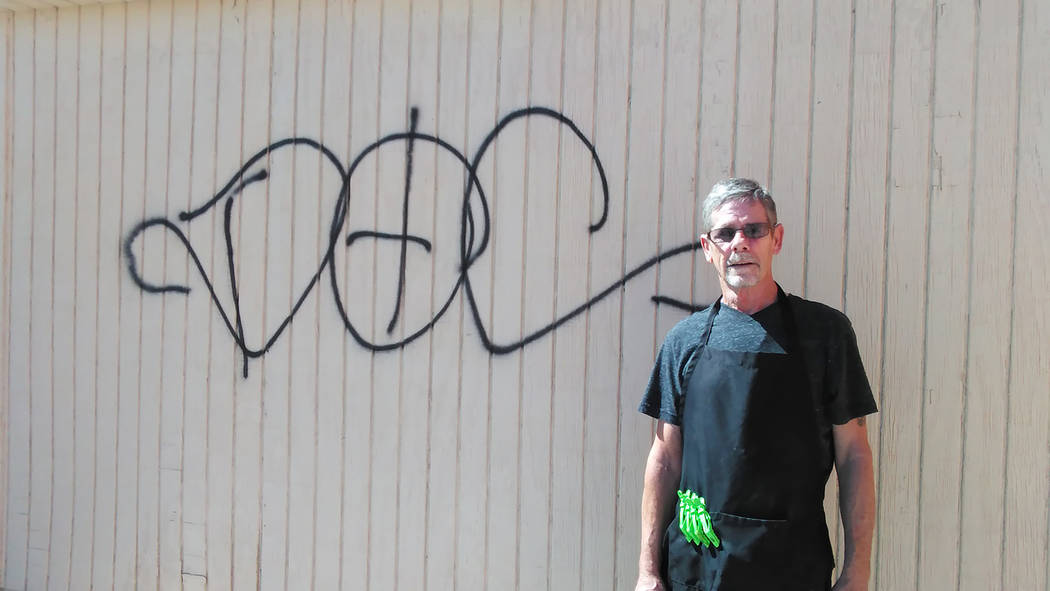 The owners of a local salon, day spa and boutique arrived at their business Wednesday morning and discovered the place had been vandalized.

The Nye County Sheriff’s Office is investigating the crime.

Co-owner Bob Paynter said Wednesday’s act was not the first time the business was targeted in recent months.

“Business is doing awesome, which is a good thing, but we keep getting vandalized,” he said. “They stole our patio set and then they broke into our shed and took a bunch of stuff out of there. About two weeks later, they took our plastic chairs and when I came in this morning, I saw the graffiti all over the building and the shed.”

Additionally, Paynter said it appears that only his business is the focus of the vandals.

“It’s just us that they are targeting,” he said. “I have no idea, but it seems like somebody’s got something out for us because they don’t ever bother the other businesses in this plaza. The other businesses also leave their chairs outside, but they’ve never been stolen. Enough is enough and whoever it is, they need to get over it.”

Paynter also said he and others at the business have an idea who may be responsible for the crimes.

“I’m not going to mention any names but we have some ideas who may be behind all of this,” he said. “We think it’s very childish, and like I said, until we can prove who it is, it’s going to be tough to catch them. Whoever did this tagged the shed and the building.

“Hopefully the cops can find out who the tagger is and that may give us some information,” Paynter said. “It seems like every time we come out there’s something wrong. Come August, we will have been here for one year at this location.”