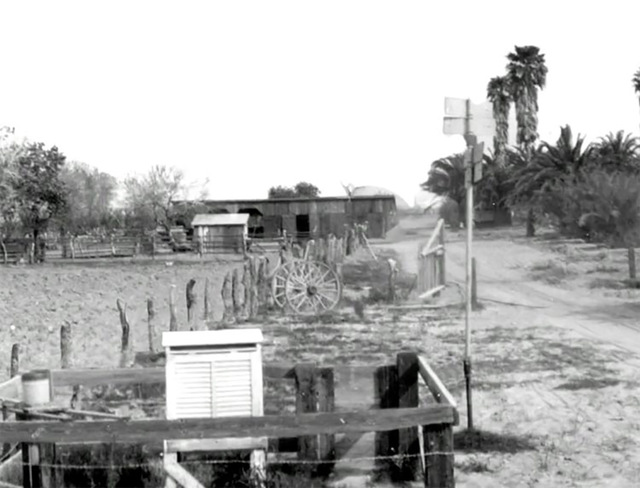 An undated photo shows what Death Valley’s official weather station looked like in the early 20th century, when it recorded what currently stands as the highest temperature ever recorded anywhere on the globe: 134 degrees on July 10, 1913. Courtesy of National Weather Service Las Vegas

A new analysis of a 103-year-old weather observation is throwing cold water on Death Valley National Park’s claim to the world record for heat.

According to the United Nations’ World Meteorological Organization, the official keeper and verifier of global climate extremes, the highest air temperature recorded anywhere in the world is 134 degrees at Death Valley’s Greenland Ranch on July 10, 1913.

But California climatologist and storm chaser William T. Reid believes the record is bogus, and he’s got decades of exhaustive research to back him up.

“It’s essentially not possible from a meteorological perspective,” Reid said.

The only explanation is “observer error,” he said.

The record reading was collected by ranch caretaker and weather observer Oscar Denton during a seven-day run of terrible heat in the summer of 1913 when the temperature reached 127 degrees every day and topped 130 three times.

That week, Denton logged five of the hottest temperatures ever recorded in Death Valley, including the record-setter.

But none of the other weather stations within a 150-mile radius posted unusually high readings during that time, and Death Valley hasn’t seen a single 130-degree day in the 100 years since, Reid said.

Reid described Denton as a relatively inexperienced weather observer who might have been more interested in bragging rights than scientific rigor. “It looks like this observer just made it up,” he said.

Reid has been chipping away at the record off and on since the 1980s when he first challenged its validity as part of his master’s thesis.

Will record be re-examined?

Weather historian Christopher Burt published a summary of Reid’s investigation on Oct. 24 on the website Weather Underground. He also contacted the World Meteorological Organization to see if it agrees a review of the record is warranted.

In an email Thursday, the WMO’s rapporteur of weather and climate extremes, Randy Cerveny, said his organization would defer to the U.S. National Climate Extremes Committee to evaluate Reid’s claims.

That committee’s chairman, Deke Arndt, was noncommittal. “If we do act, we’ll act on a timescale appropriate for thoughtful inquiry, the gathering of resources and experts, and very likely would consider (Burt’s) blog as one of several inputs and indicators,” he said by email Friday.

Reid and Burt met in Death Valley three years ago at a National Park Service event to mark the 100th anniversary of Denton’s 134-degree reading.

Death Valley has only held the world record since 2012, when a WMO panel discarded the previous all-time high of 136 degrees, supposedly set in 1922 at El Azizia in present-day Libya.

Burt also played a prominent role in that disqualification, which came after an in-depth, year-long investigation that was delayed for several months by the revolution in Libya.

Should Denton’s Death Valley number fall, a reading of 131 degrees recorded on July 7, 1931, in Kebili, Tunisia, would become the new world record — assuming that observation is allowed to stand.

Burt has already raised concerns about it.

“That’s even more of a bogus record than Death Valley or El Azizia,” he said, noting that Tunisia hasn’t seen a high above 118 in the 85 years since the reading.

So where might the world record land if both 134 and 131 join 136 on the scrapheap of history? Death Valley, at least in part.

Burt said the national park 100 miles west of Las Vegas has hit 129, the next highest temperature on record, seven times over the past century, most recently on June 30, 2013.

The 129-degree mark also was reached in Israel in 1942 and Kuwait and Iraq in July of this year.

It’s enough of “a can of worms” that the WMO might decide not to re-examine the record, Burt said. “I would say Death Valley wins in either case.”

Reid said staff members at the national park should welcome his review of the 134-degree record. With that inflated number out of the way, they have a much better chance of setting a new world record for heat someday. “All this time they’ve been coming up way short. I bet they’ve been wondering why,” he said.

Abby Wines is a management assistant at Death Valley National Park, where she has worked for the past 11 years.

The mercury has hit 129 at least twice during her time there. She compares the sensation to sticking your head in an oven to check on dinner. “It seems like everyone has a different physiological reaction,” Wines said. “In my case, my forehead gets numb and tingly.”

So far, the new questions about Death Valley’s old heat record haven’t caused much of a stir among park staff members. “Most people shrugged. This is really not that big a deal to us,” she said.

The one exception might be the manager of the gift shop at park’s visitor center in Furnace Creek, California. “He probably won’t be happy,” Wines said. “He has some T-shirts that say 134 on them.”