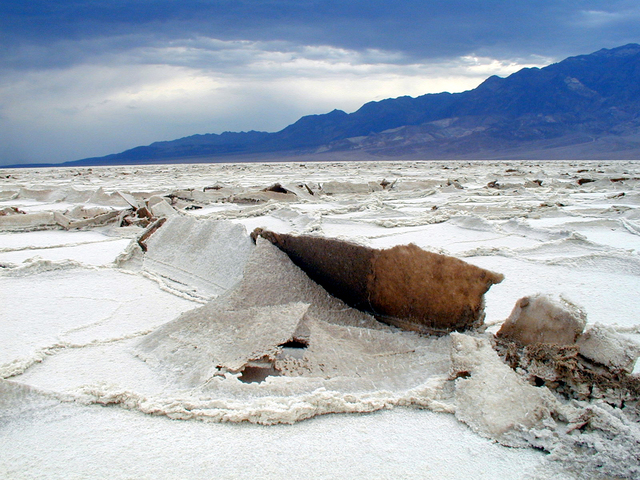 Death Valley National Park saw the hottest June on record for the area. Tourist still flock to popular sites during the scorching summer months including the salt flats near Badwater. Courtesy of the National Parks Service

DEATH VALLEY N.P.  When an area sees record-breaking heat numbers it usually catches ones eye, but when the place setting records is the hottest place on Earth thats a whole other story.

The record number is about six degrees above normal for the month, as the average temperature over the past 105 years was 95.5 degrees, at the official weather observation spot, Furnace Creek.

With the early onslaught of sweltering heat, Death Valley officials are concerned with what temperature the area could see next.

Were not even in the hottest part of the summer yet, said Mike Reynolds, Death Valley superintendent. Who knows what July and August will bring.

Reynolds also cautioned that just because night falls, that temperatures still can be in the triple-digit range.

The average temperature sounds hot enough, but when you break it down, you can really understand the extreme summer conditions in Death Valley. People expect a desert to cool down at night, but the night of June 21st only cooled down to 101 °F, he said.

Death Valley holds the record for the highest officially recorded temperature on the planet of 134 degrees, which occurred on July 10, 1913.

Showing just how sweltering the heat has been this year, Death Valley has already seen eight 120-degree days, meeting the yearly average, with most of July and August left to send the mercury soaring on the thermometer.

Despite the impressive heat numbers, visitors still flock to the national park in the hot summer months.

Death Valley National Park receives more summer visitation than you might expect. August is the parks third busiest month, behind only March and April, Reynolds said. Many of these visitors are from other countries and they come here to experience our world-famous extreme temperatures. I respect those visitors. Think about it … summer is the time to experience the thing that makes Death Valley different from any other place on Earth.

Being informed is key to those who want to experience the extreme heat Death Valley sees and remain safe, according to Reynolds.

We advise park visitors to drive on paved roads and not to walk very far in the summer. Cell phones dont work in most of the park, and being stranded in high temperatures can quickly turn life-threatening, he said. A few weeks ago a German motorcycle rider died on the unpaved Harry Wade Road. If he had been on a well-traveled road, other park visitors would have seen him and taken him into their car to cool off. That probably would have saved his life.

Other travel tips include: wearing a hat, light-colored loose-fitting clothing, and to drink plenty of water. Humidity in Death Valley is usually very low, often below 10 percent.

People dont realize how much theyre sweating, Reynolds said. Bring at least one gallon of water per person per day – and drink it.

Visitors come to see sites at various elevations in the park, including low elevation sites like Badwater (282 feet below sea level), and hikes to Wildrose Peak (elevation 9,064 feet) and Telescope Peak (elevation 11,049 feet) which are best carried out in warmer months when they are not covered in snow.

The highest temperature ever recorded in Death Valley in June occurred on June 30, 2013 with a 129-degree high temperature.