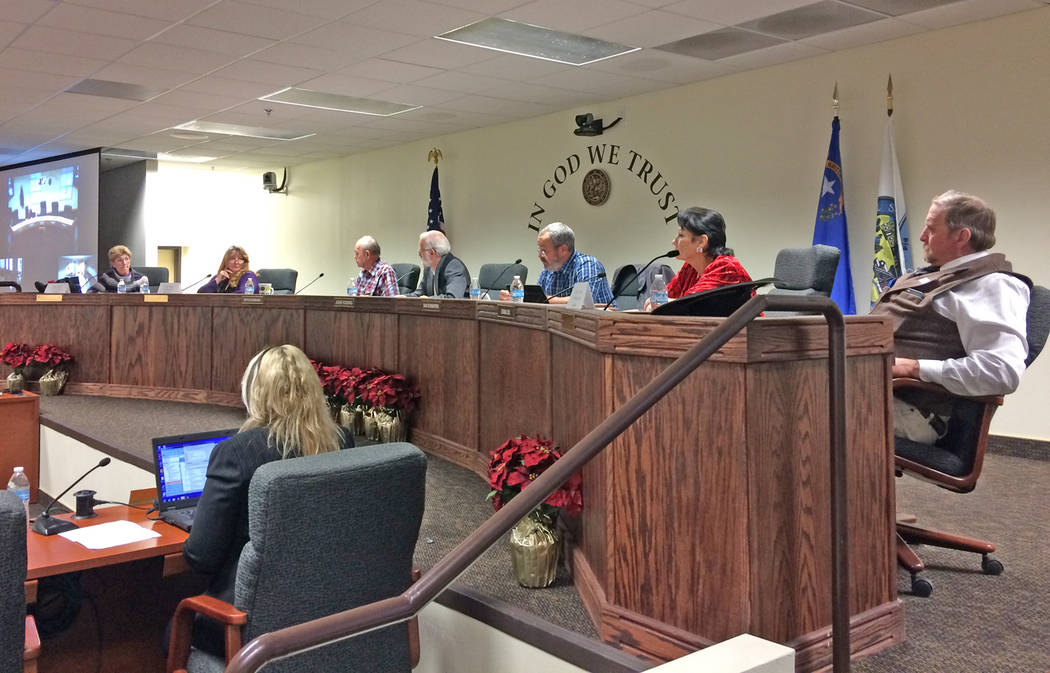 Robin Hebrock/Pahrump Valley Times Members of the board of county commissioners for Nye, Clark and Lincoln counties are shown at the Dec. 7 joint meeting in which the appointment of Greg Hafen II to the Nevada Assembly District 36 seat was made official.

The hearing for local resident and former Assemblyman Ed Goedhart’s lawsuit against Nye County over the appointment for the Nevada Assembly District 36 seat has been delayed.

Goedhart originally filed a complaint for declaratory and injunctive relief on Nov. 27 in an attempt to stop the current Nye County Commission from making a selection for the District 36 seat, which was vacant as a result of Dennis Hof’s posthumous win in the 2018 general election.

Following this, with the knowledge that the commission was planning to make its pick for the seat in just a few short days, on Dec. 3 Goedhart filed a request for an emergency hearing. That request was not granted.

Instead, Fifth Judicial District Court Judge Robert Lane had set a hearing date of Dec. 19 and in the meantime, on Dec. 7 the appointment of Greg Hafen II to the seat was confirmed by the three county commissions involved, those for Nye as well as Clark and Lincoln counties.

On Dec. 11 Goedhart filed an amended version of his request for declaratory and injunctive relief, asking that the Dec. 7 appointment be vacated and set aside so as to allow the newly elected commissioners to make the appointment after they are seated in 2019. This apparently prompted Lane to alter the hearing date.

According to the order vacating the December date, the hearing was rescheduled as a result of Goedhart’s latest filing, with the order noting, “…the court finds it appropriate to vacate the hearing on Dec. 19, 2018 so that adequate notice and time to respond can be given to defendants regarding the new claims and arguments being made…”

Documents accompanying the order to vacate the December hearing detailed that the order was mailed to Goedhart’s legal representation, Craig Mueller of Mueller, Hinds and Associates, on the same day it was signed, Dec. 12.

Goedhart said he was somewhat surprised by the change in the hearing date as he did not receive notification of the action until Dec. 17.

However, he said he was not discouraged and expressed his intent to continue pushing the case until its conclusion, even if that means eventually having to take it to the Nevada Supreme Court.

“The order by the judge was a last-minute, panicked request for more time by Nye County. The law is on my side,” Goedhart stated on the change in the hearing date. “The Nevada Constitution is on my side and an extremely competent and experienced legal team is representing me and the disenfranchised voters of Nye County. Unable to defend the indefensible, Nye County had no other choice but to delay the day of reckoning. But at the end of the day, even though justice may be delayed, it will not be denied.”

Nye County, however, has stated that it does not believe Goedhart’s lawsuit has merit and has expressed confidence that the county will be the victor in this legal tangle.

When reached for comment on the new hearing date, Nye County Public Information Officer Arnold Knightly responded, “Based on the judge’s assessment of the case in his prior ruling, the county doesn’t expect anything to change,” referring to judge Robert Lane’s ruling to deny Goedhart’s request for an order shortening time to allow for an emergency hearing.