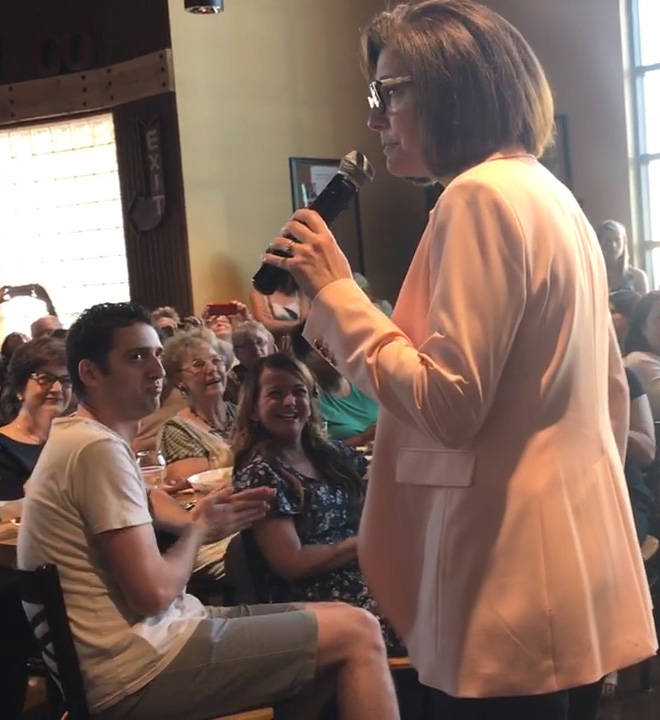 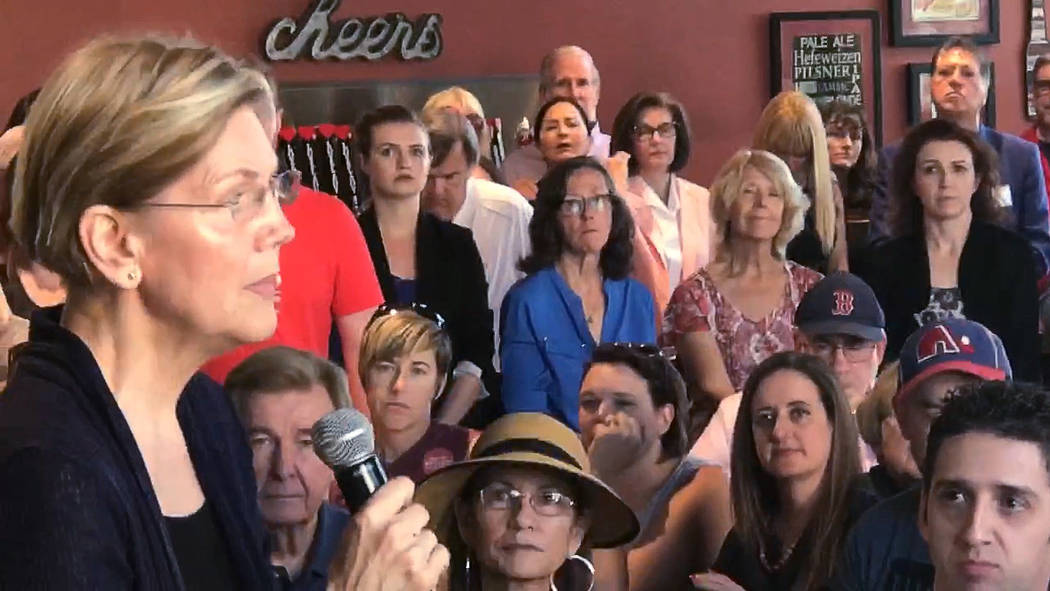 Jeffrey Meehan/Pahrump Valley Times Massachusetts Sen. Elizabeth Warren (left) speaks on the Trump administratoin's zero-tolerance policy on immigration and other topics affecting the U.S. and Nevada at a fundraising event at Lovelady Brewing Co. on June 23, 2018. Warren spoke at the Democratic State Party Convention in Reno on the same day. 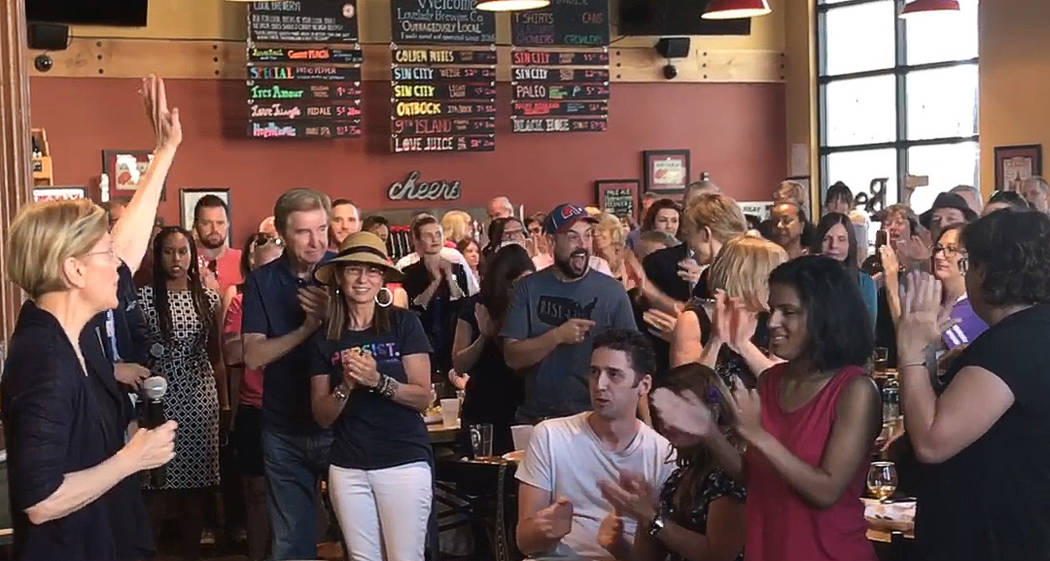 U.S. Sen. Elizabeth Warren stomped across Nevada to whip up support against President Donald Trump and the Republican Party, along with garnering support for Democratic candidates in the state.

Warren blazed through Henderson on Saturday with U.S. Sen. Catherine Cortez Masto, D-Nevada, to speak at a fundraising event at Lovelady Brewing Co. in Henderson.

The Massachusetts senator called it a “dark time” in her opening — denouncing many of Trump’s recent actions on immigration and other policies supported by the administration.

Warren, the event’s keynote speaker, attacked the overhaul of the U.S. tax code, which she criticized as benefiting the wealthy and large corporations. Overall, the plan is set to lead to a reduction in federal revenues due to tax cuts. This, essentially, will put a strain on the resources available to address several issues the nation is facing, according to Warren.

Some of the limitations noted by Warren included investing in infrastructure, reducing student-loan debt and fighting against the opioid crisis.

Reports have estimated that there will be a $1.5 trillion decrease in federal revenue over the next decade due to the overhaul in the tax system.

The Massachusetts senator, considered to be a top potential candidate on the Democratic ticket in the 2020 presidential election, iterated further on the need to invest in things like infrastructure.

“How do you build a future in this country? You do it through building infrastructure,” she said. “That’s part of what government does. It builds the infrastructure, so we can go forward.”

Warren took on student loan debt during her speech, pointing out that the U.S. government is set to make billions of dollars “off the backs of young people” who may have to fund their education by borrowing.

Trump was also in Southern Nevada on Saturday. During his visit, the president gave the keynote address at the Republican GOP convention in Las Vegas, headlined a private fundraising event for U.S. Sen. Dean Heller, R-Nevada, who is up for re-election in November, along with hosting a private roundtable discussion on tax reform.

Warren blasted Trump’s comment, referring to her as “Pocahontas” in his speech at the Nevada GOP convention at the Suncoast casino in Las Vegas on Saturday. The president created the nickname for Warren during the 2016 election cycle, when he questioned what some news outlets refer to as Warren’s self-proclaimed Native American heritage.

During the convention, Trump also spoke about Heller’s opponent, U.S. Rep. Jacky Rosen, D-Nevada, who is vying to take Heller’s seat in November.

“Wacky Jacky is campaigning with Pocahontas,” Trump said at the GOP’s state convention, according to a report in the Las Vegas Review-Journal. “Do you believe this? In your state. And they don’t know how to say Nevada.”

Warren also spoke against Trump’s immigration policies for legal and illegal immigrants during the Henderson event. The senator particularly scrutinized Trump on his “zero tolerance” immigration policy that separated migrant children from their families.

“You know what the current immigration policy is?” Warren said. “How much pain can I inflict on anyone who wants to come here from another country? That’s the basic policy right now, and that does not reflect American values.”

On Tuesday, the U.S. Supreme Court ruled in favor of Trump’s travel ban, which put a restriction on travel to the U.S. from a handful of mostly Muslim countries in a 5-4 decision.

Warren and Cortez Masto spent the early part of Saturday in Reno at the Democratic State Party Convention at the Grand Sierra Resort.

The majority of Democrats on the ballot in 2018 spoke at the convention. Rosen and Clark County Commission Chairman Steve Sisolak, who has the Democratic party’s nomination for the 2018 Nevada governor’s race, were speakers, the Review-Journal reported.

Cortez Masto also spoke at the event and highlighted what’s at stake for the Democratic Party in the 2018 election cycle. The senator highlighted the fact that Sisolak could be the first Democratic governor in the state in two decades.

“This November, we have an opportunity to be one hell of a check on Donald Trump,” Cortez Masto said in the Review-Journal report. “That path to victory starts right here in Nevada.”