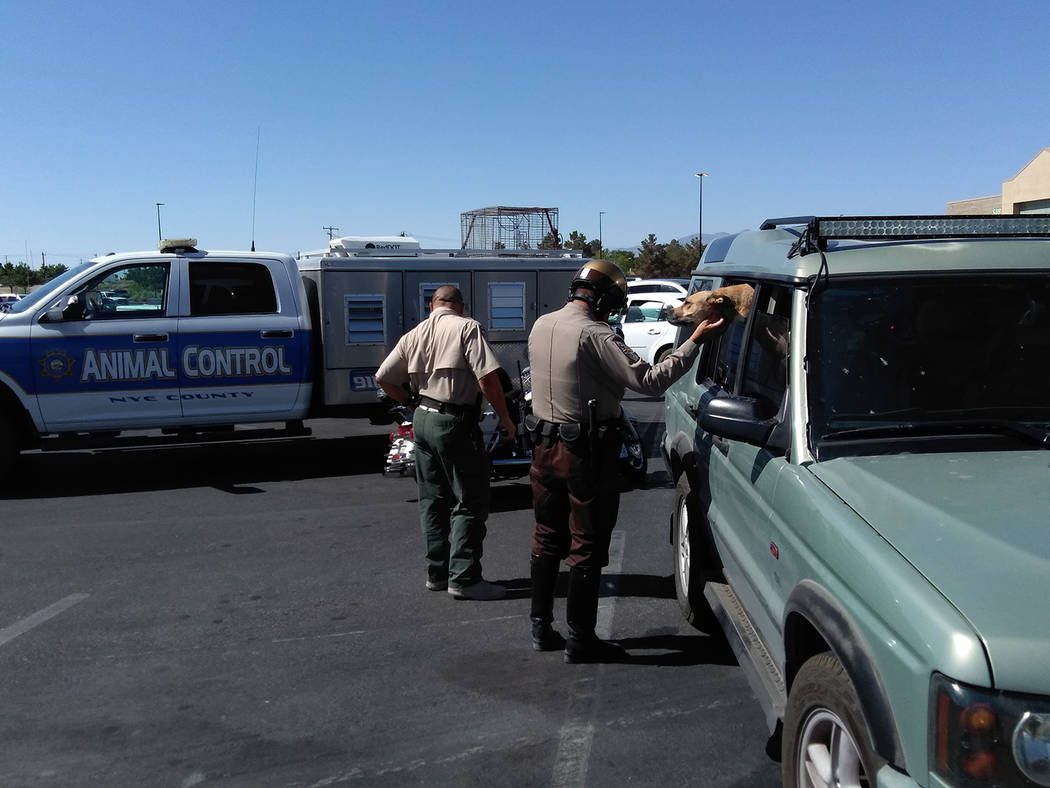 Selwyn Harris/Pahrump Valley Times A Nye County Sheriff's Office deputy comforts a dog that left inside a vehicle in the Walmart parking lot on Tuesday June 26. At the time, the interior temperature in the vehicle was 107 degrees according to Deputy Joe McGill. 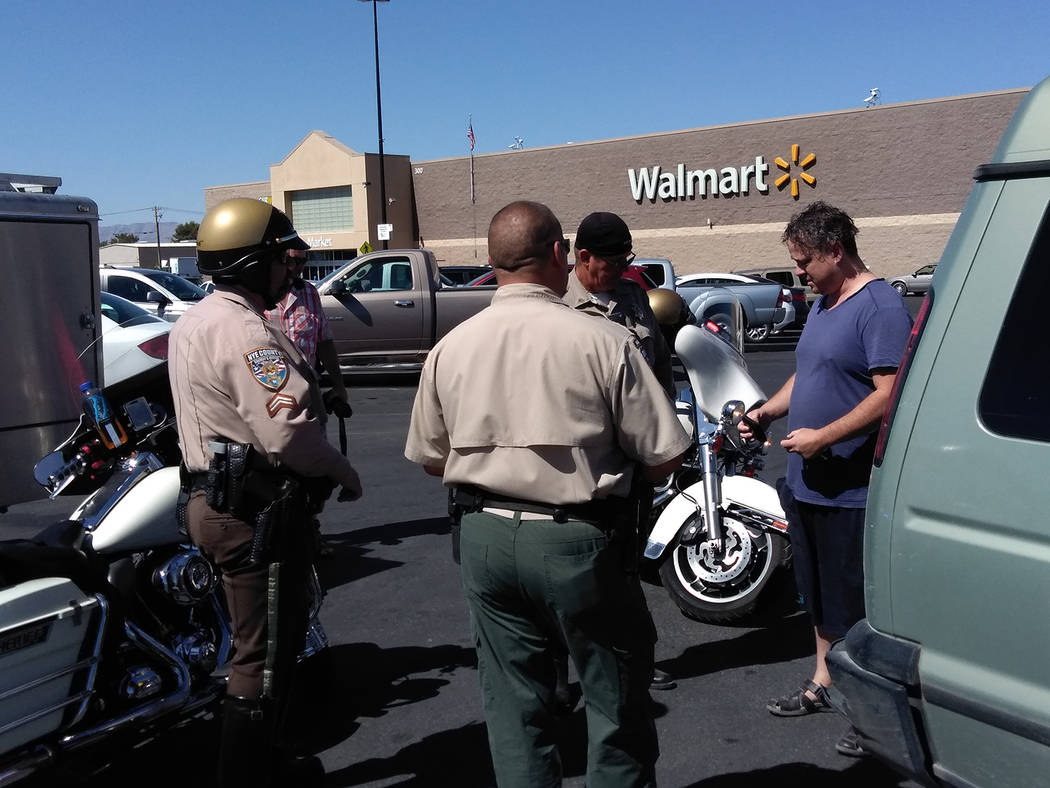 Selwyn Harris Pahrump Valley Times The owner who was eventually located by store security after more than 10 minutes received a stern warning from deputies and Nye County Animal Control Officer Levi Gregory, who noted that if a dog in distress is locked inside a hot vehicle, he has the authority to remove the animal, at the owner’s expense, and issue a citation totaling $647. 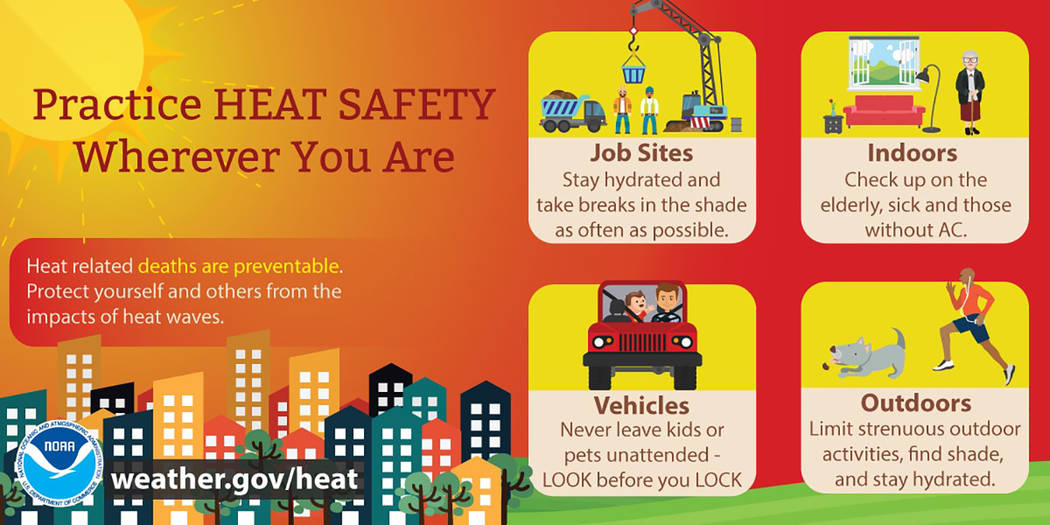 It has happened again.

Last week, Nye County Animal Control responded to the Walmart parking lot regarding two instances of dogs being left inside a hot vehicle as the owners shopped inside the air-conditioned store.

The incident occurred just after 9:30 a.m. on Tuesday, June 26, where the outside temperature registered 93 degrees.

Keen-eyed Nye County Sheriff’s Deputy Joe McGill, who just happened to be on routine patrol in the parking lot, managed to spot the dog.

He also took a reading inside the vehicle, where the interior temperature registered at more than 100 degrees.

“I was patrolling the Walmart parking lot and I spotted a dog inside of a car where the windows were partially opened but not a whole lot,” McGill said. “While I was looking in that car, I was approached by a female who said there was another car right across from this car with a dog inside of it. We managed to get a hold of the two owners, and advised them that it is not safe for them to leave their dogs locked in the car even when the windows are partially rolled down.”

McGill lamented that the same situation seems to occur each year when daytime temperatures rise significantly.

“This happens every summer and people just forget about it and don’t think about it,” he said. “They think they’re only going to be inside the store for a minute or two, but it winds up being 30 minutes, such as this case. Bottom line, it’s just not good for the dogs or any animals, and especially children obviously.”

“Every summer we get calls regarding dogs being left in cars,” he said. “Luckily, right now it’s only 105 degrees inside the vehicle but at 110 to 115 degrees, dogs start losing cells in their liver and their brain which can result in death for pets, and especially children with these escalating temperatures.”

Gregory also said if a dog is locked inside a hot vehicle, he has the authority to remove the animal, at the owner’s expense, and issue a citation totaling $647.

“They would have to pay to get the dog out of the animal shelter, as well as any vet bills that may occur as a result from the care of the animal being exposed to those kinds of conditions,” Gregory said. “We advise all pet owners, if at all possible, to leave their pets at home and not take them to the store, especially if they are going to leave them inside the vehicle while they do their shopping.”

Additionally, Gregory said that it doesn’t take a vehicle long to heat up while parked.

Both he and McGill waited roughly 10 minutes before the owner of one of the vehicles was located inside the store.

“It could take roughly five to 10 minutes before that temperature inside the vehicle rises to 125 to 130 degrees, which is at a critical state for the animal,” Gregory said. “At least for this owner, right now, we are watching the dog to make certain it does not go into distress. Once the owner comes out, they will be warned about the hazards of leaving their animal inside the car. Obviously, it is always best to leave your dog at home rather than in a hot car in a parking lot at a shopping center.”

McGill, meanwhile, said while neither owner was cited, the incident should serve as a warning to anyone who believes it’s a good idea to bring their pets along while out running their daily errands.

“It is best just to leave your dogs at home,” he said. “Many times you will see people walking through the stores with their animals, which is not out of the ordinary, but those who insist on bringing their animal along must do something better than leaving them locked inside of a hot car in the summertime in Southern Nevada. Sadly though, I expect to see this happen again because we are just in the beginning of summertime.”

Darcy Spaulding, who manages the General Nutrition Center (GNC), store across from Walmart said she has witnessed numerous incidents in the parking lot where people lock their pets in their vehicles.

As a result, she and an adjacent business owner decided to take action, by way of social media, where the idea is to shame the pet owners.

“I see this sort of thing happening all of the time each summer,” Spaulding said. “My friend from Sally Beauty and I created a website called Animals Left in Hot Cars in Pahrump, and so far we have about 200 followers. We just encourage everyone to post pictures of people who leave their animals inside their cars while they go shopping. We see it every day here in the parking lot and now that summer is here, it is ridiculous that people still do that. We have called law enforcement or animal control regularly when we see this sort of thing happen. Now that the weather is much warmer, this is completely unacceptable.”