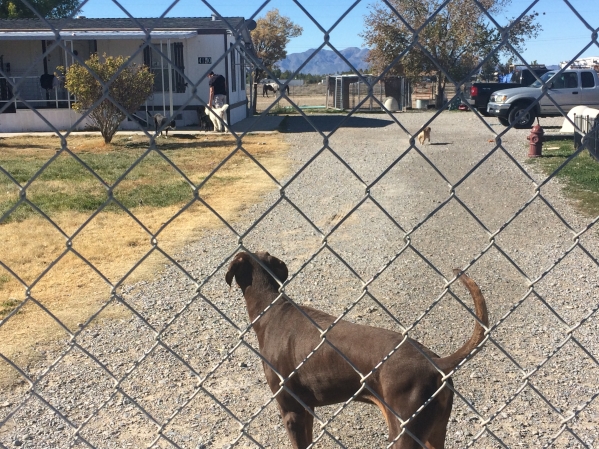 Since Jane Young founded a dog rescue in Pahrump, her operation grew into a nonprofit organization that now aims to absorb dogs that can’t be taken by the shuttered county shelter.

Young, co-founder and president of Furgotten Friends Dog Rescue, located at 4150 S. Jackie St. in Pahrump, was recently allowed to expand her operation to 35 dogs after she had applied for a reconsideration and modification of a conditional use permit.

“When we started, we had no clue where this journey was going to take us,” Young told the Pahrump Regional Planning Commission. “We started out with a box of seven puppies that one almost died that night, we saved it. So when we became a 501c3 and came in front of you guys, whoever the board was at that time, we were very small, and we figured we were going to be small. Economics changed, and we realized that we filled a very important part of the community. Then the animal shelter faces the financial crunch and any dogs that they intake. If owners don’t claim them, they’ve reached out to rescues to pull in the dogs and take them to our rescues and find new homes.”

Nye County Animal Shelter, the largest in the county, closed its doors to the public last June due to dire financial straits. Members of the Nye County Animal Advisory Committee recently hammered out a list of recommendations for Nye County commissioners that specified several short and long-term funding options.

The original conditional use permit allowed six dogs at the business. Young said she currently has 10 personal and six rescue dogs. The business is also looking to get eight to 10 dogs into foster homes.

Nye County Animal Control records show that that there were no complaints about this property and the property owner has always complied with inspections and other requirements.

“The request is in conformance with a master plan and zoning ordinance and can be viewed as a benefit to the community in authoring additional resources to (Nye County) Animal Control based on these findings and others outlined in these staff reports, staff is recommending approval of this request,” Nye County Planner Beth Lee said.

Furgotten Friends Dog Rescue had originally applied for a reconsideration of a conditional use permit that would allow 30 to 40 dogs, but after some of the commission members questioned whether it would be appropriate for a residential area, the number was reduced to 35.

In addition, officials received several letters in support and one in opposition of the expansion.

Addressing noise concerns that were brought up during the meeting, Young said the business plans to get a kennel silencer.

“It’s commercial version and it’s designed to help the dogs learn to not bark. And we are looking into getting one of those so that we can keep any noise down,” she said.

In a letter to the commission, Young said the business eventually plans to relocate to a commercial district and create a facility that can encompass the rescue, rehabilitation and rehoming of the abandoned and surrendered dogs with a spay and neutering clinic, a low-cost vaccination clinic and a training program for new owners.

“With being limited to six dogs, it makes it very hard for us to help out,” she said. “We need a spot where we can bring the dogs, evaluate them, see what kind of rehab we need to do. If they need any medical attention, they get it immediately. Then, we can find fosters for these dogs. That way, we can help out the community even more. That stated, we are in the process of looking to have our own facility. It will not be located in a residential area, we will be in a commercial area. That is our goal. That is the future of Furgotten Friends.”