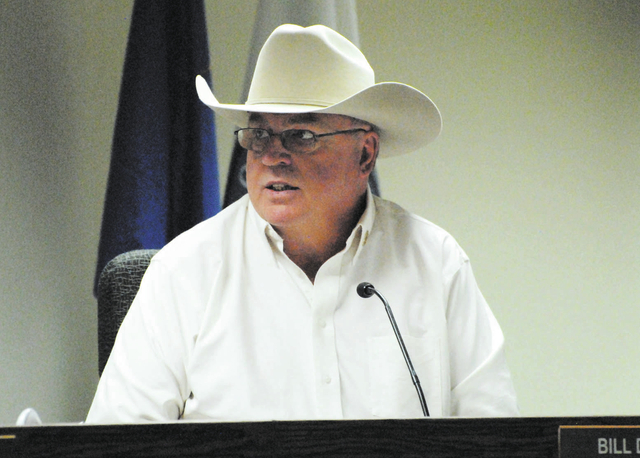 As a self-described “fiscally conservative Bob Dole Republican,” Dolan was an unsuccessful candidate for State Assembly and for the North Las Vegas City Council.

He has served on the executive board of the Clark County Republican Party and the North Las Vegas Parks and Recreation Advisory Board.

He was first appointed to the town board in 2008 by then Gov. Jim Gibbons.

Last year, Dolan was elected to the town board and has since ascended to the position of vice chairman.

Q: When did you decide to run for Commissioner Schinhofen’s seat?

A; It’s been in the works for about four months. I had been approached by some residents in the community to run and my wife and I had to take a long hard look at where we wanted our career paths to go as we start to get a little older. We thought, talked and prayed about it and finally made the decision to go ahead and jump into the race.

Q: Was your decision related to the possible demise of the town board which is now being reviewed by the Nevada Supreme Court?

A: Not at all. That decision is still in the courts and we’ll let that play itself out. It had absolutely no bearing on my decision to run whatsoever. I was elected by the people to carry on and do the work of the people to the best of my ability for them. Until some legal authority comes by and says my term of office is up by December 31st 2016, I will move on.

Q: What are your thoughts on the present board of commissioners as well as your opponent?

A: You have a very broad range of commissioners and thought processes on the county commission and they have a tough job to do. I’m not going to sit back and Monday morning quarterback them. They make their decisions. As far as Commissioner Schinhofen, he and I agree on a few issues and disagree on other issues. It’s not personal against Mr. Schinhofen. I feel that our platform and decision making to move the community forward is in better working with the community and that’s what we’re going to bring to the table.

Q: Many eyebrows were raised roughly five years ago when then Gov. Jim Gibbons appointed you to the town board, essentially circumventing an established local selection process. What are your recollections on that issue?

A: Now the county commissioners are responsible for making the appointments within their counties and there are several different pieces of policy out there where one says the town board of the board in question would be asked for recommendations to the county which would then be made to the governor’s office. However what everyone seems to forget is that I, just like everyone else when asked to fill out an application, when I was asked by the governor to submit my paperwork, I did it legally and in the same time frame that everybody else had. At that time it ultimately rested with the governor to choose who he felt was the best person to have that position. Now that duty rests with the county commissioners. Even though they have made no appointments here in the Town of Pahrump, I do know they have made appointments throughout the county already.

Q: Can you talk about your political career in both Clark and Nye County?

A: Years ago, I was asked to run for the North Las Vegas City Council to get my name out into the party. I had worked behind the scenes as a volunteer for Mayor Michael Montandon in North Las Vegas. The party also asked me to run for Assembly District I against Marilyn Kirkpatrick and I lost to her by a small margin of votes in my primary. I think she is doing a fantastic job from what I can see.

Q: On the issue of effectiveness and performance how would you rate the sitting District 5 commissioner?

A: They have a hard job to do up there and I’m not going to second guess them. Personally I would have to say he rates at a four to four and a half. I’m not going to degrade the individual but I just think that some of our thought processes are little bit better and more stable across the board.

Q: After serving two terms on the town board combined with your previous political experience, do you think you have an advantage over the commissioner?

A: I don’t really know if it gives me an advantage but it gives me the experience to the idea of if there is a problem. I use the same philosophy right now. Aside from my history in politics and currently sitting on the board, I have the experience of sitting on the different advisory boards and the non-profits. I also serve on the planning commission and am third vice president of the Nevada League of Cities for the entire State of Nevada. On that end, we have been very busy trying to work with our federal elected officials as a group and sending resolutions to them showing the league of cities’ stance on the government shutdown and why it needs to stop. We need to work together and the states nor the counties, cities and towns can afford to pick up vitally needed benefits that the federal government sponsors and pays for. I also think that my network is probably a lot larger than commissioner Schinhofen’s and that is just from the contacts and the people that I know and work with.

Q: What’s your opinion on the relationship between Nye County and the Town of Pahrump?

A: Right now, I think some of us are working well together between the staff’s and elected officials. As for myself, I have been involved with several seminars lately with County Manager Pam Webster and other county officials and it has been a distinct pleasure to work with them and trying to understand their thought processes compared to the town’s thought processes.

Q: How do you envision your campaign as we move towards Election Day 2014?

I have always run a clean campaign and I have always said that there is no need to run a nasty campaign but don’t get me wrong on the other hand. If I’m attacked, I will respond and I will stand my ground.