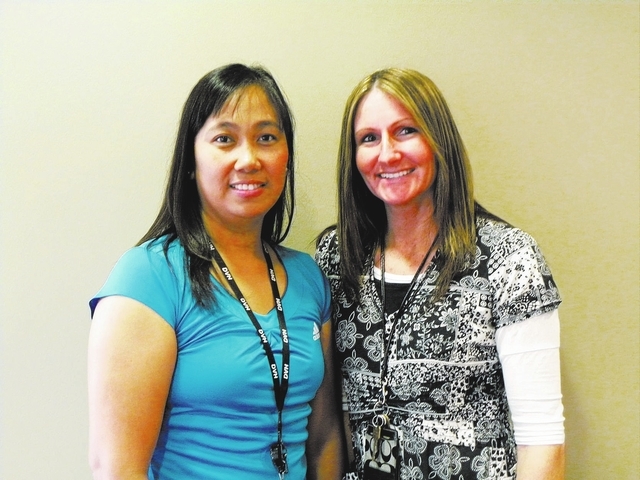 Gia Ann Domingo knows how sweet it is to realize the American dream.

After seven years, with the support of her co-workers and hospital staff, the unit secretary at Desert View Hospital was recently able to pass the state’s nursing exam, a difficult step forward on the road back to a job she said she was born to do.

Domingo first came to the United States from the Philippines in 2007. Although she worked as a nurse in her home country for more than 10 years, Domingo took a job as a unit secretary at Desert View Hospital when she first came to Pahrump.

She said her plan was to take the National Council Licensure Examination (NCLEX), which would allow her to work as a nurse in Nevada, once she had settled in to her new home and had time to prepare for the test.

That plan, however, was put on hold when Domingo said she tried twice to take the test, but was unable to pass.

“At first I tried it on my own, just reviewing on my own and then taking the test. I did it twice, but I failed. So I decided I needed extra help with this, and since I graduated in 1991, I told myself I needed (the refresher course), but in the process I had a lot of things on my plate,” she explained.

In addition to supporting herself, Domingo was tasked with supporting her three eldest children she brought with her to the U.S. as well as her husband and youngest child she left behind in the Philippines.

“I was supporting two families, here and in the Philippines. My husband and my youngest child were left in the Philippines. So I was supporting my three oldest here and I told my husband not to go find a job because he would have to leave my less than 2-year-old son and I told him he doesn’t have his mom and you’ll have to leave him in the care of others. I don’t care what other people say about you being the father of the family not having a job, I just want you to stay with him. So I was sending money to him and supporting my three other kids here as well,” she said.

After she failed her second attempt to pass the NCLEX, Domingo said she made a promise to herself she wouldn’t take the test again until she could properly study for the exam.

Almost five years later, things seemed to begin to fall into place and Domingo said she was finally ready to take the licensing test again.

In 2012, after her father passed away in the Philippines, Domingo flew home to be with her family and soon after learned her husband’s visa to come to the U.S. had been approved.

She, her husband and their youngest son were then able to fly back to the U.S. together and finally have their family reunited.

Soon after she returned, one of Domingo’s supervisors at the hospital, Markeeta Araujo, learned Domingo was actually a trained nurse and began pressuring her to take a refresher course to get licensed to work as a nurse at the hospital.

“There’s absolutely, positively no reason for a nurse to be working as a unit secretary in a hospital. She’s been a wonderful, loyal employee of the hospital for years and as soon as I found out, it was like, okay, you have to go get your refresher course,” Araujo said.

And to help make the road to getting Domingo’s license easier, Araujo said the hospital agreed to cover her educational expenses.

“I spoke with the CEO to get approval to help her and he gave his approval. It took us almost a year to get her class and everything all done. But she got the refresher course in July, she got signed up to take the NCLEX, which is the nursing test, passed and then as of the first part of December she was a nurse,” she explained.

Domingo said the only thing she has left to do now is pass an English language test for the state.

“Some powerful being was at work. I really felt that,” Domingo said of the whole experience. “I guess if you’re really determined and you have a goal in life, I wanted to better myself and my family, that helps.”