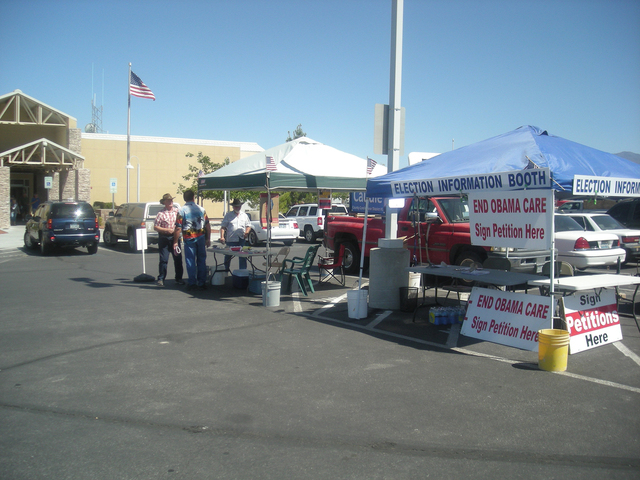 Over 10 percent of the registered voters have already voted early for the Tuesday primary election, according to statistics from the Nye County clerk’s office.

Early voting totals for this primary are already ahead of the total early vote for the 2012 primary, a presidential election year, but still a ways behind early vote totals in the comparable 2010 primary, the last time countywide officials were up for election.

Early voting ends today for the Tuesday primary election. Polls will be open from 7 a.m. to 7 p.m. on election day. Pahrump voters will cast ballots at J.G. Johnson Elementary School and the Bob Ruud Community Center.

Nye County Clerk Sam Merlino reported as of the end of the day Wednesday 2,825 people voted early, both at the Ian Deutch Government Center in Pahrump and the county courthouse in Tonopah with two days left to go, that’s 10.7 percent of the 26,424 registered voters in the county.

In 2010, there was a hotly-contested district attorney’s race, while this year, the sheriff’s race is the most competitive, with 10 candidates seeking to replace Tony DeMeo. Republicans in District 4 and District 5 can vote on competitive races in the primary.

The busiest day for early voting this year was the first day of early voting May 24, with 420 voters, according to the clerk’s office. When early voting resumed two days later after the Memorial Day weekend there were 403 voters making the trip to the voting machines. The daily numbers varied between 300 and 400 the next three days, dropping to a low turnout of 175 voters on May 31. For June 2 the clerk’s office had 262 early voters, there were 247 on June 3 and 263 on June 4.

This year, Round Mountain and Beatty voters will cast their ballots by absentee, due to a shortage of election workers.