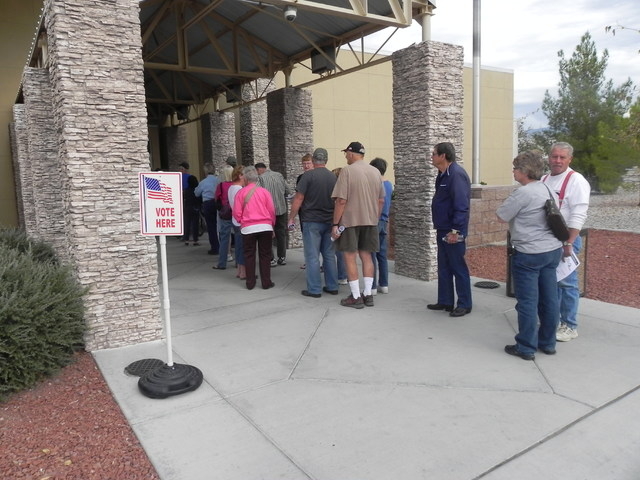 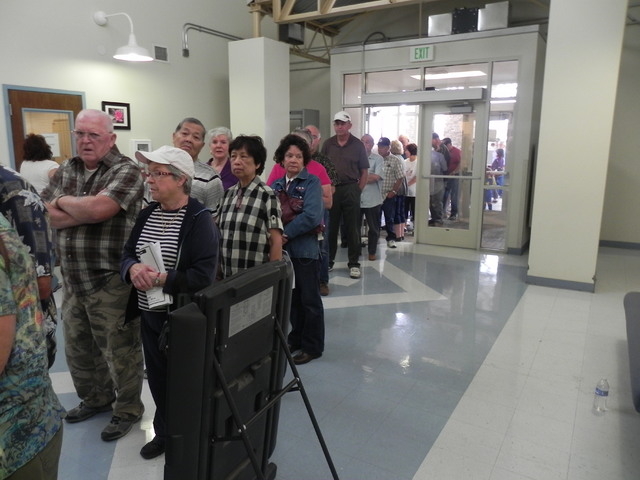 Early voting was brisk during the first three days, but not as busy as during a presidential general election, according to figures from Nye County Clerk Sam Merlino.

The clerk reported 602 people voted on Saturday, the first day, with 561 in Pahrump and 41 in Tonopah. By comparison, during the first day of voting in the 2012 presidential election 802 Nye County voters went to the polls.

Merlino said she considered a turnout of 500 early voters in one day in Pahrump about average for a non-presidential election.

“Saturday may have been a little different because we had a lot in the morning, we had close to 300 by 1:00,” she said.

There were more early voters on Monday, when the county clerk reported 650 people voted, of which 617 cast their ballots in Pahrump. In 2012 the clerk had 906 people voting on Monday.

In Pahrump people may vote early from 10 a.m. to 6 p.m. through Friday, Oct. 31, except Sundays when the courthouse is closed.

Early voting in mid-term presidential elections generally lags behind the presidential years, in 2010 there were 6,471 early votes cast in Nye County, in 2012 there were 8,797.

Merlino wanted to remind Pahrump voters who normally voted at J.G. Johnson Elementary School on election day they will now vote at the Ninth Grade Academy gymnasium on the corner of Calvada Boulevard and Mount Charleston Drive, due to a math symposium being held at J.G. Johnson.

Anita Springs, a candidate for justice of the peace, complained some of her supporters cast votes for her that showed up as a vote for her opponent, incumbent J.P. Kent Jasperson.

“I did not put my name on that ballot for a joke, nor am I someone to play with,” said Springs, a paralegal for Pahrump attorney Carl Joerger.

“People told me they would hit my name and it would automatically go over to Jasperson’s name,” she said.

“She called me and she was screaming and hollering, said she had eight people who wanted to vote here and couldn’t,” Merlino said.

Merlino said her only complaint was from a husband and wife who inadvertently skipped that J.P. election page on the ballot. She immediately notified the Secretary of State’s office.

Merlino urged voters to exercise some care when voting with the touch screen computer. If they hit a person’s name with their knuckle it could accidentally count as a ballot for someone else as well, an issue that arose in the U.S. Senate race in 2010 when there were complaints about accidental votes for Harry Reid.

“I didn’t even get a chance to ask her who, so we can find out what happened,” said Merlino of Springs’ complaint.