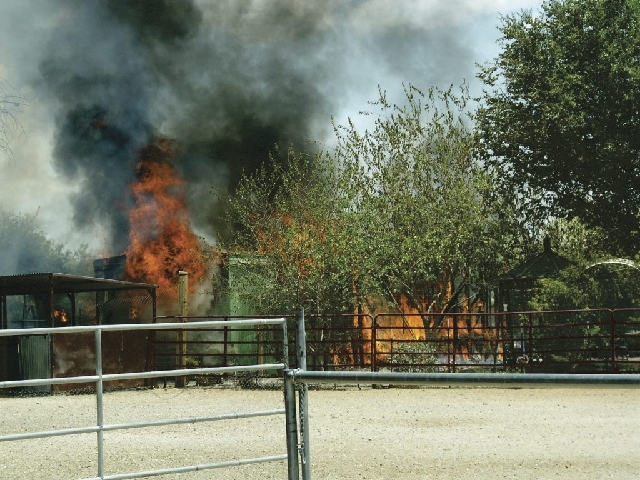 Electrical issues inside two Pahrump homes are believed to be what sparked fires over the weekend that claimed the lives of more than a dozen pets in the valley.

Pahrump Valley Fire Rescue Services were first dispatched Friday afternoon for a report of a structure fire in the area of 280 Nopah Vista Ave. that was called in by concerned neighbors.

When firefighters arrived on scene, they found a manufactured dwelling with flames coming from a front room of the residence.

A resident of the burning structure explained his family had gone into town earlier that day to run some errands and returned to see firefighters attempting to save their home.

Nye County Animal Control was also called to the scene after several dogs were discovered on the property. Animal control officers quickly removed the dogs, placing them in their air-conditioned vehicle, and were soon after informed by the family that there were three cats inside the home as well.

Once the fire was extinguished, animal control officers went up to the home to begin looking for the lost animals.

They immediately found one of the cats alive near the front portion of the home. The black and white cat was quickly scooped up and taken to be treated for fire-related injuries. The other two cats were reportedly found deceased inside the residence.

Though an investigation of the fire remains ongoing, Fire Chief Scott Lewis said it appears an electrical problem in the front portion of the structure is what sparked the accidental blaze.

On Saturday, firefighters were called out for another report of a structure fire around noon, this time on the south-end of town at a pet crematorium located at 4061 Daag Cir.

Lewis said when crews arrived on scene they discovered a fully-involved structure fire involving the primary residence on the property.

“The structure was fully involved with numerous exposure structures and pens containing pets or animals. There were horses, llamas, burros, everything, pigs, just a myriad of different animals on the property,” Lewis said. “The surrounding animal pens, the ones that weren’t involved in the fire, were saved and the majority of the animals were also moved to another area on the property.”

A resident at the address said she had no idea how the fire started.

“This was an animal sanctuary and also Pet Cremation Services. I live here and the fire was on the residential side. I have no idea how this happened. I would assume some kind of an electrical short. It was a matter of seconds and it was gone,” Sheri Allen, owner of Pet Cremation Services and the property, said.

A Pahrump resident since 1971, Allen said the fire left her business untouched, but she will have to find a place to live.

“I know that two birds died, but we got one out and I don’t know how many cats died. They were ones that were rescued for one reason or another but I always considered them mine. Once they come here, they are my personal pets and my responsibility,” she said. “I have been open for 18 years and one way or another we will not close. I’m not sure how I’m going to swing it but I will. The house is gone but the business was untouched so I just have to get power to my office machines and my computer and we’re good to go on that. I can sleep on my office floor. All I have is what I have on my back and that’s pretty much it.”

Though emergency responders were able to save a large number of the animals on the property, approximately 12 cats were reportedly found deceased inside the fire-damaged home.

Based on an investigation into the incident, Lewis said the fire appears to be accidental in nature and may have been caused by an overloaded or over-heated wall socket in the residence.

Firefighters remained busy for the remainder of the day Saturday as they were called to respond to nearly 20 fire-related calls that evening caused by the high-wind storm that rolled through the valley.

Lewis said his department received numerous fire-related calls within an hour-and-a-half period that included two fires, reports of electricity arcing across power lines and down power lines across the valley.

“It really started about 8 p.m. and we managed about 17 or 18 fire-related incidents within about an hour-and-15-minutes to an hour-and-a-half,” he said.

The first call was to a home near Pinewood Street for a report of a resident’s backyard catching fire.

“There was a fire to the rear of Pinewood and it involved some ground cover that went to a wooden fence and was on the verge of impinging on a garage. But crews got a good handle on that in the midst of the 50-mph-plus winds. They did a great job controlling that with no further extension. And this was while other calls were going out simultaneously,” Lewis said.

Shortly after PVFRS responded to that call, they were asked to respond to the parking lot of Best Western for a report of a palm tree that had caught fire.

When crews arrived, Lewis said the tree was showering embers on the roof of the hotel.

As firefighters were in the middle of extinguishing that fire, a utility pole on the property also fell into a nearby structure, breaking its power lines, which landed across the top of one of the fire engines on scene.

“In the middle of that, there was a utility pole failure on the property, which caused the pole to go into a structure near the pool and the power line broke loose and draped down over one of our apparatuses,” the fire chief said. “There were no injuries, but we just had to wait for Valley Electric to disconnect the power. And they were there in a very timely manner. It was just one of those things, because the utility pole that broke wasn’t right there, it was further in toward the middle of the property. So no one could foresee that pole was going to fail, but it did.”

Lewis said PVFRS called in their mutual aid agreement with the county as well as several volunteers as back-up in case they needed more responders due to the number of calls the department received for service that evening.

The fire chief said the crews on duty did an excellent job of making sure no one was injured and there were no accidents caused as they rushed to the reports of fire around Pahrump in almost black-out conditions.

“One of the big challenges was facing dust-out conditions,” he said. “As we were driving to the calls with warning devices activated, we literally could not see the road in some cases, usually where there was open desert, the wind was just blowing that loose dust right onto the roadway, which obscured our vision. But we just had to take our time, and again there were no injuries or accidents, so job well done by the crews, especially with having multiple calls in the valley.”