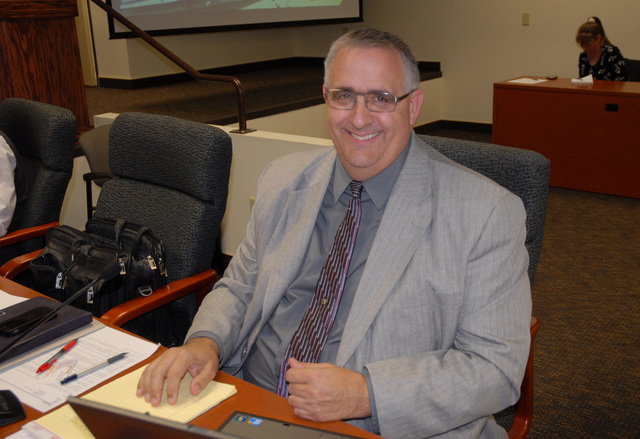 As he runs for a second term, Kunzi already has a Republican opponent, Las Vegas attorney Angela Bellow. But Kunzi said it shouldn’t be a political position.

“The last thing you want is a prosecutor who is doing things for the sake of politics. I can’t imagine a position that needs to be more apolitical than what I do and if the only issue is that I’m a Democrat — or to confuse partisan politics at the Washington level with partisan politics at the local level — I think is a huge mistake. Anybody who actually works with me understands I’m not about the politics,” Kunzi said.

He said Bellow didn’t come to Nye County voluntarily, but was recruited by the local Republican Party to run against him.

Kunzi said his biggest accomplishment during his first term was changing the culture of the DA’s office.

“When I got elected it was this attitude of I needed to clean house and bring my own people in and I was like no, that is not happening,” Kunzi said. “I had a simple request: you do what I ask, meet the standards that I impose and we won’t have any problems and if you’re incapable of doing that I’m not hesitant to make changes and I had to make a few changes. But I think the team I have in place now has created such a phenomenal environment I truly believe the respect for what should be the district attorney’s office has been restored.”

“The stories I heard coming in was this: the attorneys were never in the office and you could never find them, different things like that. Things like that are totally unacceptable. If anybody knows me you’re not going to question the dedication and the amount of hours I put in. There’s nobody in the office that sits there longer than I am,” he said.

One of the issues Kunzi ran on was the lack of action on county legal matters that sat in the DA’s office for months, he said even years. “I have to confess that I’m not particularly happy with how long it takes us sometimes, but it’s actually a good problem from the standpoint that we’re just being overwhelmed by all the requests,” he said.

Despite his apolitical stance, in a veiled reference Kunzi warned at the Democrat’s annual Jefferson-Jackson Dinner in October the Concerned Citizens for a Safe Community need only one more vote on the county commission to form a majority. He derided conspiracies, scandals and general insanity that encroach on his daily work.

Kunzi said, “I really absolutely have zero issues with Commissioner (Frank) Carbone.” He didn’t mention Commissioner Donna Cox, president of the CCSC. “Am I concerned about that agenda? Yes I am, because that agenda doesn’t make this county better. I think it’s a waste of time to do things for window dressing, like trying to order the sheriff to take up armed combat with the federal government to prevent the federal government from taking guns. I haven’t heard of one person in Nye County who’s lost the right to bear arms. You’re not going to find anybody who’s more supportive of gun rights than I am.”

The CCSC circulated five petitions for ballot questions in 2012. While they had enough signatures to qualify as a referendum, Kunzi said they were initiative petitions, seeking to create new laws, which required more signatures.

“Many of those proposals weren’t legal proposals anyway. There’s things the county commissioners have absolutely zero control over,” Kunzi said. “Some of the questions weren’t really appropriate questions to begin with, probably would’ve been subject to a legal challenge whether they were constitutional questions anyway. Those are examples of, let’s not waste our time on things that are not going to improve our quality of life.”

Kunzi was involved in filing suit against Utilities Inc., Corrections Corporation of America and other parties, over the failure of sewer lines on Blagg Road, that closed parts of the major thoroughfare 16 months from December 2010 to April 2012.

“I didn’t tell the county commissioners or anybody not to rebuild the road. I don’t have that authority,” Kunzi said. “Unfortunately when you say preserving evidence, what you have to do is provide the other side an opportunity to come in and do their own testing. We can’t just do our own testing and tell the other side you have to accept that. That’s not the way litigation works. Everything we say is being questioned.”

Kunzi said the DA’s office doesn’t have control over some of the civil cases settled out of court, like a pay out to settle former sheriff’s candidate Ted Holmes’ case.

“Civil lawsuits of this nature are turned over to your insurance company and it’s no different if you’re involved in a motor vehicle accident and you’re sued. You don’t have any control how that case is settled because the insurance company is footing the bill,” Kunzi said.

The DA said he’s proactive when it comes to complaints about entities violating the Open Meetings Law, like an accusation leveled against the Amargosa Valley Town Board a few months ago.

Kunzi admitted the decision to ask the attorney general’s office to prosecute Sheriff Tony DeMeo in November 2012 for overspending his budget $1.2 million was a low point in his first term. Kunzi said he sent numerous e-mails to the sheriff warning him about the budget.

“You can’t overspend your budget. You don’t decide the level of what services you provide, that’s done by the county commissioners through the amount of money they give you,” Kunzi said. “The fact remains, that first year, every county employee took a 4.6 percent cut in their pay through a furlough because the sheriff’s office was over budget and he claimed that his people shouldn’t have to take a furlough.”

The fact county commissioners confronted this in a public manner speaks volumes, he said, even if the AG’s office didn’t prosecute DeMeo on the grounds he didn’t willfully exceed his budget in violation of state law.

A reorganization of conflict attorneys for the public defender’s office has saved the county $500,000 annually, he said.

If he is re-elected, he wants to work hard cutting down the amount of time cases sit in the DA’s office.

“Realistically it oftentimes takes at least two years to get a case to a jury trial from when we file it and sadly that’s not anything I can control. A lot of it is defense delays, that’s something the public doesn’t appreciate a lot of times,” Kunzi said. “One of the ways we can do that is get more cases put up front at the justice court level because that’s where we can really get cases negotiated. If it takes us a year to get a preliminary hearing at justice court, they have no incentive to plead guilty.”

Of course that requires plea bargains in criminal cases. Kunzi said the DA’s office gets over 2,000 referrals per year, it would take 20 years to hold jury trials for all of them.

Some of those negotiations have still resulted in long prison terms for bad people, he said.

Kunzi told Pahrump Rotarians after the 2010 election he wanted to expand the use of community service. He wasn’t able to convince one of the justice of the peace to go along with it. There was a perception the DA was trying to run the courts, Kunzi said.

“People doing these small level crimes, instead of us the taxpayers spending money to house them, giving them three warm meals a day and a place to sleep, I find a better deterrent is to make them come on our terms, work on their days off and perform community service,” he said.