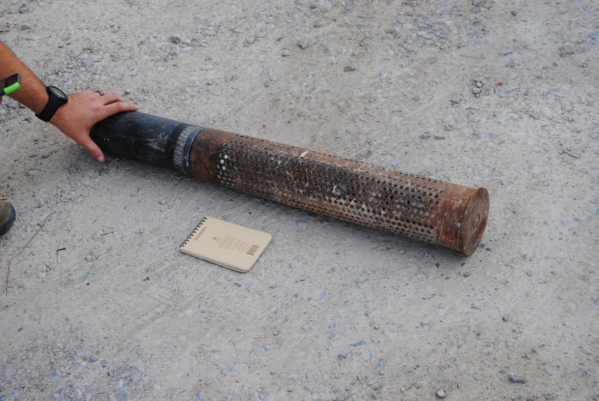 Pahrump and Nye County emergency personnel responded to a potentially explosive situation at a home on the far northwest side town.

Pahrump Valley Fire and Rescue Chief Scott Lewis said his crews were dispatched to a home on the 4000 block Venza St,. off of Bannavitch Street, late Wednesday morning after what appeared to be a military-style ordinance was discovered at the residence.

Lewis said officials from Nellis Air Force Base in Las Vegas were notified about the discovery and were also summoned to the scene.

“We took pictures and sent them over to Nellis Air Force Base officials,” he said. “We created then a safe zone in the immediate area, because at that point we were unsure about whether they were live rounds. There were just certain appearances that gave the impression that they were not, but there was one that caused us enough concern.”

Once Nellis officials arrived, it was determined the devices were in fact, military grade.

“Nellis sent out a group of folks to check them,” he said. “They performed on-scene X-rays and evaluated the equipment closely and they thought the one device in question was a tank round. At the end of the day, they could not tell us with certainty whether it was a live round, so they took it into their possession and removed it from the scene.”

Lewis said the Nellis crews did believe the devices could have been used for military training purposes.

“It was treated and managed as a live round for the entire duration of the initial investigation and they removed them, because they could not make a final determination while they were on scene. They are going to do that in their backyard, versus ours.”

Lewis also said his department has responded to similar calls from time to time in the community.

“We find ordinances from mining operations that some people have accumulated and large amounts of ammunition in general,” he said.