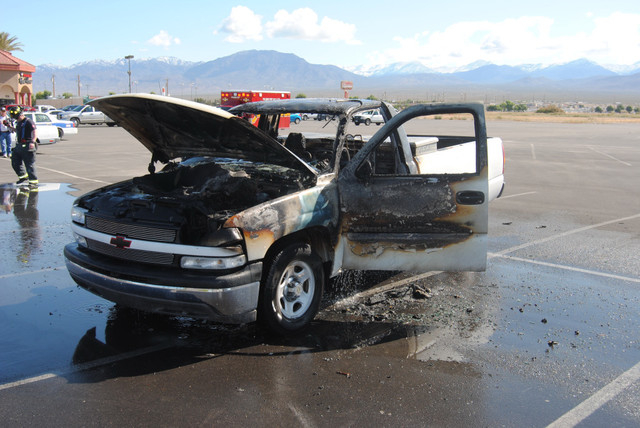 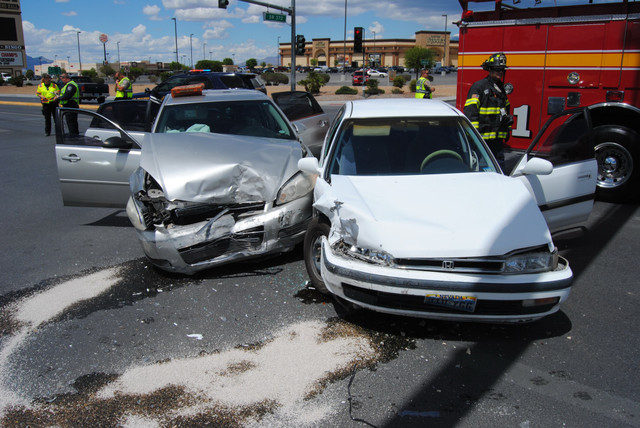 A total of six patients with non-life-threatening injuries were transported to Desert View Hospital following a two-vehicle collision at the intersection of Highways 160 and 372 early Sunday afternoon.

NHP is investigating the cause of the high-impact, offset head-on collision which entrapped at least one patient.

Traffic was diverted away from the scene as crews and NHP officials worked to remove debris off the roadway.

“The fire was fully involved and extending to the passenger compartment of the pickup truck,” he said. “There were no immediate exposure vehicles or structures because the driver had pulled away from that particular area.”

Lewis said the initial cause of the fire appeared mechanical in nature. It was extinguished without incident.

Though the sole occupant complained of minor injuries, they declined transport the hospital.

Fire crews responded to a two-vehicle collision at the intersection of Homestead Road and Thousandaire Boulevard on the south end of town.

Lewis said the impact of the collision caused major damage to both vehicles.

“Upon arrival, crews found a T-bone type collision,” he said. “The investigation and scene size-up revealed one person was mechanically entrapped. Fire crews completed a passenger-side door removal. Mercy Air was unavailable at the time and therefore the patients were transported to Desert View Hospital.”

“Upon arrival we found a one-story single-family dwelling with smoke showing from the rear,” he said. “The windows were broken out on the back side of the house and crews saw smoke conditions emanating from those windows.”

Lewis said the fire crew attacked the fire through the front door where it was quickly extinguished.

“They found a room and contents fire and due to the interior condition of the residence, and the nature of the fire discovered, a deputy state fire marshal was summoned. It is also under investigation by the Nye County Sheriff’s Office. The fire is suspect in nature.”

On Monday, fire crews responded to the Nye County Detention Center after a fire alarm was activated just after 10 a.m.

“Upon arrival, crews found an alarm activation with water flow in the populated area of the detention center,” Lewis said. “Fire crews surmised that an inmate broke the sprinkler head, allowing the flow of water. Crews controlled the water flow and the system was repaired and put back in service.”

Lewis also said the activation created a literal deluge of water inside the facility.

“There was a large amount of water that was flowing during that incident,” he said. “Considering the nature of the construction of that building, there wasn’t a lot of water damage even though there was a lot of water flowing throughout that area. The inmates were displaced to other secure areas while cleanup occurred.”