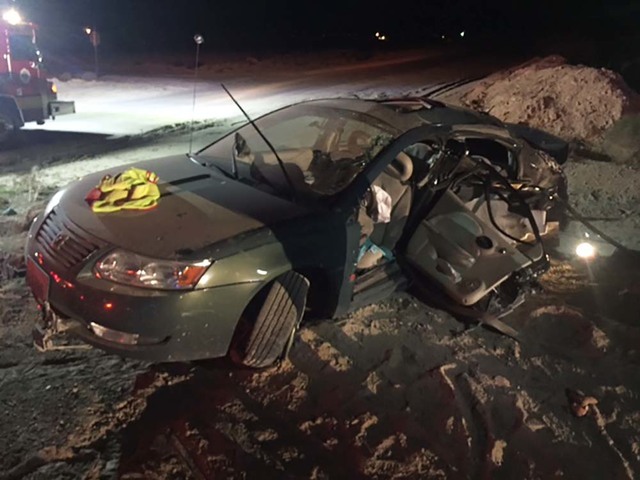 One person was transported by ground to Desert View Hospital and later flown to UMC Trauma in Las Vegas with critical injuries following a two-vehicle collision at the intersection of Bell Vista Avenue and Highway 160 early Saturday evening. The T-bone collision mechanically entrapped the patient inside the vehicle, forcing a door removal by first responders. Special to Pahrump Valley Times 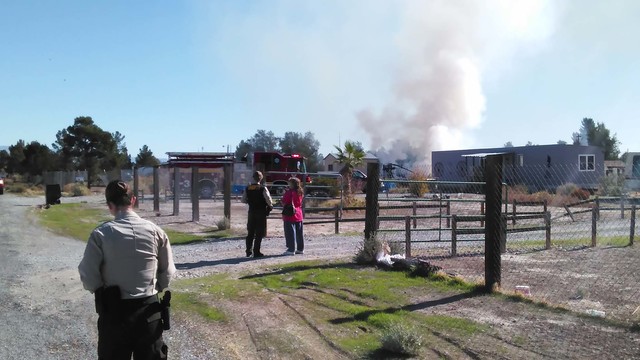 One person was transported to Desert View Hospital after a travel-trailer fire on Dollar Street just after 10 a.m. on Monday, Nov. 14. Fire crews had the fire under control within minutes. The initial investigation revealed the cause of the fire was accidental. Selwyn Harris/Pahrump Valley Times 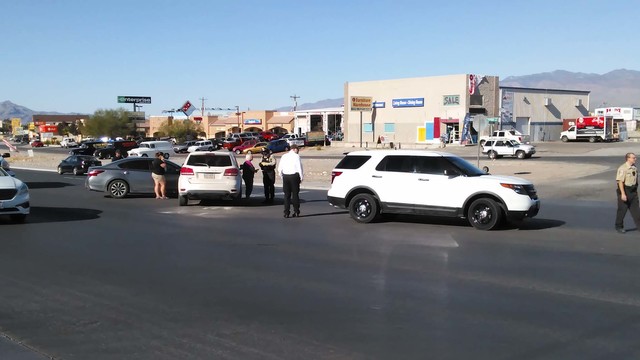 Northbound traffic on Highway 160 was squeezed down to one lane following a two-vehicle T-bone type collision at the intersection of Wilson Road on Wednesday, Nov. 9. Pahrump fire crews evaluated one female patient following the crash, which completely shut down southbound traffic until crews cleared the scene. NHP cited one driver for failure to yield at the intersection. Selwyn Harris / Pahrump Valley Times

Area first responders were greeted with several motor vehicle collisions and structure fires throughout the weekend, into the beginning of this week.

“Upon arrival, we found an accessory outbuilding that had a fire within the exterior walls,” he said. “The fire was quickly contained without any extensions to nearby exposures and there were no injuries reported. That fire is under investigation, but it appears to be accidental in nature.”

The following day, northbound traffic on Highway 160 was squeezed down to one lane following a two-vehicle T-bone type collision at the intersection of Wilson Road.

Pahrump fire crews evaluated one female patient following the crash which completely shut down southbound traffic until crews cleared the scene. NHP cited one driver for failure to yield at the intersection.

On Friday, Nov. 11, fire crews were summoned to the intersection of Pahrump Valley Boulevard just south of Bourbon Street for a two-vehicle crash just after 9:30 a.m.

“Upon arrival, we found a vehicle that had left the roadway and struck a parked car in a residential driveway,” Lewis said. “Only one of the vehicles was occupied and that person was subsequently treated and transported to the local hospital.”

On Saturday, one person was transported to Desert View Hospital following a two-vehicle crash at Highway 160 and Bell Vista Avenue just before 5:30 p.m.

“Upon arrival, we found a T-bone type collision where one person was mechanically trapped with critical injuries,” Lewis said. “Crews ascertained the status of both Pahrump helicopters; however they were both on separate missions. The patient was subsequently transported by ground to Desert View Hospital, and it is my understanding that patient was later flown to UMC Trauma in Las Vegas.”

Roughly a half hour later, fire crews were dispatched to the intersection of Wilson Road and Lola Lane for another two-vehicle collision where one person was treated and transported a short distance to Desert View Hospital.

On Sunday, the intersection of Calvada Boulevard and Dandelion Street was the scene of a two-vehicle collision at 11:45 a.m.

“Upon arrival, we found a two-vehicle accident with one vehicle impacting the rear of the other,” Lewis said. “There was no mechanical entrapment. However, one person was treated and transported to the local hospital.”

On Monday, Nov. 14, fire crews responded to a report of a structure fire on Dollar Street just after 10 a.m.

“Upon arrival, we found a well-involved travel trailer which was used as a fixed residence,” Lewis said. “There was an exposure structure that was protected early on and the fire was quickly controlled. There was one injury to the sole occupant of the structure who presented themselves at the command post shortly after our arrival. He was treated and transported to the local hospital. The fire is thought to be accidental in nature.”

Also on Monday, one person was transported to the hospital following a two-vehicle collision on Highway 160 and Wilson Road just before 3 p.m.

“Upon arrival, we found a two-vehicle accident with significant damage to both vehicles,” Lewis said. “It was a T-bone type collision and scene assessment revealed that we had one person mechanically entrapped. Engine One went into service and performed a driver’s-side door pop. The patient was extricated and transported to the local hospital.”