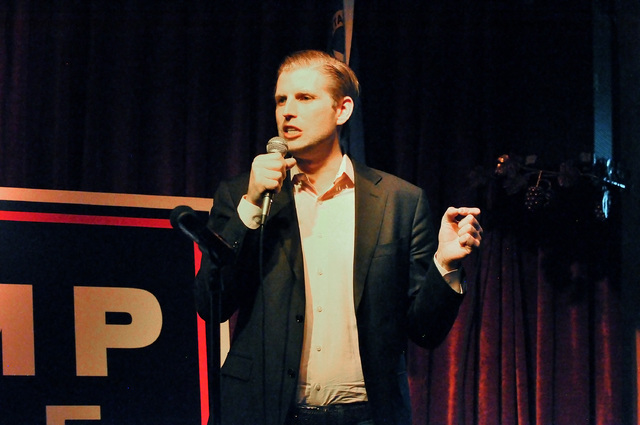 Eric Trump, son of Republican presidential candidate Donald Trump, encouraged everyone to get out and vote because Nevada is “crucially important,” at a rally in town Friday.

In his 15-minute speech at the building which formerly housed Tommasino’s restaurant on Humahuaca Street, Eric Trump criticized the government’s handling of the national debt, U.S. military, VA system and the Iran nuclear deal. He sought to portray his father as an alternative to establishment politicians and said Donald Trump will do “a tremendous job” as the next president.

“You know, it’s amazing. We look at the problems that we have as a nation, they are so great, and our politicians have done such a terrible job, which is really the only reason my father’s running,” he told the crowd at the former Tommasino’s restaurant. “I can tell you implicitly that if we didn’t have problems as a nation, he wouldn’t be doing this, he wouldn’t need to do this, and this is his way of giving back to the country that’s given our family absolutely everything.”

Nevada is among a number of battleground states being contested in the General Election. However, a recent Las Vegas Review-Journal poll showed Hillary Clinton, the Democratic presidential nominee, with a 7-point lead over Donald Trump, 48 percent to 41 percent.

Eric Trump said the country is “leaving behind” the next generation of Americans.

“Look at what we have, we have $20 trillion worth of debt. Our debt’s gone up by $11 trillion under President Obama, that’s enough to repay all student debt in this country six times over,” he said.

He also decried the suicide rate among veterans and said that’s happening because VA “is doing a terrible, terrible job.”

Eric Trump went on to criticize the $150 billion Iran nuclear deal. He said the money would be better used for veterans and the school system in the U.S.

He said the U.S. military has “the lowest level of readiness in modern history.”

Eric Trump called the Trump family “the biggest Second Amendment family,” and drew a large round of applause when he referred to an audience member that had a gun.

“I see you are carrying a gun over there on your hip and we could not be more proud of that,” he said.

“This country needs somebody who’s going to be honest, that won’t lie to the people, that will fix the problems that won’t necessarily always be perfectly politically correct, that will call people out and hold people accountable within our government, and guys, he will do a tremendous, tremendous job,” he said.

Donald Trump is scheduled to visit the Venetian in Las Vegas on Sunday.