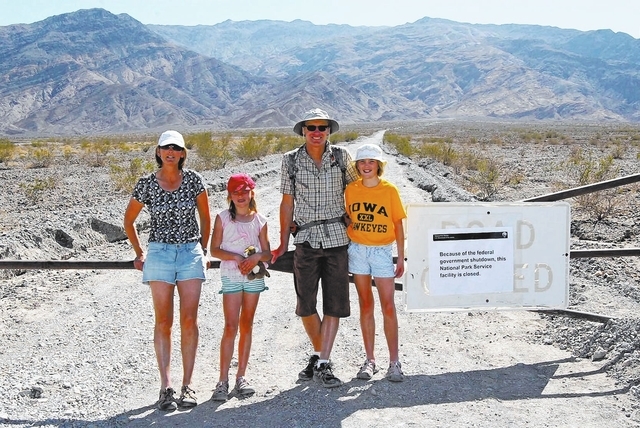 The parking lot was still fairly full on Highway 160 at Boothill Lane in Pahrump, which is traditionally used by workers boarding the bus to the Nevada National Security Site.

The federal employees have been informed their jobs are safe — at least for the next two weeks.

Employees for National Security Technologies LLC said workers at Area 51, the Tonopah Test Range and Creech Air Force Base have already been furloughed, with the federal government shutdown that began Tuesday.

“I don’t know where they’re getting their information from, I’ve not heard that information,” said Darwin Morgan, spokesman for the Nevada National Security Site. Morgan wouldn’t elaborate on a future shutdown at the NNSS, but he added, “all I can say is we’re currently open.”

Tour buses headed from Las Vegas to Death Valley National Park continued to pull into the Albertson’s supermarket parking lot in Pahrump this week. Two buses were parked there about 10 a.m. Thursday, as one left, another tour bus pulled in.

“We were supposed to visit 10 national parks, unfortunately Zion and Death Valley and Sequoia are closed now. So it will not be possible to view them, so we are a little bit sad but we deal with it,” said Patrick Bosc, a French tourist from Brittany stepping off a tour bus at Albertson’s supermarket.

“Death Valley is not closed. We see that it’s possible to go through. But for Sequoia we see there’s no chance,” he said.

When asked for his opinion about the shutdown, Bosc said, “I don’t know enough about the way things are doing in the U.S. so I cannot understand what happens. I just understand the issues and the final things. But okay, it’s a pity anyway, but in France we have very often strikes so we are not very well placed to give advice to the U.S.”

The Martin Family from New Zealand visited Stovepipe Wells in Death Valley Thursday. Andrew Martin, the family’s patriarch, said that when they were visiting the Mesquite Sand Dunes earlier in the day their youngest daughter needed to use the restroom, but they were closed.

“She was most indignant,” he said.

Many visitors with long-planned visits to the park, were not totally deterred by the barriers. At least one couple went around the barrier and braved the road to the Race Track — even taking on the difficult road in a sedan. The Martin Family hiked the extra 2.3 miles to Mosaic Canyon, but were worried they might be in trouble if it were known.

Besides the visitors center, the notice advises visitors the hotel, store, restaurant and gas station run by Death Valley Lodging Company at Stovepipe Wells is closed. Scotty’s Castle is closed, park campgrounds, the back country and some roads, like the Badwater Road. Highway 190, which runs through the park, the largest national park in the lower 48 states, is a state highway and is still open, permitting tourists to still view many of the attractions. The Beatty cutoff and the road to Scotty’s Castle is open.

Park Superintendent Kathy Billings said visitors in overnight campgrounds and national park concessions lodging were given until 6 p.m. Thursday night to leave. Park special events like the Star Party scheduled this weekend have been cancelled.

Rich Jones, a regional general manager for Death Valley concessionaire Xanterra Parks and Resorts, said facilities at Furnace Creek are open. That includes the Furnace Creek golf course, the 224-room Furnace Creek Ranch motel, the 49er Cafe, the swimming pool and the airport. The historic Furnace Creek Inn with 66 rooms will open for the season Oct. 11.

“The resort is operating; the sad news is that all the roads to the various sightseeing attractions are closed,” Jones said.

The turnoff at Zabriskie Point is a short road that remains open, he said. The stables will open when the inn opens for the season, but they will be operating on a limited basis.

“Our hope is the shutdown ends quickly. We’re just saddened by all the plans by people who plan once in a lifetime visits to the national parks. It’s sad. But we certainly keep a positive outlook the closure will end soon,” Jones said. “We certainly have been getting a lot of calls, people just confirming that we are open and asking about the status of some of the things they wanted to see.”

Superintendent Billings said Death Valley hosts an average of 4,000 visitors each day in October. She said the park will lose an estimated $4,500 in entrance fees each day of the shutdown and an estimated $3,000 in other fees. In addition, 88 park employees are on furlough and another 72 concessions employees. Seventeen park employees remain on duty providing security and emergency services.

The Las Vegas Review-Journal reported climbers were being kept out of the scenic drive at Red Rock Canyon National Conservation Area, but vistas of Red Rock Canyon and popular hiking trails could still be accessed on Highway 159. Lake Mead National Recreation Area spokesman Christie Vanover told the newspaper campgrounds at Lake Mead and Lake Mohave are being cleared; Lake Mead Cruises was even laying off workers.

Ramu Komanduri, chief of staff for the Veterans Administration Southern Nevada Health System, said, “the clinic is functioning without interruption. The shutdown has not impacted us.”

The Veterans Benefits Administration Education Call Center, inspector general hotline, consumer affairs home page and congressional liaison veterans queries will be suspended. No decisions on claims appeals or motions will be issued by the Board of Veterans Appeals. VA web sites will be updated intermittently. The VBA will not be able to continue paying overtime for claims processors. Vocational rehabilitation and education counseling will be limited.

About 1,100 civilian employees were furloughed at Nellis Air Force Base. The base library closed and it was uncertain whether the base hospital, exchange store and other services would be affected.

Approximately 891 of the 927 employees for the BLM in Nevada are furloughed, according to BLM Deputy Chief of Communication Jo Lynn Worley. All BLM services are suspended, with the exception of law enforcement and emergency response functions. Approximately 4,000 BLM recreational facilities nationwide, including visitors centers, facilities, campgrounds, boat ramps and other recreation sites are closed. The government shutdown halted the issuing of new oil and gas leases by the BLM, mineral leases, non-emergency abandoned mine and hazardous materials mitigation, permits for renewable energy, Endangered Species Act and cultural clearances, range management restoration, wild horse and burro adoptions, sand and gravel permits as well as timber sales.

Darrell Lacy, Nye County interim community development director, said the revision of resource management plans for the Las Vegas BLM district, which are a guide for BLM operations on everything from mineral exploration to wild horses on public lands, are being put on hold. He received a message when the federal government gets back to business the BLM will reschedule meetings with local officials to work on the plan.

“We can’t get a hold of anybody over there,” Lacy said. But he isn’t worried about the timeframe. “Deadlines were from their perspective, not ours. They’ll have to sit back and re-evaluate this when the time comes.”

“Most of the biologists and the folks that we deal with in the meetings, most of them are on furlough right now,” he said.

The wild horse advocate group, Protect Mustangs, criticized the BLM and said the government shutdown is putting 50,000 captive wild horses at risk who are corralled in federally-funded holding facilities.