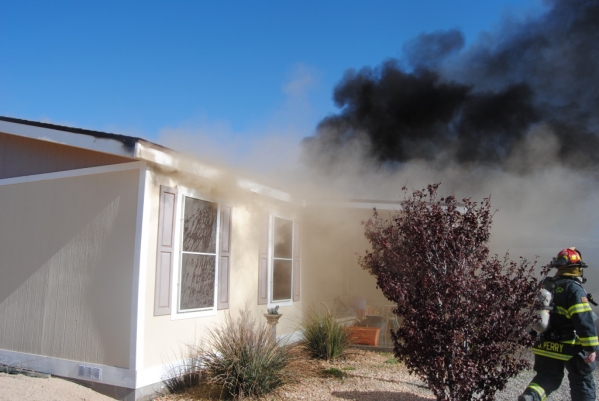 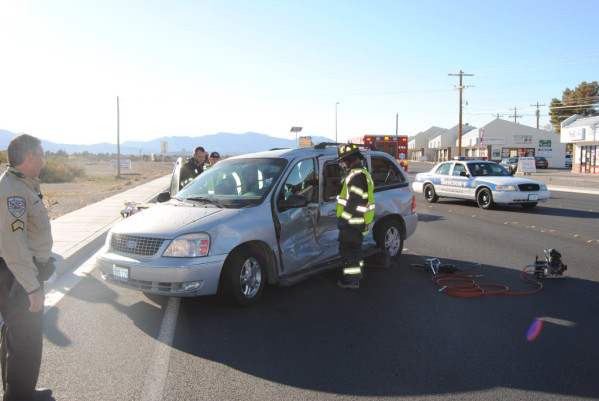 On Thanksgiving, Pahrump Valley Fire and Rescue was dispatched to a residence located at 4610 W. Horn St. for a structure fire. Upon arrival, firefighters found smoke and fire showing through the roof and they began to suppress the fire.

During their operation, the fire department was notified that the blaze was likely an intentional act, with the occupant of the residence possibly starting the fire trying to hurt herself. The person was in the custody of the Nye County Sheriff’s Office and being transported to Desert View Hospital.

The investigation into the fire is ongoing, but it appears to be an intentional act and the condition of the woman is unknown. The fire caused significant fire damage and moderate smoke damage throughout the house. The fire department placed the damage at around 50 percent of the structure. All nearby exposures were protected during the firefighters’ efforts, allowing no extension of the fire.

On Saturday around 2 p.m., firefighters responded to a two-vehicle accident on Highway 372 near Pahrump Valley Boulevard.

When firefighters arrived on scene they discovered that one of the passengers involved in the accident was trapped in the vehicle and the fire crew extricated the person by removing the driver’s side door.

Mercy Air was unavailable at the time so the passenger was transported to Desert View Hospital.

As firefighters were wrapping up their work at the accident on Highway 372, Pahrump Valley Fire and Rescue received another call about a structure fire at 250 N. Union Pacific Street.

Fire crews initiated an aggressive interior attack and found the structure to be unoccupied at the time of the fire and was extinguished. Despite the several nearby exposures, firefighters contained the blaze to the single structure.

The initial investigation revealed the fire was likely an accidental incident relating to an electrical issue.

On Friday firefighters were dispatched to a single-vehicle fire on Blagg Road and Irene, where they found a vehicle on the side of the road. The fire was quickly extinguished and no injuries resulted from the blaze.

Fire crews were able to contain the fire to the vehicle. Initial reports point to mechanical failure for the cause of the incident.