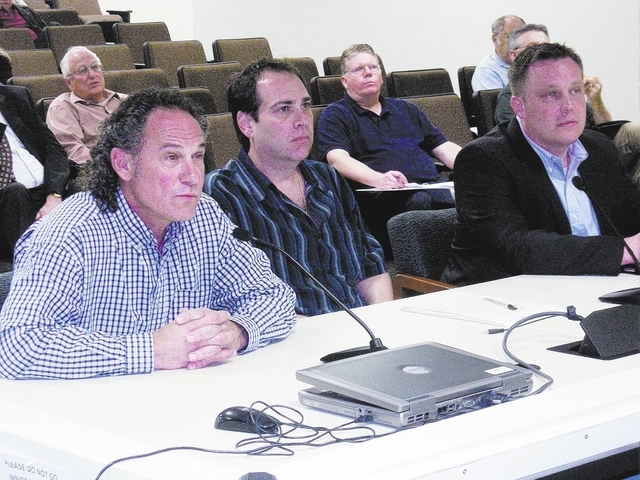 Fireworks store owners persuaded Nye County commissioners Tuesday to keep a limit of six licenses, in a new fireworks ordinance that was passed 3-2 over the objections of free market advocates Frank Carbone and Donna Cox.

Consequently, because the limit wasn’t lifted, the bill also keeps the annual license fee of $1,000 for fireworks store owners instead of reducing it to $500. But it enacts other changes District Attorney Brian Kunzi said store owners support, like a prohibition on tents, stands or temporary structures to sell fireworks and a definition of “safe and sane” fireworks that could be set off year round on a person’s own property.

Casey Steinhart, representing Area 51 Fireworks, said some store owners came into Pahrump years ago with a certain set of guidelines and rules how they were to be governed. During that time, they put quite a bit of money into those businesses, he said.

“Our only real problem with the changes is it changes the game in the middle of the game, it changes the whole rules and regulations,” Steinhart said. “This change on the limitation is obviously going to negatively impact us at a time when we’re all trying to work together and make it better.”

The ordinance was written to make it a crime to discharge fireworks in a manner that may endanger a person or structure, in case someone sets off a brush fire.

Dan Peart, representing Phantom Fireworks, said his company operates many stores in many states throughout the country. He said the Pahrump market was a new market, not a mature market.

He suggested creating a fireworks advisory board, including store owners, to hash out the issues before they come to the county commission level.

Kunzi said the county should keep limits on fireworks licenses or eliminate sales of fireworks altogether.

“When this first went into place, this was the Wild West. Fireworks, there were no controls over it,” Kunzi said.

But Steinhart responded, “you’re making it a free market after we put quite a bit of investment and I don’t think that’s fair.”

Steinhart said fireworks businesses pick areas based on factors like the number of licenses, the population base and what states are nearby.

Cox backed up Carbone, “I thoroughly believe in free enterprise. I’ve been in business, I understand both sides. Competition is good. It controls pricing. I don’t want to see a monopoly.”