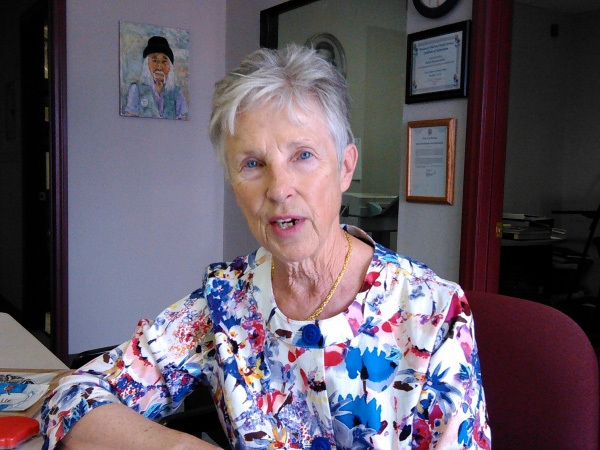 Selwyn Harris / Pahrump Valley Times Pahrump Arts Council President Loretta Lindell urges the community to attend a Pahrump Town Arts Meeting on Tuesday, October 4, at the Pahrump Community Library beginning at 6 p.m. The meeting, part of a statewide series is designed to gauge the level of interest in the arts within urban and rural communities. The library is located at 701 East St.

What does a community rich in art and culture look like?

That’s the question officials at the Nevada Arts Council want to find out.

The organization is partnering with the Pahrump Arts Council (PAC) to hold a series of public arts town meetings around the state to assess the “State of the Arts” in various communities around the Silver State.

Locally, a Pahrump Arts Town Meeting is scheduled for Tuesday, October 4, at the Pahrump Community Library at 701 East St. from 6 p.m. to 7:30 p.m.

“The Nevada Arts Council is conducting a series of conversations around the state,” she said. “They have posted a number of meetings in some of the larger cities in town, but they are also concentrating on the rural areas at the moment and that definitely includes us.”

Chartered in 1993, PAC was established to create an environment for the arts to flourish in the community.

Lindell noted that a rural town such as Pahrump has many accomplished artists.

“There is an amazing amount of art that is available and there are very talented people out here,” she said. “I will use the fall festival as an example and the number of entries that were entered in the arts and crafts portion of that event.”

Lindell also said the arts meeting can help gauge the level of interest of the arts within the community.

For many years, efforts to establish a performing arts center have not panned out in Pahrump.

Lindell suggested a community teeming with culture would likely have something akin to such a facility.

“An ideal community would have an arts center or a performing arts center,” she said. “It would be a place where people can come together to create art and talk about art. That would be the ideal setting. But if course that does not exist in Pahrump, but it has been a goal for us for many years.”

Additionally, Lindell said communicating the need for an arts facility in Pahrump is crucial.

“Part of the problem is just getting the word out,” she said. “It still amazes me that there are people I will meet who didn’t know there is a Pahrump Arts Council here in town and they have lived here for five or 10 years. It’s a difficult process sometimes. The public forum on Tuesday is designed to really start the conversation about the arts in each community. They gather all of this information from around our state and compile it.”

“We have had a wonderful relationship with the school district over the years,” she said. “Unfortunately, when it comes down to cutting costs, often it’s the arts programs that are cut first. We as an arts council need to do our best to provide arts education opportunities that supplement what’s going on in school.”

Tuesday’s meeting aside, Lindell said PAC is looking forward to the return of a performing arts troupe later this fall.

“We have been able to bring in programs such as the Missoula Children’s Theater, which by the way will be coming into town a week after Thanksgiving,” she said. “We have had them here at least a dozen times or more. All students can participate and come see the program, which is one way for us to introduce the performing arts to students and get them involved in that.”

For those who cannot attend the arts town meeting, a Values and Vision public survey is available in English and Spanish at nac.nevadaculture.org, or call 775 687-7119.