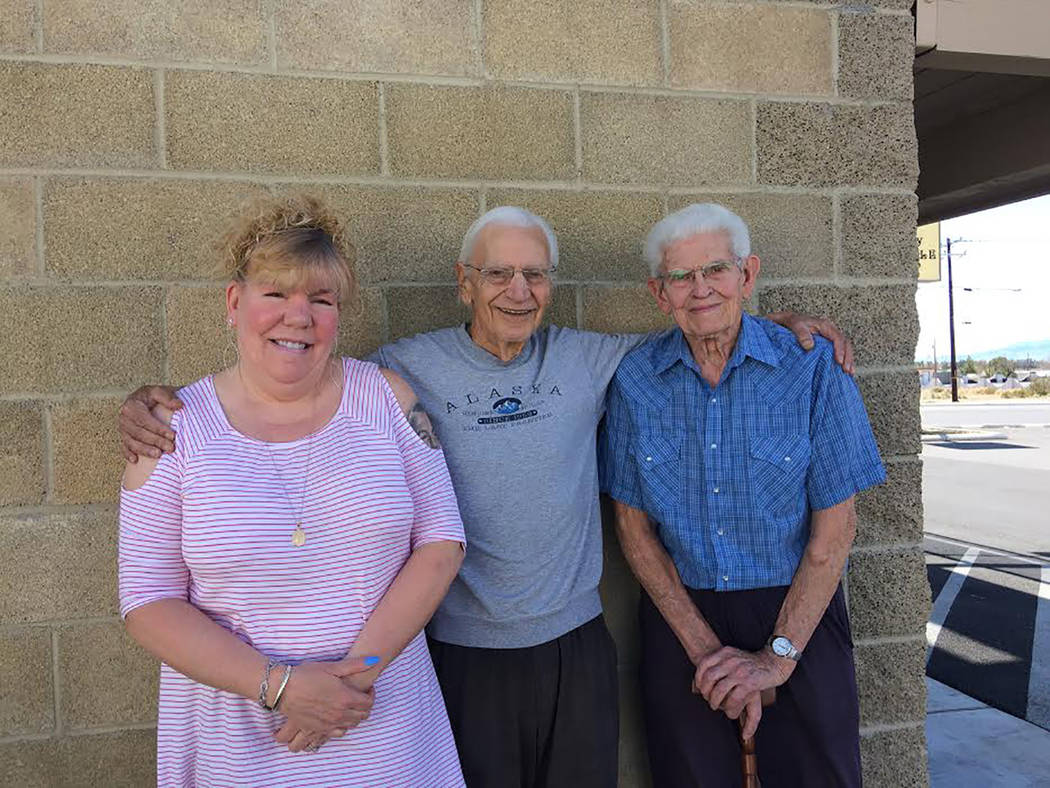 Robin Hebrock/Pahrump Valley Times From left to right are GriefShare facilitators Roberta Purves and Pete Giordano as well as GriefShare official greeter Dan Schmidt. Despite suffering personal losses, all three said the program had helped them find joy in life again and they can smile with genuine happiness. 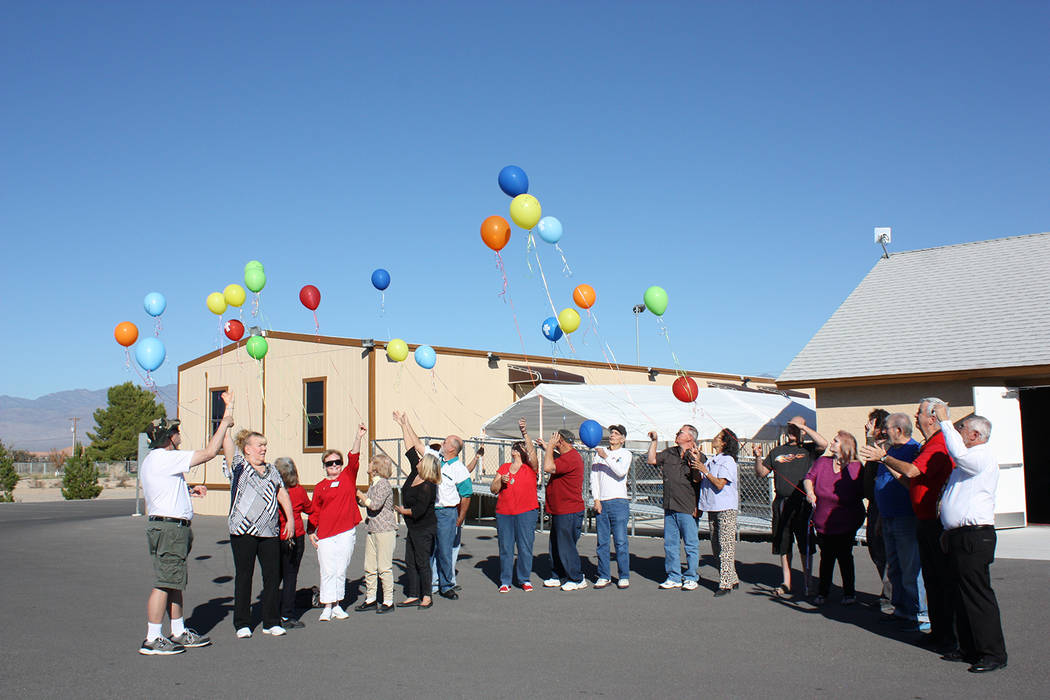 Special to the Pahrump Valley Times Taken in November, 2016, this photo shows a group of GriefShare members celebrating the final meeting of that 13-week course with a balloon release.

Life is filled with experiences that shape a person and one of the most harsh and tragic experiences of all is the death of a loved one.

Those who lose someone they care deeply about are never the same again.

In some cases, with time, the person is able to move forward on their own. With others, however, the grief can become overwhelming, consuming their lives.

When immersed in the depths of mourning, there is still hope, and locally, Pahrump Valley residents can turn to the group GriefShare.

GriefShare is a non-denominational, multi-faceted program that spans the country. While able to be termed as a “support group,” GriefShare is described as so much more by its members. Heading into its fourth year, the Pahrump chapter has successfully aided dozens of participants on their journey from mourning to joy, giving them the tools they needed to move on and enjoy their lives again.

“We are starting our fourth year here and we have helped approximately 50 people move on with their lives and find happiness again,” Pahrump GriefShare organizer Pete Giordano explained. Giordano, who brought the program to the valley after having benefited from a Henderson chapter of it following the passing of his wife, said his goal was to give people the same peace and comfort he experienced through the group.

“I remember when we started I said, ‘If we only help one person, that would be amazing.’ But to know that we have helped 50 people,” Giordano’s voice choked off for a moment as he considered the impact that GriefShare has had on the community.

GriefShare is comprised of a 13-week program of meetings and each gathering has its own focus, making all 13 “self-contained.”

This means residents can join GriefShare at any point during the 13-week course. The program includes three distinct portions at each meeting, a video segment, the traditional group discussion and what many GriefShare participants reported to be a key feature, a workbook that helps those grieving get their feelings out and onto paper.

“Everyone in the videos, including the grief counselors and the participants, they have all lost loved ones,” Giordano said. “The people we hear talking on these videos have been there and they truly understand where you are. And those workbooks are so important, they can help so much.” As for the group discussion, Giordano remarked that participants do not necessarily have to speak, they can benefit from simply listening to others share their stories.

“When you lose someone, you think of yourself, you get lost in yourself. Then you go to these meetings and you realize you are not alone,” Giordano said.

GriefShare facilitator Roberta Purves agreed, noting, “They can relate. They know this pain.”

Purves and Dan Schmidt are GriefShare alumni, who have participated in the 13-week course multiple times and are now active as staff.

“Roberta is doing so much better and she is now facilitating because she wants to help other people,” Giordano stated. “And Dan here, when he first called me, he could hardly speak for crying and now he is part of the staff. He’s our official greeter.”

Schmidt smiled and said with a chuckle and wink, “Yes, it’s lots of hugging and kissing.”

Both Purves and Schmidt related their experiences with grief, Roberta having lost her son and Dan his wife, among others. For Schmidt, he said the group had become an integral part of his life.

“I found a family. I’ll be 83 in a couple of weeks and at 83, you lose everybody,” Schmidt said. “I have lost brothers, sisters, mothers, fathers, in-laws, my wife. And I am by myself. I found a family. Just having those people in my life, knowing they care about me and want to know I am doing good, it’s very rewarding to me.”

Schmidt detailed that when he first started GriefShare, he couldn’t speak about his wife’s passing. Although things are not perfect, he said he is much better now. “I do have bad days, yes, but I do have a lot of good days too. It’s been very beneficial for me and I am the type of person who wants to pay it forward,” he stated.

For Purves, she said it was the instant connection she felt with the other participants and with the facilitators that made her want to continue with the program.

“When my son died, I shut off, I completely shut down,” Purves explained. “For three months I walked around not really knowing what I was doing, kept my robe on, wouldn’t bathe.”

She said it was her mother’s encouragement that prompted her to go and once she did, it was a change for the better.

“When I came to the door, I was just broken. But Pete here opened the door and greeted me. It was like being pulled out of the dark,” Purves said. “Pete and I had an instant connection because we had both lost our sons and it turned out that others there had lost their sons, and their wives and husbands and mothers. So I decided to keep coming and it helped me a lot, immediately.”

Despite her initial success with the program, Purves said at one point she, “got into my sorrow” and stopped attending. That was when the close-knit aspect of the group kicked in, with the members calling her to check on her and encourage her to join them again. “This group really cares, we all care.”

All three also noted that GriefShare is for anyone who has lost a loved one and is struggling to deal with the painful aftermath. “That’s the wonderful thing about GriefShare, it doesn’t have to be fresh,” Purves said. “It could have been two weeks, two years or 10 years, it doesn’t matter. If you are having a hard time just come. Just come and share.”