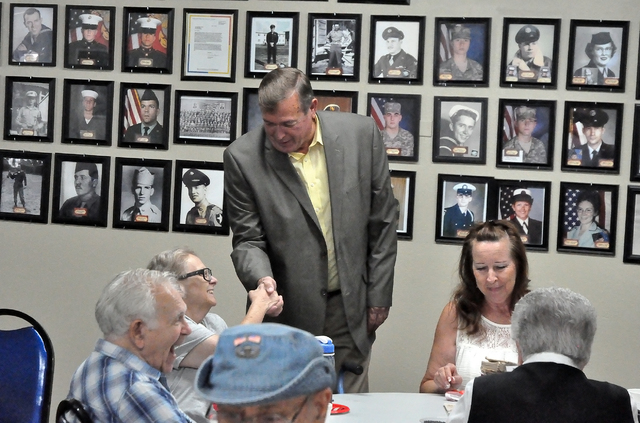 Cresent Hardy sought to highlight his stance on various issues in Nevadas 4th Congressional District during his general campaign kick-off event in Pahrump on Saturday.

Hardy arrived at the Pahrump Senior Center just prior to the beginning of the event in the early morning and shook hands with multiple supporters in the room. Flanking him were his wife Peri Hardy and Nevada District 36 Assemblyman James Oscarson.

Hardy of Mesquite is seeking his second term. He beat his in-party challenger Mike Monroe in the June 14 primary election and is now gearing up for the general election where he will square off against Democrat Ruben Kihuen.

The kick off of Hardys general election campaign in Pahrump came shortly after his historic stop in Goldfield. Hardy was the first state representative to visit the remote corner of Nevadas 4th Congressional District in Esmeralda County.

Hardy launched into his speech by saying that he supports Reagans three-legged stool.

Hardy said representing people in Nevadas 4th Congressional District is a great privilege in his life.

This was not an aspiration for me to be a representative of Congress, Hardy said. I actually believe that the best work that we can do is in our own communities, in our own counties and our own state. Federal government is a place that takes too many privileges upon itself.

He described himself as a constitutional conservative at heart, and said he believes in a limited, efficient government.

Hardy also spoke about his accomplishments in Congress during his 17-month tenure, such as a balanced budget amendment, a bipartisan rural health act that aims to protect rural hospitals and his role in the expansion of the VA clinic in Pahrump.

On Nov. 8, Hardy will compete against Kihuen, a Nevada senator who emerged as a winner from the pool of eight Democrats in the primary election. Kihuen received blessings from outgoing Nevada Senator Harry Reid, former President Bill Clinton and the Culinary Union that has close to 60,000 workers in Clark County.

During his speech, Hardy took aim at his Democratic opponent, saying that Kihuen was opposed to the rural health act and any types of actions that will help to bring Nevadas land back.

Hardys bipartisan rural health act aims to support existing rural hospitals through State Offices of Rural Health (SORH) and incentivize construction of new facilities for communities in need, according to his offices statement released in April.

I strongly support increasing quality and access to rural hospitals, Kihuen said in a statement. Congressman Hardys bill is a first step but ultimately only authorizes Congress to fund rural hospital construction without actually funding any construction. Hardy is playing a trick so he can say he supports rural hospitals in glossy mailers this fall knowing his Tea Party friends on the appropriations committee will kill any increase in funding.

In a statement, Kihuens campaign said that he strongly supports protection for Nevadas public lands and believes Congressman Hardys opposition to common-sense land protection is outrageous.

Hardy won in 2014 with 48.53 percent of the vote to then incumbent Steven Horsfords 45.76 percent. Democrats have a voter registration advantage with 42.8 percent to 36.6 percent Republicans through the end of May, according to Nevada Secretary of State figures.