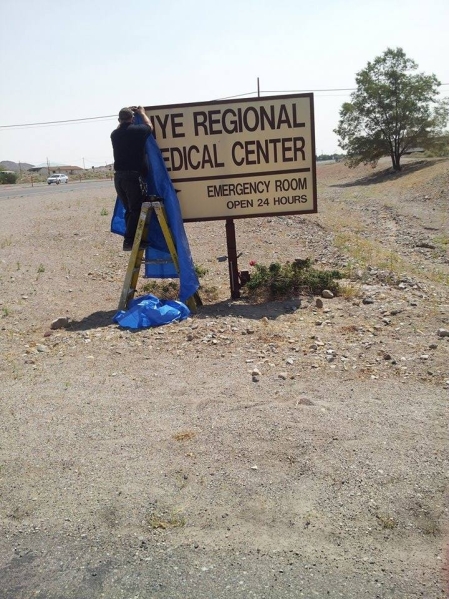 TONOPAH – Officials are trying to work out temporary and long-term solutions after the Nye Regional Medical Center in Tonopah was closed last week due to a grim financial situation.

However, Allen cautioned the process may not provide a quick solution.

“Our intent is not to mislead or to give false hope to the people of northern Nye and Esmeralda counties,” Allen said. “These discussions require due diligences by all of the parties involved in making sure that the right health care model is established in our community. Our goal is to provide long-term and sustainable health care for our communities.”

Last week’s announcement of the closing by Allen sent shockwaves throughout the 100-mile radius of the northern part of the county that is now left without a hospital. To address the issue, the Nye County Emergency Management office has developed an emergency response plan for the communities affected by the closure.

Nye County Emergency Manager Vance Payne said in a press release that the county’s Emergency Management worked out transportation agreements with service providers in neighboring counties and states to accommodate the daily traffic that was previously served by the now-shuttered hospital.

“Our number one priority is to ensure the long-term safety to the residents of this community,” Payne said in a press release. “To support this initiative, we have implemented the most efficient and effective plan to reach that goal. I would like to express my gratitude and personally thank everyone involved with supporting this plan.”

Emergency medical services, emergency medical technicians and air and ground ambulance services will also provide support to the community affected by the closure, according to the press release.

Following the center’s closure on Friday, Aug. 21, the outpatient clinic will close on Sept. 4. All acute care patient services within the hospital, including the emergency department, inpatient care, laboratory, radiology, respiratory and outpatient therapies will also cease operations. Earlier attempts to save the hospital included the county loaning the struggling facility $2 million in additional funding and arranging partnerships with other health care organizations, which proved unsuccessful due to the hospital’s small size and remote location.

State and federal officials are trying to see if there could be other solutions.

To mitigate some of the impact of the NRMC closure, Payne said the NCEM had executed several procedures that include Lifeguard Air Ambulance, establishing agreements with neighboring Nevada counties and Inyo County in California.

Meanwhile, State Rep. Pete Goicoechea said the lack of the state law that requires a county hospital could present a challenge to future efforts to alleviate the situation.

“I don’t believe the state would interfere,” he said. “It would take an emergency situation and it would be state resources.”

“The county is doing a pretty good job stepping up making sure those folks receive good care,” he said.

However, Oscarson said more resources could be available if the county shows the need.

“There’s certain things in local entities that they can handle, but we can be a resource,” he said. “If there’s more help that’s needed, we certainly can have that discussion.”