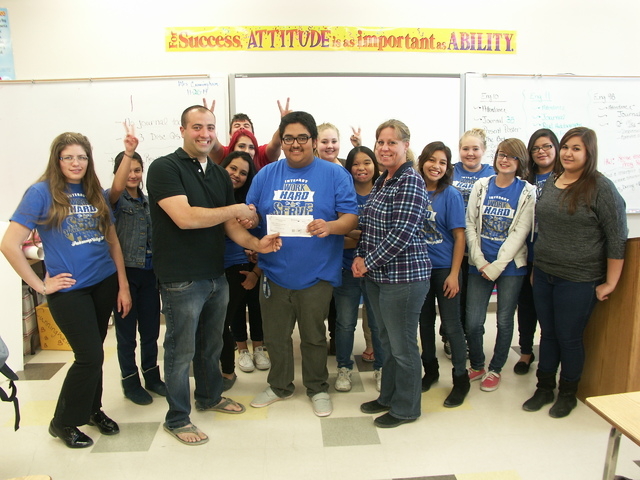 Checks were presented to the Pahrump Disability Outreach Program and the Symphony Animal Foundation, who received checks of $165 and $400, respectively.

Pahrump Disability Outreach Program, which is affiliated with the National Down Syndrome Society, is a nonprofit organization supporting families of local children with cognitive disabilities. The Symphony Animal Foundation, is a no-kill shelter planning to open next month, until a forever home can be found for them.

On Nov. 20, representatives from both organizations received a check from the club to help with costs associated with running the respective agencies.

“I was so surprised when I got the phone call because I had no idea that they even did a fundraiser for Symphony,” founder Laraine Harper said. “These kids are wonderful and it is so refreshing to see a group of kids doing good things. Nobody really sees what the schools are doing. They are turning out such great kids.”

Harper said some of the funds will help to provide additional education on responsible pet ownership, with an emphasis on spaying and neutering pets.

“The $400 donation was very generous and it just floored me,” Harper said. “It’s going to go for a lot of things like spay and neutering the animals we have in foster care. It will also go to feeding the animals and some of it will go to construction costs, but we are now at the tail end of that. From there on out, it will be maintenance and care.”

The Pahrump Disability Outreach Program was founded by two local parents who have disabled children.

Co-founder David Boruchowitz said it wasn’t long after his child was diagnosed with a disability that he and co-founding parent Paula Cooper learned there was no local support for other families in the community.

Boruchowitz praised the efforts of the high school club for their tireless work.

“They originally helped us with our annual Pumpkin Days, where they volunteered and were some of our best volunteers that we had and now they’ve donated money to our organization,” he said. “Obviously we are very appreciative and grateful for their willingness to serve our organization as well as the community.”

At present, Boruchowitz said more than two dozen families are involved in the program.

“The parents really like the program and appreciate having a real support group in the community,” he said. “Right now we are up to about 30 families who are receiving our information and we’ve partnered with Dream Therapies to provide services here, and they are seeing dozens of children.”

Pahrump Valley High Interact member Christian Apolinar said much of the money raised came from recent fundraisers. The money for the outreach program was raised through a bake sale, and the foundation donation came through a Rotary Club booth at the Fall Festival.

Cooper said the $165 donation will help the organization to promote the outreach program.

“We are looking at getting more brochures to spread the word about PDOP throughout the community,” she said. “It also benefits the families of children in the organization. The slogan, ‘Reaching for the stars, and settling for nothing less’ has become the center of this organization and its goals and dreams for those in the community.”

Cooper also said parents wanting more information on Pahrump Disability Outreach Program can contact the organization at 702-516-0847, or email the agency at staff@pdop.info. Mail can be sent to P.O. Box 2418, Pahrump, NV., 89041. The group’s meetings are held on the last Tuesday of each month at 2340 E. Calvada Blvd. #D.