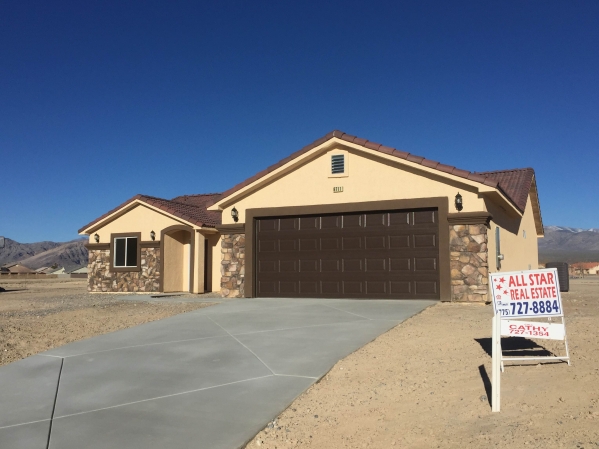 January started off the new year on a positive note for real estate in the area as almost double the amount of homes were sold compared to the same time period last year.

There were 33 single-family units sold in Pahrump in January, which was an 83 percent increase over January 2015 that saw 18 residences sold in the valley, according to numbers released by the Greater Las Vegas Association of Realtors.

The volume of homes increased dramatically over last year, but the average amount a home was sold for fell slightly this January as the average home was sold for $173,462, compared to last January with an average sale price of $178,452. Those numbers represent just a 2.8 percent depreciation of the value of sold homes over the last year.

All-Star Realty owner Cathy Slaughterback said that she has seen numbers that support the GLVAR’s findings and said it was busier than in years past during the start of a year.

“Normally it looks busier in the wintertime because of the snowbirds. Even if they’re not buying, it looks like more of a bustling city because of all the activity, as opposed to the summer with the heat,” Slaughterback said. “We weren’t quite as busy in January but we have picked up from last year and it’s a steady upslope.”

“The holidays always do good for us,” Washington said. “Everyone thinks that it slows but it doesn’t.”

According to Washington, the increase of homes sold in the valley can be attributed to one simple factor.

“I just think that the economy is getting stronger,” she said. “People are feeling more comfortable, prices are going up and people are trying to get in.”

Slaughterback thinks that the main reason for the rise in sales in town is result of the higher prices over the hump.

“Because Las Vegas is ridiculous in their prices again and they’re about ready for another fall,” she said. “They keep building.”

Although building of new homes in town has slowed over the past few years, Slaughterback said that there are a few new home sites planned to go up this year.

“There are about four or five being built, yes, they have started to build again,” she said. “AVCO is building, Morales is building, there are a couple of smaller guys doing it. The big guys aren’t doing so much, the small guys are.

“So there is some activity yes, from no building, to I would guestimate maybe five houses being built.”

Slaughterback sees the increased home sales in the area continuing, largely in part to the pending presidential election in November.

“It (home sales) will always continue up in an election year,” she said.

With 2016 kicking off on a positive note, the trend is a continuation of what 2015 saw, as 408 single-family residential units sold, which was a jump over the 344 homes sold in 2014, representing an 18.6 percent increase.