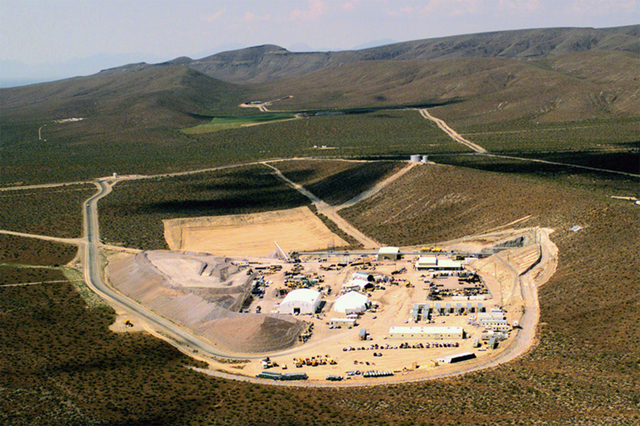 WASHINGTON — An Illinois congressman says he is planning to revisit Yucca Mountain this year as part of an effort to revive the Nevada site for nuclear waste disposal.

Republican Rep. John Shimkus and two other members of the House Energy and Commerce Committee briefly toured Yucca Mountain in April 2011, shortly after the proposed repository area was shut down by the Department of Energy. Shimkus, chairman of the House environment and the economy subcommittee, told Energy Secretary Ernest Moniz at a budget hearing Wednesday he was planning to go back.

Shimkus spokesman Jordan Haverly said travel dates have not been set and planning has not started for the trip. Nye County Commissioner Dan Schinhofen said the county would be happy to host congressional visitors as it did on the previous trip, which included a tour of the county’s “Yucca Mountain Information Center” in Pahrump.

At the hearing, Shimkus asked Moniz for cooperation by the Department of Energy, which still oversees the Yucca site that has been fenced off to visitors and shut down.

“I hope you will give us all opportunity and make it easy for us to get there and get the door open,” Shimkus said.

In 2011 the congressional delegation spent less than an hour at the site, which cost $15,000 to open and prepare for the entourage that also included a dozen staff members and Department of Energy officials. A government contractor checked the site for radon and to ensure the exploratory tunnel into the mountainside was safe even for a short walk.

The lawmakers, who wore hard hats and protective boots, ventured about 30 yards into the tunnel, once the defining feature of the multibillion-dollar program to develop permanent storage for 77,000 tons of highly radioactive waste.

At the time, Sen. Harry Reid and other Nevada lawmakers who oppose Yucca Mountain called the trip a big waste of taxpayer money. That sentiment remains.

“If Mr. Shimkus wants to come spend money in Nevada, then by all means,” Reid spokeswoman Kristen Orthman said. “But what he will find at Yucca Mountain is a boarded-up, closed facility. Yucca Mountain is dead and no amount of visits by Mr. Shimkus and the pro-Yucca fanatics will change that.”

President Barack Obama terminated the program shortly after taking office, and the Department of Energy now focuses on finding interim sites that can hold nuclear waste while it searches for a new repository.

It needs legislation by Congress to shift entirely away from Yucca Mountain.

At the budget hearing Wednesday, Shimkus berated Moniz on the department’s move away from Yucca Mountain, as he does at every opportunity. He said nearly $9 billion the DOE has budgeted for nuclear waste work would be better spent trying to soften Nevada’s long official opposition to the project.

“The administration needs to appreciate there is change occurring in the state of Nevada,” Shimkus said. He pointed to freshman Republican Rep. Cresent Hardy, who said after his election he would support Yucca Mountain “if everything was safe.”

Several weeks later, Hardy told an audience in Pahrump he was “not for or against Yucca Mountain” but “I think we need to be in the game.”