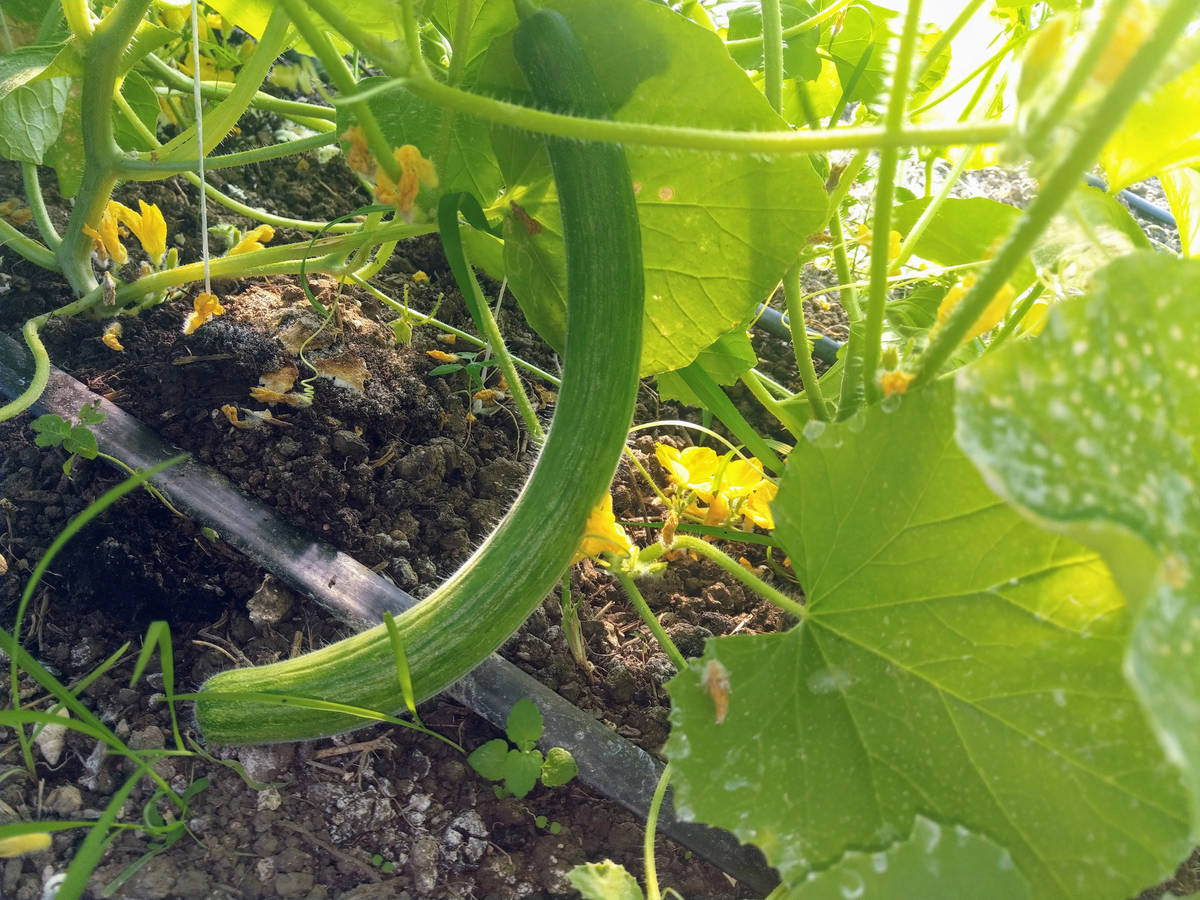 Getty Images Armenian cucumbers can be hard to see in the garden. Growing them on a trellis can help you spot them more easily.

Growing cucumbers in our neck of the woods can be quite a challenge. Even worse, if not grown in just the right conditions, your hard work may simply result in a bitter, inedible fruit.

Fortunately, here in the desert there is a cucumber that flourishes all throughout our superheated summers and will never become bitter. The Armenian cucumber is not a cucumber at all, but rather a member of the muskmelon family.

The thin-ribbed skin of Armenian cucumbers, also called yard-long cucumbers, take on a pale green hue, which is much lighter and more tender than contemporary cucumbers. There are now also dark-skinned varieties that can be purchased at various seed stores online. Their appearance, texture and flavor are close to the better-known English cucumber.

Though they are a melon, they taste like just the cucumbers we know and love. They are not suited for pickling, which is a shame given how prolific they are once established. Armenian cucumbers are excellent for use in fresh salad and for juicing.

Armenian cucumbers can be seeded indoors in early to mid-March and transplanted to the garden once temperatures are consistently above 65 degrees at night. Alternatively, you can direct seed them into the garden in mid-to-late May. Another round can be direct seeded in the garden in late July to early August.

Amend the soil with finished compost at least one to two weeks before planting. Space the cucumber seedlings at least 1 foot apart. If direct seeding, plant two to three seeds together also 1 foot apart at a depth of 1 inch. When the seedlings are 4 inches tall, thin them to just one plant every foot.

After planting, water the seedlings or seeds in well, leaving the soil damp but not flooded. Keep the soil moist, watering as needed. Covering the soil with a light-colored mulch such as straw will help preserve moisture. Water the soil near the roots and avoid overhead watering to prevent disease issues such as powdery mildew.

To trellis the vines, simply wrap the them around the support of your choice in the direction that they naturally want to travel. Some great options for trellis material are bamboo poles laced into an A frame, a metal frame made from electrical conduit and fitted with trellis netting, or my personal favorite, a chain link fence.

Common problems that may occur:

Though Armenian cucumbers are a melon, they can be affected by squash bugs. Keep an eye out on the underside of the leaves for the characteristic brown diamond-shaped cluster of round eggs that squash bugs lay. If you see them, simply wipe them away from the leaf with your finger or a cloth. If you notice adult squash bugs, kill them on site by squishing them or dropping them into a bucket of soapy water.

Squash bug nymphs are harder to control and their swarms can take down a plant in just a day or two. Some gardeners I know use a handheld vacuum to vacuum them up. Another method that will help you catch them is to flood the base of the plant with water. The squash bugs will crawl to the top of the plant making it easier to dispatch them.

If you notice that the fruit dries up and falls off shortly after forming, this can be a sign of poor pollination. Planting flowers in your vegetable garden will help attract pollinators. Basil is a great companion to plant with trellised cucumbers and will give you an additional harvest in the same amount of space. Another good choice is creeping thyme. It is not only an edible culinary herb but is a very attractive flower for pollinators.

Once you see that the small yellow flowers have formed into fruit, check on them daily. Armenian cucumbers can grow 8 inches in a single day when given an abundance of water. If you go out of town for a few days, you could return to a baseball bat-sized overgrown cucumber.

I find that once I spot the fruit growing, it is ready for picking within three to four days. At that point, it has reached a length between 12 to 18 inches. When picked young, the delicate fruit is nearly seedless.

To harvest the cucumber, gently clip the stem from the vine with a pair of shears or a knife. Leave a few inches of stem attached to the cucumber.

The cucumbers will keep well sitting on a kitchen countertop for a few days or up to a week in the refrigerator. I have not found a great way to preserve Armenian cucumbers for the long term, so I encourage you to enjoy them fresh while they are in season.

By growing the appropriate variety for our climate, you can easily grow more cucumbers than you need. Like zucchini, your friends and neighbors may get tired of receiving your extras. If you or your friends have chickens, they would be more than happy to relieve you of your excess bounty.