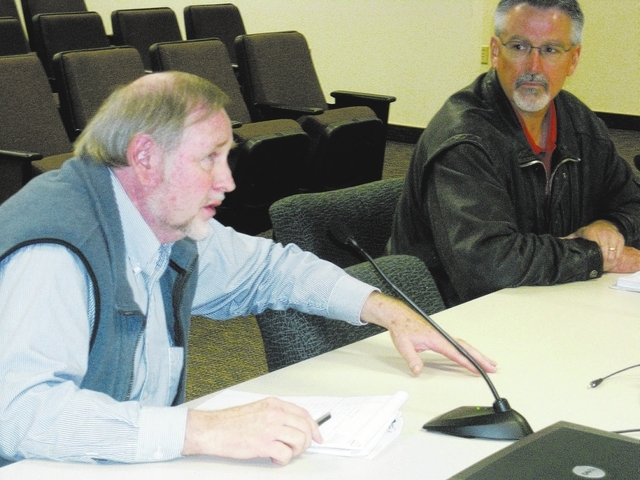 The agenda item was supposed to be about merely altering the impact fee ordinance to allow payments in installments, but two county commissioners Tuesday ended up voicing their opposition to the fees.

The Nye County impact fee ordinance of 2005 imposed fees totaling $1,961 on the construction of a single-family detached home, with fees on a sliding scale for commercial projects based on square footage. The Nye County School District also has a $1,600 residential construction tax. Commissioners imposed a moratorium on impact fees for two years, in 2012 and 2013, with the hopes of attracting businesses that never came and the moratorium was allowed to expire Dec. 31.

Payment of the impact fee was formerly required when taking out a building permit. Bill 2013-13, passed by a 3-2 vote Tuesday, would defer full payment until the certificate of occupancy is issued. A 10 percent discount, however, would be offered to developers who pay the cost up front. Commissioners Butch Borasky and Donna Cox voted against.

Commissioner Frank Carbone wondered if impact fees could be used for a senior center or an animal shelter. County Manager Pam Webster said the county could amend the categories the money is used for, but District Attorney Brian Kunzi said the spending still has to be related to the impacts the growth in the community is causing.

“That’s the whole purpose of impact fees, it’s to pay for government services that are required. You’re going to make a nexus back to the growth. You can’t just throw it around willy-nilly,” Kunzi said. “The problem isn’t growth in the valley, it’s the specific growth being targeted by the impact fee. You have a large development that comes in, money’s got to come in to do road improvements or things of that nature that are necessitated by that.”

The bulk of the impact fees, $1,298 per residential rooftop, go toward street improvements. They funded the widening and repaving of Homestead Road and the traffic light at Highway 160 and Homestead.

Nye County Sheriff Tony DeMeo just received permission to use $401,000 from the $137 impact fee paid his department per rooftop on a training center building for sheriff’s deputies to fire “simunitions” in different scenarios. Carbone made a reference to that request and the sheriff’s department history of overspending their budget saying, “I would rather have those fees go to something we can really use it for other than for services that continually overrun their budget.”

Borasky said he didn’t agree with impact fees and said there are home builders who have to pay the fee simply because they’re within the line designating the Pahrump Regional Planning District. He said the impact fee ordinance was drawn up haphazardly, too quickly and not well thought out at a time when housing construction was booming.

“I think this is a little soon to bring this back, if ever. It does equal about $4,000 between the school district and the county before you build a house on your own,” she said. “It only applies to certain areas of the county, it doesn’t apply to the county overall, so therefore it’s not equal. Until it gets equal or we do away with it, at this point we should be paying people in businesses to move here, not impose charges on them.”

Commissioner Dan Schinhofen said this bill makes it more flexible and improves the ordinance. But he invited Cox to introduce a bill to impose impact fees countywide. Schinhofen said if the developer doesn’t pay the fee, residents will.

Town of Pahrump Finance Director Mike Sullivan said the impact fee ordinance was drawn up after a study by Tischler-Bish Associates on the equitable way of paying for the cost of providing government services. He warned about lawsuits if the county changed the ordinance without redoing the study rationalizing the fees.

By requiring only some people to pay impact fees, Sullivan said, it’s like, “I’ve paid my impact fee so my kid can be here, yours have to get off the playground.”