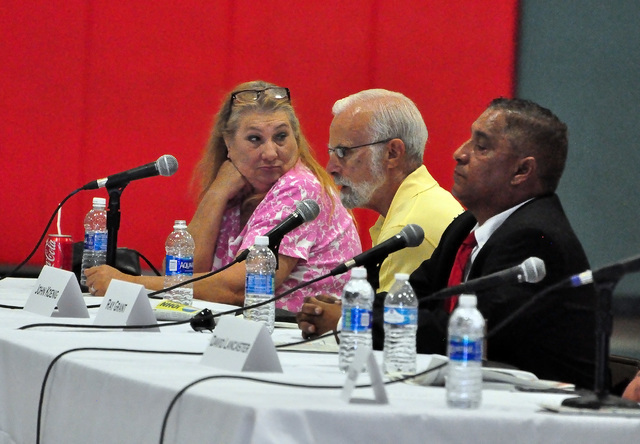 Horace Langford Jr./Pahrump Valley Times John Koenig, center, discusses the issues facing the county during the GOP primary debate in May. He is facing a former Pahrump Town Board member in the general election Nov. 8.

Koenig, a Republican running for the District II seat, suggested he’s more fiscally responsible than his Democratic opponent. This is the only contested commission race on the Nov. 8 ballot.

Kulkin’s leadership when he was chairman of the Pahrump Town Board several years ago helped lead to the town board’s disbandment by voters and county commissioners, Koenig said.

“I am different because Harley is always going to be Harley,” Koenig said. “He is still in favor of incorporation and he wants the town board back. He also wants to build Harley World. Harley and the rest of the town board spent upward of $300,000 just for a report. ”

Koenig was referring to a proposal between the town of Pahrump and Los Angeles-based Contour Entertainment for a multi-phase entertainment and tourist destination known as “Adventure Springs.”

The town spent more than $289,000 in areas such as build-out concepts and financial analysis for the project. For their effort, the town received artist’s renderings and reports about the scope and feasibility of Adventure Springs.

Additionally, officials with Contour suggested the town should incorporate due to the discord with the county.

“I am not in favor of incorporation even though there are things that we gain by incorporation,” he said. “If you read the reports that were done years ago, they show that taxes go up. I don’t believe there are enough people in Pahrump who want incorporation. You can’t burden them with the extra costs.”

Another difference Koenig noted was the issue of re-establishing the town board.

He is firmly against the idea.

Koenig also mentioned the fiscal impact of returning to a town board form of government.

“Right now I don’t see any reason to mess with that,” he said. “We are building money in the coffers of the town that we can use for the fairgrounds or other things that people want instead of spending money on another town manager and everything that goes with that.”

Experience and a firm grasp of the issues, Koenig said, are very important to handling the job of a county commissioner.

He has served as chairman of the Pahrump Regional Planning Commission, as well as being a member of the Nye County Regional Transportation Commission.

“I have seen a lot of people go into other governmental seats who have never been to a meeting and it takes forever to bring them up to speed,” he said. “I can walk in there, sit down and be the chairman on day one if that’s what everybody wanted. It’s not going to happen but I could run those meetings as well as they do.”

Though the issue of water and water rights has been a topic of concern for many in Nye County, Koenig said there is a more important issue he hears about from area residents.

“People want the roads fixed and they are tired,” he said. “We are almost caught up on fixing the potholes. Homestead Road is about ready to get done. We got the right of way and I believe the engineering has been completed as far as flood control in that area, because that is a major problem. Water is still an issue in town and I have some ideas on the water situation but I’m waiting to see what the Legislature does.”

Though Koenig said he has absolutely no problem with medical marijuana in Nye County, he is still weighing the benefits and risks of legalizing recreational marijuana come November.

“At this point, I am undecided on recreational marijuana,” he said. “There are pluses and minuses there. I hate to look at it as just another source of income because that’s not the way you want to look at stuff like that.”

Koenig defeated four challengers in the GOP primary, taking 56 percent of the vote. Kulkin was the only Democrat that registered to run.

The winner will take over the seat being vacated by Frank Carbone, who decided against running for a second term.