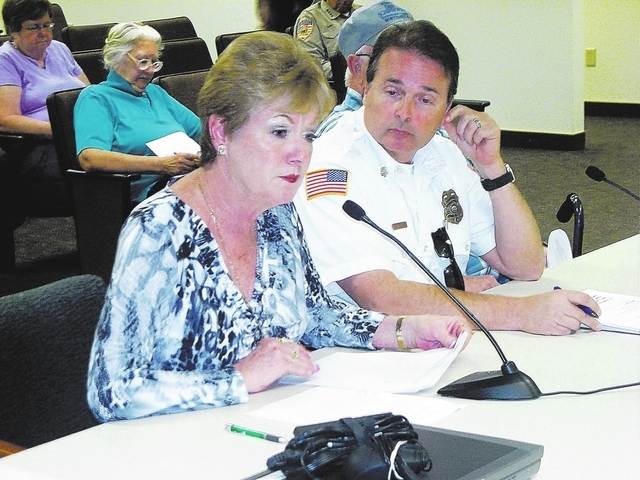 Former town manager Bill Kohbarger will not oversee the proposed Pahrump General Aviation Airport after all.

The news comes nearly three months after he agreed to continue to work on the project after accepting a Human Resources position with the City of North Las Vegas.

A subsequent shake-up in that city’s management offices led to Kohbarger’s dismissal after roughly a month.

On Monday, Holecheck confirmed that Kohbarger expressed his desire to cut ties on the project.

At the same time, the former mayor of Mesquite said she is quite familiar with the details surrounding the planning and machinations of getting a general aviation airport project off the ground and will take the reins.

“Mesquite was also desirous of a GA airport and they were actually in the process for over 10 years and it takes a very long time. People often wonder why we are working on this right now because we may not need it yet but the point is airports take an incredible amount of time to get through all of the environmental work and all of that. It may not take place for another five years or so. As we all know the wheels of government grind slowly but I do have experience with GA airports,” she said.

Earlier this summer, the town board voted to allow Kohbarger to continue representing the town for the proposed airport.

Shortly after his final day as Pahrump’s town manager, Kohbarger discussed why he wanted to remain on the project after numerous delays.

“I have put in a lot of hours on that particular item. It’s a very good project and I don’t want to see it slow down in any way, shape, or form,” he said at the time.

At present, Holecheck said the town is now awaiting the results of a financial feasibility study for the project.

“It is so important to find out where our revenues are coming from and if we can sustain an airport. You don’t think in terms of just an airport, you have to think in terms of what kind of businesses can we attract around an airport because we are probably going to lease that property out which would create a revenue stream so there are lots of things to look at right now,” she said.

The company tasked with creating the feasibility study is QED Consulting which the town chose to hire earlier this year.

Holecheck said some of the funding will come from room tax revenues.

The town manager also said that the size of the project was recently scaled back by a federal agency.

“The town was wise in taking a percentage of those revenues which was about two percent. They have been putting that aside and we recently got information that the BLM wants to lessen the amount of acreage. Originally in its entirety the airport was going to be 2,650 acres of which 500 to 600 acres would be the actual airport. They (the BLM) now want to lessen the amount of acreage to 1,997 acres,” she said.

Additionally, Holecheck said yet another hurdle has been put in front of the project as of late which pertains to the wildlife at the site located along Gamebird Road on the south end of town.

“The BLM has also included an ACEC (Area of Critical Environmental Concern) which has to do with a certain bird that’s out there. The problem is the ACEC next to airports can be problematic because there are wind and noise issues and until we get that straightened out with BLM, we really don’t know what’s going to happen but I think the county was as concerned as we were about where the ACEC is in relation to the runway,” she said.

For more than 20 years, the airport project has seen its share of delays and setbacks.

In June, the town lost a federal grant totaling $600,000 due to inactivity.

The Federal Aviation Administration withdrew the grant due to the BLM’s slow movement on the airport which included an Environmental Impact Statement (EIS) at the site.

Notwithstanding the snail’s pace on the project, Holecheck contends that it is indeed moving forward.

“We are in somewhat of a holding pattern but we are doing what was required by the grant and we have to complete the financial feasibility study and that is really important for the people. We have to figure out if we are actually going to be able to support this project financially,” she said.