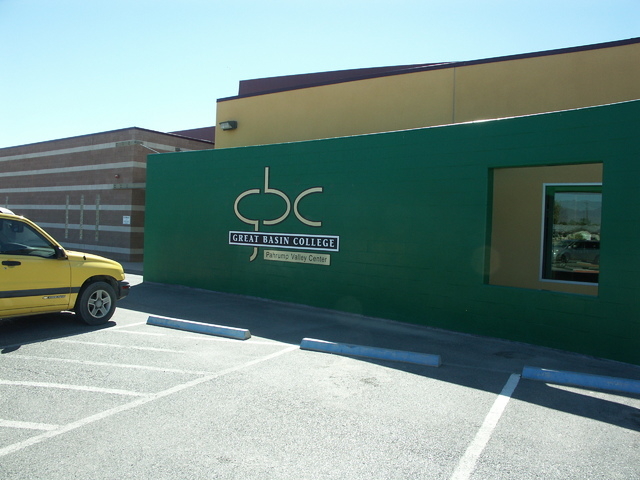 WASHINGTON — After years and a few attempts, Congress appears on the verge of passing a bill granting 285 acres of land for a Pahrump campus of Great Basin College on the southeast end of town, near Carpenter Canyon Road and Highway 160.

“It’s been a long time coming, this bill has been in the works for several years and it just had one little obstacle after another. Great Basin College has been working through BLM to get the land transferred but that was still going to take some more months, so it’s really a welcome gift,” said Mark Kimball, a retired school administrator and the head of a committee working on the land transfer.

The Elko-based college has a building on the Pahrump Valley High campus it shares with the school district as a technology center.

An agreement reached last week on Capitol Hill clears a path for a sweeping set of federal land alterations that would establish new wilderness and open thousands of acres to economic development in Nevada.

Western land legislation that would be cleared for passage in the final days of Congress would establish a Tule Springs Fossil Bed National Monument in the northern outskirts of the Las Vegas Valley. It would grant long-sought protections to a patch of desert that has been prized by paleontologists for its trove of prehistoric artifacts, and by community leaders for its potential attraction to tourists.

The measures were among more than five dozen natural resource initiatives that lawmakers agreed to attach to an annual defense program authorization bill — one of the few must-pass bills remaining before Congress adjourns.

In September 2008 U.S. Sen. Harry Reid, D-Nev. introduced the Southern Nevada Higher Education Lands Bill in the Senate, which included the 280 acres for the Great Basin College along with 2,000 acres near Nellis Air Force Base to the University of Nevada, Las Vegas and 40 acres for the College of Southern Nevada. Nye County Commissioners had already contributed $1.5 million for a community college in 2006 and rezoned the property for community facilities. At the time Reid called the bill “a landmark for Nevada’s public education system.”

In 2012, members of Nevada’s congressional delegation reintroduced the Southern Nevada Higher Education Act of 2012, to convey the property. It also failed.

Kimball expressed gratitude to both Nevada senators for marshalling the bill through this time.

Now the campus promoters plan to form a capital campaign to raise funds for the buildings and infrastructure. Kimball said they will form a Great Basin College Foundation Board, they plan to meet with Great Basin College President Mark Curtis in January to discuss the details.

“We had a lot of agreements in place to do some of the work that’s donated. We’re hoping to go back and tap some of those resources. Over time it will have to be a combination of public-private funds and we’re in the beginning to study that process right now,” Kimball said. “The big news is we finally have the land coming and now we can finally get to work.”

Committee member Allan Parker, a business consultant for the Nevada Small Business Development Center, said, “having worked on that for years and years and years it was pleasing to see some light at the end of the tunnel.” He said the funding should be available by the end of the 2015 fiscal year, which is Sept. 30, 2015.

“It looks like if all goes well that this land probably should in the not too distant future be under the jurisdiction of Great Basin College,” Parker said. “That’s the most important part of the process obviously is obtaining land. But you know it’s rural land. So even when we get it from BLM there’s going to have to be some infrastructure put in, roads and utilities and obviously the beginning of a building process.”

The college advocates are pushing for what funds are available at the federal, state and local government level, besides private groups and sponsorships, he said.

That building was constructed as part of a $3 million U.S. Economic Development Administration grant in 1999, as part of a proposed high tech corridor from Pahrump to Tonopah, outlined by Senator Reid, after downsizing at the Nevada Test Site.

A $1.3 million sub-grant agreement with the Community College of Southern Nevada to construct the 33,000-square-foot center to house the High Technology Center and Distance Learning Center was included with the grant, the current building opened in September 2001.

The agreement was negotiated by Senator Reid and other senior leaders of the House and Senate and of the armed services and natural resources committees.

“I’m pleased that important land bills for Nevada’s economy have been included in the negotiated lands package,” Reid said. “Working with the delegation we are able to foster economic development while protecting Nevada’s natural resources.”

“It is a good day for Nevada and those who believe we can still do big things for our state,” said U.S. Rep. Steven Horsford, D-Nev.

“It was not an easy lift but the needs of Nevada were addressed, and I’m happy to achieve this goal,” said U.S. Sen. Dean Heller, R-Nev. “As this legislation becomes law, it will not only spur economic development in our state but enhance national security as well. Those are things we should all be proud to accomplish.”

Heller said Wednesday he and U.S. Sen. Jeff Flake, R-Ariz., made a pitch to Senate Republicans at their Tuesday weekly luncheon for the bill, which contained projects across the west.

“We tried to explain to the rest of the conference how important these bills are for job creation in the West, where the government owns so much public land,” Heller said. “It was a passionate plea.”

Among other provisions in Nevada, the current package:

• Allows the sale of 11,500 acres of land in Lyon County to the city of Yerington to support development of the Pumpkin Hollow Copper Mine, advertised as a major jobs generator in one of the poorer counties in Nevada.

• Creates a 49,000 acre Wovoka Wilderness in the largest remaining tract of wild country in Lyon County.

• Creates a 26,000-acre Pine Forest Range Wilderness in Humboldt County, one of the most highly visited outdoor recreation areas in the region.

• Expands the Red Rock Canyon National Conservation Area in Clark County by 1,530 acres at the northwest corner of the Las Vegas Valley.

• Conveys 660 acres of federal land to the city of Las Vegas and 645 acres to North Las Vegas to establish “job creation zones.”

• Conveys another 400 acres of BLM property within the Fallon Naval Air Station to the Navy for base housing.

• Releases 10,240 acres along Sunrise Mountain that had been under study by the Bureau of Land Management but was rejected as possible wilderness.

• Conveys 1,211 acres within the BLM’s Nellis Dunes Recreation Area to Clark County to be transformed into a park for off-roaders.

• Sets aside 1,886 acres for use by the University of Nevada, Las Vegas for a new campus in North Las Vegas.

• Grants 1,329 acres to the city of Carlin, in Elko County, for development while giving 1,745 acres to Storey County and 9,114 acres to Fernley in Lyon County.

• Conveys nearly 300 acres to the city of Elko for a motocross park.