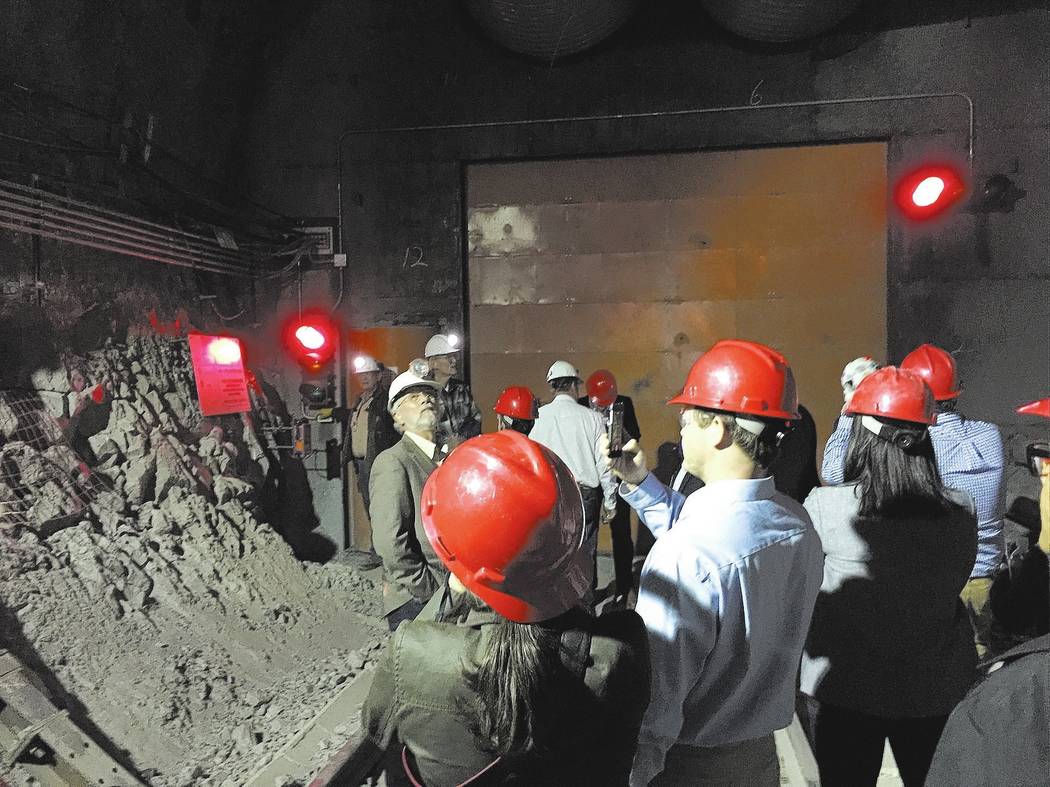 Congressional staff members, media and Department of Energy employees during a congressional tour of the Yucca Mountain exploratory tunnel on April 9, 2015. Special to the Pahrump Valley Times

In a presentation to a joint meeting of the Senate Committee on Finance and the Assembly Committee on Ways and Means on Monday, Halstead said Nevada plans to fully adjudicate 218 admitted contentions in opposition to the Department of Energy’s license application and submit 30 to 50 new contentions based on new information and the Nuclear Regulatory Commission Environmental Impact Statement Supplement.

“At best, the legally-mandated licensing proceeding is about halfway done,” Halstead said in a statement following the meeting. “And the first half is only preliminary actions that set up the rules for the proceeding, identify the issues that need to be addressed, and accept documentary evidence from various parties. But none of the issues important to safety nor the key issues related to environmental protection have been resolved.”

Halstead said the process could cost Nevada between $8 and $10 million per year over a five-year period.

Halstead said his assumption, based on past experience including the Congressional appropriation in fiscal year 2010, is that the federal government would provide about half of the money required by the state, and all of the money provided to the affected counties and affected Indian tribes. The state would need to provide the other half of its own projected need, about $4-5 million per year, for up to 5 years.

Nevada estimates over 400 hearing days would be needed to adjudicate 250 contentions, plus time for discovery, motions and appeals, thus requiring four or five years for a legally-mandated proceeding, according to the documents. The process would cost the DOE and the regulatory commission $1.66 billion and $330 million, respectively.

Halstead said the Commission on Nuclear Projects believes that the next two years will be critical for Nevada in preventing the resurrection of Yucca Mountain and in protecting the state’s interests “in the increasingly likely event the full licensing proceeding is restarted.”

“Senator Reid’s retirement, coupled with other changes in Congress and the executive branch, are likely to result in concerted efforts by Yucca Mountain supporters to restore funding for the DOE repository program and the NRC licensing proceeding,” Halstead said in a presentation.

Nevada’s top officials, including Gov. Brian Sandoval and Attorney General Adam Laxalt, have opposed the project. Halstead said that the governor and Legislature must assure that the attorney general and the Agency for Nuclear Projects have sufficient funds to “effectively represent Nevada in NRC’s Yucca Mountain licensing proceeding.”

Yucca Mountain currently has only a five-mile exploratory tunnel that can’t be used for disposal. The facility doesn’t have waste handling facilities or state water permit. It also doesn’t have construction authorization or railroad. Its BLM land withdrawal is currently expired.

The plan to entomb 77,000 tons of spent nuclear waste in Nye County has been in limbo since the Obama administration mothballed the project in 2011.

The Trump administration has yet to make its stance on the proposed repository.