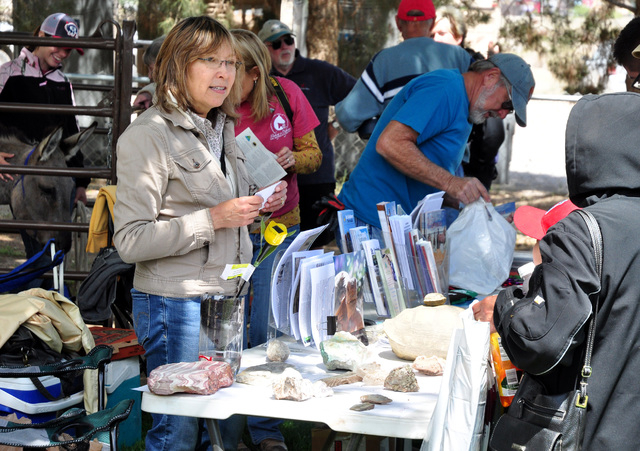 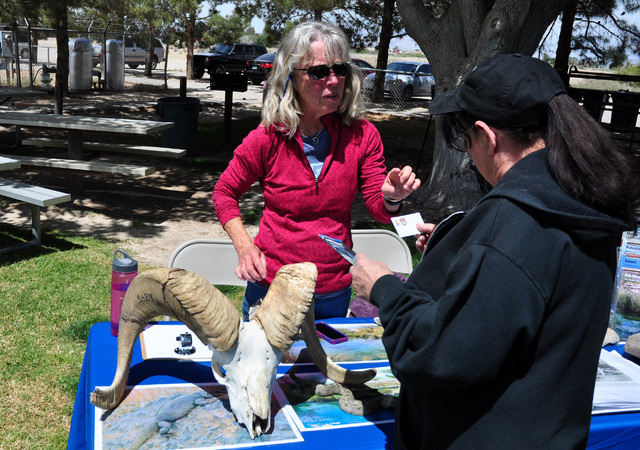 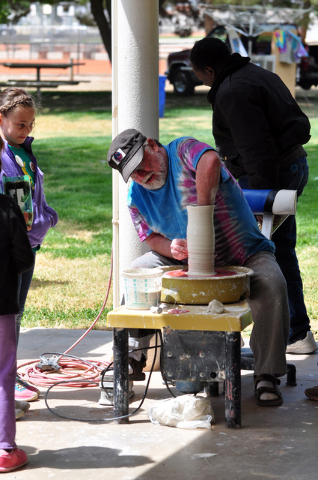 The annual event is organized and coordinated with officials from several state and federal agencies including the Bureau of Land Management, the U.S. Forest Service and the U.S. Fish and Wildlife Service.

Volunteers from Ash Meadows National Wildlife Refuge and the Red Rock Audubon Society, as well as the Southern Nevada District Fire and Aviation Division were on hand to provide information on their activities.

Teresa Skye, volunteer for Ash Meadows, said many visitors stopped by her exhibit to learn more about the new visitors’ center at the refuge.

“The brand new visitors’ center has a lot of exhibits and interactive activities for the kids to take part in,” she said. “It’s a very beautiful facility and everybody who goes there is just amazed and we hear nothing but wonderful comments. We also have a movie that tells visitors all about Ash Meadows. There is no cost to visit the new visitors’ center and it’s a great place to spend a Sunday afternoon with the family.”

Skye said many people on Saturday had questions about wildlife and some of the features at the facility, while noting that the new visitors’ center has actually increased the number of people who visit Ash Meadows.

“We have brochures about all the refuges at Ash Meadows and we have displays about our pupfish which is an endangered species,” she said. “I had many people asking us about all of our beautiful ponds and pools that you can walk out to. We get a lot of tourists from overseas, and in fact, we had someone from Israel over the other day. We have had visitors from France and Germany pretty regularly.”

After forming roughly a year ago, the Red Rock Audubon Society promotes the protection of birds and other wildlife through education, conservation and recreation.

Officials set up an interactive game for children in grades first through fifth.

Volunteer Nancy Chang said visitors on Saturday were eager to take part in the exhibit.

“We are showing things that the Junior Audubon Society has been doing for the past year,” she said. “We are a new club here in town and it’s for grades one through five right now, but we hope to expand to different age groups. We have learned a lot about birds and the focus today is what birds eat. The kids learned that the actual shape of a bird’s beak determines what the birds feed on.”

Another topic Chang focused on was that of wild and domestic cats and how they have the potential to upset the balance of nature.

“One activity that we performed, was learn the difference between indoor cats and outdoor cats because many outdoor cats kill billions of birds every year,” she said. “A lot of feral cats do it, and some domestic house cats that are let out in the yard also kill birds just out of their natural instinct.”

With more than 90 members, club President John Allen said one of the main objectives of the club is preservation.

“We do our best to accomplish that and hand out materials about how to tread lightly,” he said. “We have adopted all of the trails on the west side of the Spring Mountain range and that seems to be going well. We also turn in a report of all the trails to let the U.S. Forest Service know what condition they are in. We also maintain them.”

Allen also noted that club membership is open to pretty much any four-wheel off road enthusiast in the Pahrump Valley.

“It’s not just a Jeep club it’s a four-wheel drive club which includes other vehicles as well,” he said. “If someone wants to become part of the club, we have our meetings on the first Wednesday of every month at the Elks Lodge at 6 p.m.