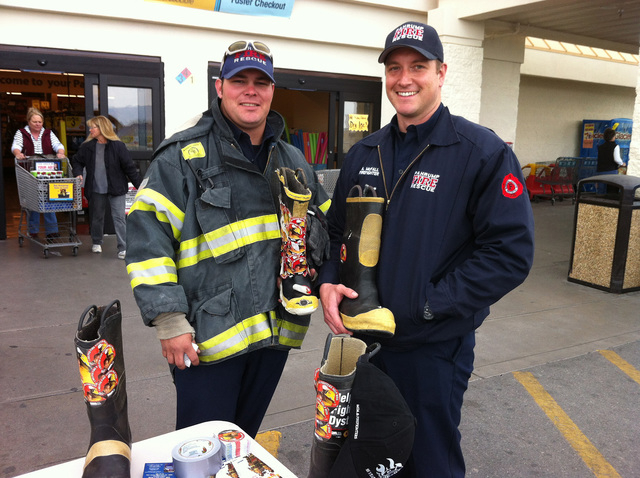 The annual event is the department’s major fundraiser for the association.

PVFRS firefighter Allen McFall said this week that fellow firefighters, with boots in hand will be canvassing the streets and area shopping outlets seeking donations today and Saturday.

He noted some of higher-end donations are met with a token of appreciation.

“We’ll be at the intersection of Highways 160 and 372. It’s the 60th anniversary this year. Any and all donations will be greatly appreciated. We have had people who give generous donations. We do have our regular residents who come up and give their generous donation get their yearly hat or T-shirt,” he said.

McFall also noted that the department will try to surpass last year’s total of funds raised though the boot drive.

“In 2013 we raised $5,273, which was pretty good. When we’re out in the streets we get a lot more people who will just grab their change from their ashtray. Every little bit helps. With so many people throughout the day, it all adds up. After the boot drive, we take the donations to the MDA office in Las Vegas where they count it all up,” he said.

Since 1954, firefighters around the country have managed to pull in close to $530 million for MDA, mainly through the signature MDA Fill the Boot campaign.

As a result, the International Association of Fire Fighters (IAFF’s) annual support allows the MDA to fund more than 250 research projects around the world.

Additionally, the funds are used to provide children afflicted with muscular dystrophy an opportunity for much needed recreation.

“The money is also used for a camp.” McFall said. “It’s an annual camp mostly for kids. Firefighters also sign up and volunteer a week of their time. Everybody who goes are changed. They really see where the money goes. The kids get to play and take part in numerous activities. It’s very beneficial in many ways,” he said.

The firefighter also said a number of local families are supported through the boot campaign.

“It’s a case by case basis so if one child needs a wheelchair, it’s supplied. If it’s something a bit more extensive, it is also provided,” he said.